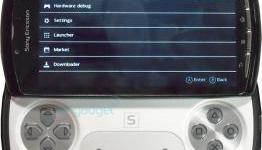 Earnings calls aren't usually that interesting, and that's doubly true when trying to listen via official translators. Still, we couldn't help but give an ear to Sony's fiscals, and sure enough, someone asked about our (still real) PlayStation Phone leak. We're not sure who answered since it's through interpreter, either Executive VP / CFO Masaru Kato or Senior General Manager of Investor Relations Division Gen Tsuchikawa (we're assuming the former).

dam i think sony works on to many things, they shud worry about our PSN and features to improve it >:(

how the hell should the hardware division improve psn?

I am getting pretty excited for the Playstation Phone.

Watch Sony pull an apple, and start overcharging for their products.

Then they'll pull a Microsoft and start overcharging for their software.

well technically sony has traditionally charged more than its competitors for thier products (although often the sony offerings were superior), apple just raised the bar....

sooo I should just buy a Dynex TV from Best Buy because it's just as good as Sony's TV's? The truth is that all major companies charge more for their products whether it's Microsoft, Sony, Samsung, etc. Just look at how much monster cable sells for. Sony's pricing is usually inline with other major hardware manufacturers. So don't start pointing the finger at Sony without acknowledging other major companies for doing the same thing.

lol.... fuck no that dynex tv is pure crap.... i meant comparable models.. you know high end compared to a high end model...

leave it to someone on the internet to take something out of context..

haha well I thought your comment was right on. I was actually responding to titanz comment about Sony becoming the new apple haha.

But yes I'm aware that Dynex is crap. I wouldn't touch that brand if they had a 55" for $300 dollars! haha.l It would probably die in a matter of minutes.

Who cares about this phone?

The psp 2 is where portable gaming is going.

It comes in tablets?!?

Yeah that sounds good, i was looking at maybe getting a Tablet ( Notion Ink Adam by android)but if i like this tablet then i might consider this one.

the psp 2 isnt coming in a tablet

I was talking about the actual tablet and referencing LotR.