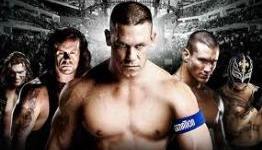 Making choices in the stories, never knowing what was going to happen in WWE Universe Mode, and seeing fans hold up signs packing the IGN logo are all really cool memories from this game. Sure, it feels like a suped-up version of last year's title here and there, but there's nothing wrong with that when the game is this much fun.

Oh yeah. An 8/10 totally warrants the death of a popular series. /s

Why? This is a great score

because THQ has done very little to improve this franchise....they're milking the WWE brand for all its worth its the madden of wrestling games

what you just described is the same as fifa, pro evo soccer, call of duty, almost every fighting game and the list goes on and on so should they all die to?

did you also notice that these games are among the few that usually sell fairly well? it's because the fanbase dont really want change, changing the game to much may put people off so as the old saying goes, dont fix what aint broke, especially if it sells millions without much effort

8/10 that's good enough for me. I'm still getting the game; although, I'm pretty sure ti should been an 8.5. Presentation should have been and 8.5 and gameplay as well as they really update a lot.

To be honest this is just another one of IGN's recent string of lazy reviews. I remember years back they used to be able to write several pages for reviews. But I'm digressing.

This review just wasn't very informative, I didn't learn much about the Story creation mode, whether it had any other changes than the sentence listed about it.

I find that a big issue as I remember reading at one point that the story now featured the ability to make branches for wins and loss situations, yet here I cannot see a single thing about this.

I'm very much near the end of losing any respect for this webiste, it's become so strange in the way it reviews games. Certain things not getting high enough scores in certain areas (GoW3 <> KZ2 for graphics) Whilst games like CoD get praised to the heavens.

edit: actually I've just found out where I read that infromation about story creator. IT WAS IN AN IGN PREVIEW!!!!
Seriously this review is a joke, there was so much more written about the game in an informative manner in their "why we're pumped" preview and they were genuinely excited yet all of a sudden. Nah it's not as good as the several hours spent with it previously.

Well Greg's fat ass is a horrible reviewer anyway in my opinion.

The one thing I really adore aboot IGN is how they praise the hell out of a game in a preview, but when it comes down to the review they'll shoot it down like it's a German Nazi. See the MoH review.

2007-2009 were pretty awful (I have bad memories of 07's horrible loading times), but 2010 was a return to form, though still not quite as awesome as Here Comes The Pain or '06. Can't wait for this one, so I can recreate some of my favourite Attitude Era moments.

Dude nothing can beat No mercy thats one of the best wrestling games ever made...They should just re release that game and make everybody happy.

the games only sell because of the huge WWE fanbase...THQ could not do those numbers with some unknown brand....its easy to move millions when u hide behind a brand thats known worldwide...the gameplay quality of smackdown vs raw games are below the N64 old school wrestling games..

Man you insult anything that's not focused on specifically the ps3.

They changed A LOT this year.

They need one based on Day of Reckoning

I could be crazy but the "new" WWE Universe mode sounds a helluva lot like Here Comes the Pain's career mode.

How can this game get an 8 for having the same crap every year? Oh that's right IGN get checks.

who keeps buying it every year? if you've played 1 wrestling game you've played them all. another symptom of the bad taste of today's gamers. skip these homoerotic antics this year and go buy castlevania or something.

And i for one am glad.

Each and every year they consistently score between late 70's up to late 80's.

I'm just glad that Austin is back and that this year he's not exclusive to one damn game store.

Yeah but Bret is now, and that sucks. The Best there is, best there was, and best there ever will be is exclusive to...Best Buy....ha. I hope they release him as DLC on live eventually, they did for Austin I think. I'm wondering if/when Owen will get in a game?

Series hasn't been good since 2003 (Here Comes the Pain)

They need to crank the difficulty back up. It's so easy on Legendary.

I agree, but the fight against Taker in RTW is said to be like an old school game when it comes to difficulty. One of the guys who worked on the game said it took him 15 tries to beat Taker. Lol that is gonna be fun.

The end of this series finally

proves that the series is still worth buying!

WWE Smackdown vs Raw: A Retrospective