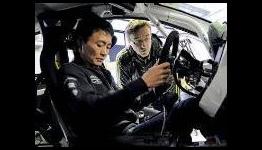 Mr Gran Turismo speaks on the eve of GT5's launch

The fifth instalment of the Gran Turismo PlayStation epic has slipped back from 5 November, probably to the first week of December 2010. But this month’s CAR Magazine – on sale now – reveals the new game’s hero car, the ultimate track racer designed by Red Bull and GT coders Polyphony.

The 249mph racer, the Red Bull X1 prototype, is a collaboration between legendary F1 designer Adrian Newey and Kazunori Yamauchi, the genius behind Gran Turismo. Yamauchi took time out from his round-the-clock work mastering the final game, to tell CAR magazine all about Gran Turismo 5.

A part of me think their delaying it a few weeks for promotional purposes, including everyone talking about it being delayed. Regardless when it comes out, I can`t wait. BTW, I heard Futureshop in Canada has a preorder offer the gives you the wired GT wheel w/ it for FREE.....Yeah. I`m calling to confirm, shortly.

Didn't Sony announce that they missed production date by 3 days or something? Also "Mr Gran Turismo" recently apologized for framerates dropping slightly below 60, maybe that's the reason for the delay?

Whatever the reason you can bet the turn 10 trolls will be hard at work trying to negatively spin it ;P

The whole framerates dropping slightly below 60 is old news. Kaz said that in TGS.

THe frame rate problem has been known ever since the rain effects were first shown off.
Kaz himself said that under certain circumstance the framerate would battle to remain steady at 60fps.

Maybe its the reason for delay, sure, but its not something that is last minute news.

GT5 only delayed 2 times. So its not delaysmo.

Waitng for this game is driving me bananas lol

still no date? really this silence from sony drives my crazy!

With no "new" release date this really just opens the door for potential buyers to get enticed by something else. Not only is it hurting GT5 potential sales but its killing Sony for the Holiday push as this is/was their only exclusive coming out beyond Move.

But even if they announce a date, they've pretty much proven time and again it shouldn't be trusted.

Until copies of GT5 get shipped out and I see them, then I really just won't believe it..

^ Yeah Im with you. Even if they tell me it will be out before the end of the year, I refuse to believe that until I see it on a shelf. Ive been saying spring 2011 for the past year, and I still believe thats when its coming out, regardless of whether they tell me otherwise. We have no reason to believe a word they say.

SEASON: A letter to the future Is Already One of 2023’s Must-Play Titles