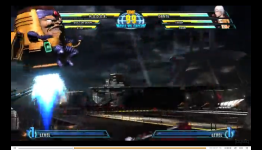 Modok VS Magneto: Marvel VS Capcom 3 video face off

While you can simply watch these two videos introducing MODOK and Magneto to the Marvel vs Capcom 3 cast, we wanted to simulate the experience of being at New York Comic Con. The Marvel Games panel was bursting with energy, with fans cheering on their favorite characters. Who would you want to play as? The obscure, but awesomely named and shaped "Mental Organism Designed Only for Killing" -- or fan-favorite Magneto? Let us know.

Why? What about Gambit, Carnage, Punisher, Blackheart?

Whos knows they might be coming later but Modok? wtf...

They have a certain quota of "weird" to fill, apparently. Not weird as in odd looking or anything, but weird as in "really, M.O.D.O.K?"

As for Magneto Vs. Modok, I don't think we have to debate about that fight: master of magnetism vs. a thing made almost entirely out of metallic machine parts.

meh , so many complaints and whining as usual with the reveals .

When they first added Blackheart to the games , do you really think that's what most Marvel fans wanted in the roster with so many big villains and heroes ?

Of course not , he was and still is a minor character even if powerful ... he's a wannabe Marvel introduced to adds some variety to constant appearances of Daddy Mephisto , Dormammu and a few other demons .

In comparison M.O.D.O.K is a regular marvel villain that appeared everywhere , including a few important arcs . He deserves a spot every bit as much as Blackheart .

He's there for a good reason i bet , he's been featured quite a lot again recently , especially in ms marvel , Hulk and captain america most recent stories . Ifanything , ti's at least good sign MS marvel might make the roster imo

MODOK still got various force fields and psionic power to defend itself .

Anyway the world would be a better place with Sinister in the game :p

Agreed on both front. I guess it'd be hard to nail down some moves for him though. Generic blast, teleport, then...?

True about the weirder choices though. I mean who, outside of Dr. Strange die-hards, would care or even know about Shuma Gorath? Still I am interested in having these guys in the games, where else do you see them outside of select issues of their respective nemesis' comics?

yeah Sinister's fighting has never really been fleshed out .
Besides telekinesis and energy projections , one could always have him play as a mind controller with a few summoned marauders clones for some of his specials ... but i dont think Capcom would go that road .

Some guest appearance would be cool however .

No one cared about Blackheart , Marrow , Shuma Gorath and a few other Marvel chars before they were added in the game .

Among most X-men fans Marrow was even widely hated , a poor excuse to have someone instable on the teams , a la Wolverine , with widely disliked design ... at least till the game .

I have not kept up with who all they are going to add to this game. But this is weird choice. I know they added Wesker, which is one of the people I have been wanting for a while. Now if we can just get Thanos, Carnage, or Loki I will be happy. :)

i dont think Carnage will be there ... he hasnt been relevant nor cool since the 90s , even if his return is planned in comics .

I dont even believe we'll see any spiderman foe , besides maybe some that became also avenegrs foes , like Green gobling and the current Venom .

Loki and Sentry could be awesome yeah ... i have even a feeling one of the two could be the potentially broken character Capcom refered to , with Loki's insane magic , and Sentry/void's dual personality and nature .

I just want carnage is that so much to ask for.

MODOK moves strangely. He almost looks like he doesn't belong there. Arthur is even worse though.

It seems its quite powerful despise its appearance, in fact its combat style is similar to Cable's(oh! no he is broken).