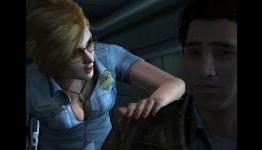 Connor Beaton writes: "Despite its four years in the market, during which it has seen the release of a significant number of violent games, Nintendo’s ground-breaking Wii console is still regarded as “kiddy”. Fortunately for you, we’re not judgemental, biased writers; we understand that the Wii has its merits and strengths in particular areas, just as the PlayStation 3 and Xbox 360 do. Therefore, what with Halloween coming up, we’ve compiled a list of our five favourite horror games on the Wii."

RE4?
RE:DSC?
those two seem like better choices then Ju-on.

I would have to say fatal frame 4. i know cuz i play it lol, my lil sisters were scared from me playing the game today. they jumped a few times. i did twice even tho I know it was so obvious lol

[Based on the Hit Film] Revisiting the Wii’s Immersive Ju-on: The Grudge Game

Silent Hill: Shattered Memories and the fears in your ears