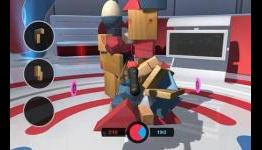 The PlayStation Move is finally available, after months of Kevin Butler’s confident hawking and tons of promotion by Sony. So far, the verdict is mixed (Sports Champions is a winner, while Kung Fu Rider grinds to a halt), but some games definitely show potential. Among them is the downloadable effort, Tumble, not only because of its cheap price ($9.99 compared to the other $40 titles) but also because of its concept.

WTF kind of a score is that? This is one of the BEST move games and the reviews are usually positive. For a $10 game it has the most intuitive controls and puzzles that keep you coming back.

I can recommend Tumble to anyone who likes to play with their buddies or girlfriends :) My girlfriend wants to play this more often that I do!

This line makes me laugh!

"That said, it’s not quite perfect. There were times when our blocks would either drop out of the stack completely or the physics would force the tower to tumble. It’s a rare occurrence, so it shouldn’t get in the way of your enjoyment. Still, be on the lookout."