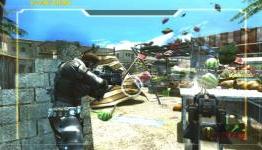 Motion controls such as those found on the PlayStation Move and the Nintendo Wii give you the option of bringing a very specific arcade genre into your home: the light gun game.

We've seen these games on Nintendo's system, but with Time Crisis: Razing Storm Namco, Bandai has the chance to further prove the PlayStation 3 can be a good home for the "kill everything on screen" games.

Razing Storm doesn't just include the titular game, it also packs in the arcade version of Time Crisis 4, as well as the little-known Deadstorm Pirates. For $50, that's quite the variety of games.

Awesome with some pirates
http://www.youtube.com/watc...

Its been known that Deadstorm Pirates would come with this game for a while now. How did this get approved?

This article is Preview of the games, not news.

Luckly not the bad pirates ;)

I am quite likely to purchase this fine product.

If i had more money i would of preordered it today when i picked up my move but i will be getting this day 1 how can you say no 3 really fun games for like what $40-$60 not a bad deal.

Why the PlayStation Move Failed

Killzone 2, Soul Calibur 5, Time Crisis: Razing Storm and more running on the PC thanks to RPCS3