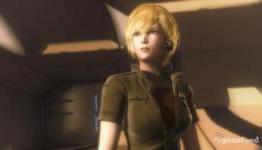 PTSD or Weakness: Real Experts on why Samus didn't Shoot

Stephen Kelley of Gamrfeed talks with an Army Veteran and a psychologist on their views on Samus's now infamous breakdown in "Metroid other M".

Brilliant article, I hope this gets some nasty commenters eating their words about this controversial Other M scene.

You can't portray someone as an all out badass and then in one game turn them into an overly emotional train wreck.

Who is to say that she wasn't an emotional wreck prior to this game? They may not have showed signs of it during older games because most of them were pretty void of any hard back round story for Samus other than "Bounty Hunter. Metroids. Mother Brain. Pew Pew Pew."

As I've said in my comment further down, Other M is a prequel to the Prime Series (and more), and is set just after Super Metroid.

It IS possible that Samus has learned to control/conquer her feelings/fears by the Prime games.

I would imagine that her reaction is kind of similar to the likes of Michael Myers sister in the Halloween movies. She 'kills' him, and the next time she sees him, she is frozen with fear. Every other time she sees him after that, she's like 'Oh, here we go again'! lol

What other reason could there be?

She's still portrayed as an all-out badass. Just look at what she does in the game.

They are just using words now to explain the character. And to be honest, it's been this way, even within the game. Samus shows her emotional immaturity all the way back in Return of Samus. She can't bring herself to finish the job, leaves one baby Metroid alive, illegally transports it back to the Galactic Federation, and what happens? Comes back to bite her.

That's followed up by Super, when the baby Metroid is kidnapped. What does Samus do? She makes a rash decision and follows Ridley directly to Zebes, where she finds a much more dire situation than she anticipated. As a result, she has her ass handed to her by both the hatchling and Mother Brain.

Samus is indeed a badass. But she isn't invincible. And she has more emotional baggage that would take waaaaaaaay longer to get into (think if you were someone who lived your life all alone taking suicide missions). For some reason, people don't want to see that portrayed.

Did you even read the article??? PSTD
I have a friend who works for San Diego County as part of the mental health team. He works with survivors of torture refugees and soldiers coming back from service. From what my buddy says, the game is pretty accurate in it's depiction of a case of PTSD.

You know, I'm not the biggest Metroid fan but this actually made me want to play Other M.

Remember? It's been called ignorant and disrespectful to voice and think such things. Therefore, the people that thought that way before will continue to ignorantly believe that.

Great and insightful article - journalism at its finest

Somewhat overanalytical, but I fully agree that the soldiers who have been scarred by battle deserve more respect and attention. Very good interview, as well, though.

Great article. Thanks for the insight.

I want to play this so bad and see what it is so wrong with it myself. I just can't trust anything I read because when you're a fanatic you're going to defend it to death even if you're wrong.

After playing FFXIII I was hugely disappointed but you can still see people around N4G saying that the game's awesome or that it is the best FF game ever and even articles defending the game. FFXIII for me was a POS. It seems I have very particular opinions...

Everybody has particular opinions. I think it's key to keep and open mind and find writers you generally trust to read.

I think it's called difference of opinions. Not everyone in the world thinks alike, that is what makes each and every person unique. We don't have a hive mind. Conversely I am playing FF13 and I think it a better game than many I have played this gen, especially the production values. Although it didn't live up to the hype, I don't think it was the the developers fault. I think people just expect too much these days of games. It's clear they worked hard on the game.

Sorry to be so off topic.

are the children that never played any of them before XIII, and the XBFanboys that are so happy to have been able to play it after it was taken from Sony and dumbed down.

Seems like you oversimplified the argument on the other side. Most of what I've seen is people who hate this characterization of Samus because it goes against everything that was established in previous games and not because they don't believe PTSD was a plausible response to having your family killed or that the PTSD response in Other M was inaccurate.

Most of the people that have a problem with this game, in terms of the inclusion of this more complicated subject matter, really just want to blow shit up and not think about the repercussions. They just want to see someone as a uncompromising badass that has no real feelings or problems, beyond where to get the next clip of ammo for their gun.

That's the root of the problem here.

I'm more concerned about this article containing spoilers about the game's plot than if the scene is viewed controversial. Some people (like me, damn Gamefly) have yet to play it and thus, could view this as a major spoiler.

Now I'm VERY curious as to what happens, but I'm going to avoid reading this article as I don't want to be spoiled.

PTSD is a very real issue, too, that affects so many soldiers, even those you'd never think it affects. This game is supposed to be more story driven and very dark, so I wouldn't be surprised to see them try this to put some spin on a famous character. As long as it wasn't put in there for the sake of putting it in there, then yeah, all is good.

But anyone could figure out this much.
The Ridley in this game is like identical to the one who KILLED her parents.
Its not some alternate version of Ridley(I.E. Mecha ridley), its basically THE ridley.

It would have been more suited for Zero-mission ofcourse, but its no way not understandable.

That was actually really interesting.

I see many people complaining about the fact that Samus didn't have a reaction like that in any of the Prime series etc.

What people may fail to realise is that Other M is a PREQUEL to the Prime series, and it is entirely possible that Samus has learned to conquer her fears and demons by that time.

And yes, I found it a very interesting article. It's great when you get articles like this on gaming sites that break from the 'Sony vs MS' etc norm.

I actually thought Prime happened between Metroid and Metroid two, hence the abundance of metroids.

Sorry - my mistake. Got confused between Prime and Fusion for a second. Serves me right for recently replaying Fusion on the GBA, lol.

"What people may fail to realise [sic] is that Other M is a PREQUEL to the Prime series, and it is entirely possible that Samus has learned to conquer her fears and demons by that time."

Umm...the Prime series is set between the first Metroid game and Metroid 2

This game is set after Super Metroid.

A simple look up through Google tells us this...several times.

Great great article. If you've read the manga, which everybody who plans to play Other M should, you'd know that Ridley is the personification of everything Samus has to fear. Ridley murdered Samus' parents (and destroys her planet) and gloats about it to her. He also killed Grey Voice, who had become like Samus' new father. He's destroyed everything she ever held dear. She has been able to face him before, but as seen in the manga, sometimes she snaps. The memories rush back and she feels the terror of a three-year-old watching her mother be viciously killed all over again. Considering that she thought Ridley was gone- just a bad memory- and that this new Ridley looks just like the one that had tormented her all her life... Everything bad that she thought was behind her is back, standing right in front of her. Is it so ridiculous that she freezes?

If you think it is, then you just plain don't know the human mind.

It should also be mentioned that if the Prime games contradict Other M (although I don't think they do, really), it's the Prime games that are wrong. Other M is Sakamoto's. He is the final say on Metroid. It's his. Prime was done by Texan developer Retro Studios. If their Samus is different from Sakamoto's, I'm sorry but it's them who screwed up. Again, though, I really don't think they necessarily conflict with eachother.

I've been meaning to read the manga... know where I could buy/download/view it???

Also, finally an article written by someone who actually did some research!

Here's the fan translation. It was never brought stateside so it's the best there is.

Thank you so much! Bubbles for you sir!

Yes. Basically, she has flaws, so extreme feminists assume that they are trying to say that she has these flaws because she's a woman, which is untrue. She has flaws because she has a traumatic childhood and permanent emotional scarring caused by Ridley's recurring torment.

Now, seriously, anyone who played the game knows that Samus is not "weak", that the game is not "sexist" and that she is still a badass through the whole game. What I don't get is that the interviewer went on to a real PTSD soldier to prove wrong a bunch of stupid Youtube comments.