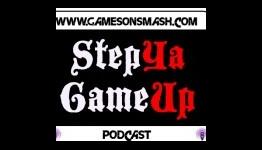 Step Ya Game Up - Podcast Episode 75

Jerrett Calloway (Blade206), Charles King (DCI)
and Wynton Harris (WorseCase) come together once again to bring you guys the most entertaining podcast on the net.

In today’s episode, we talk about the following:
- Update on the rumors on Sony PlayStation phone
- Madden 11 Same old stuff
- Batman: Arkham City talk
- Would you buy NBA Elite with NBA Jam over NBA 2k11?
- Killzone 3 Beta talk
- Call Of Duty Black Ops talk
- Downloadable Characters a week after the game release a big rip off
- Sony Releases PS3 In Brazil and it’s pretty costly
- Halo talk
- Who would win in sales, Halo Reach or Call Of Duty Black Ops
- As always we have a Step Ya Game Up and much much more

The most entertaining podcast on the net

I postponed my iPhone 4 purchase until I find out if this whole PSPhone thing is real. Do want!