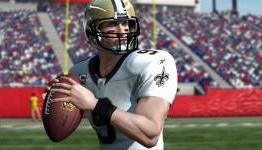 It's that time of the year again. Time for American Football fans to upgrade their cable, purchase overpriced replica jerseys, stock their freezers full of chicken wings, purchase season tickets, and of course purchase the new edition of Madden. Luckily this year's version is an actual improvement over the previous next-generation installments, so spending $59.99 won't make you want to strangle Madden himself.

Adhttps://store.steampowered.com/app/1488200/Symphony_of_War_The_Nephilim_Saga/?utm_source=n4g&utm_medium=native&utm_campaign=sow_n4g_native&utm_content=png
- Comments (15)+ Comments (15)
TopNewestOldest
Expand all
The story is too old to be commented.
4563d ago

Way to break the embargo date. You may have given Madden a nice score, but I don't think EA will be too appreciative, especially considering you probably didn't get a review copy - which would explain why you don't know when the embargo lifts - and instead just got an early copy through a retailer that started selling too early.

I amn't American but I gave the demo a shot. I stopped playing very quickly when I realised the game plays itself for the most part, nearly everything is handled by the computer...

You did break the embargo date and the game is not that great. This is the 1st year NCAA beats Madden. The demo alone got mediocre reviews. Everyone is entitled to their own opinion, but it didn't impress me. The new kicking feature is awful too.

lot of other things suk in madden 11 too

I'm not too happy with the new Madden, but NCAA 11 is one of the worst games I've ever played. It is fundamentally and technically a broken video game. It seems to have regressed tenfold from last year and even, in my view, worst than Madden 10 (which I truly hated). Madden 11 does a lot more things right than NCAA 11 or Madden 10... that being said, it still is pretty broken, but to a lesser degree.

We won't see any fixes in the basic issues that have plagued Madden since '05--such as random speed bursts (irrelevant of stats), non-physical matter (players and football), terrible AI blocking and safety play, etc--until next generation. And even then, the only way that will happen is if the rebuild their engine completely from scratch... otherwise, the same bullsh*t problems will exist.

You complain but show no reasons why you HATE EVERYTHING. You come off as a complainer, because there's no points to your argument. You said it's fundamentally and technically broken...wtf are you referring to? Did you play NCAA 10? It's nothing like that. Players actually block their assigned players or guy nearest to the ball. Receievers don't run routes out of bounds any longer and big backs actually break tackles from smaller DB's. How is that fundamentally broken? You can even release the pass once you're wrapped up in the pocket. You call bullshit at NCAA and MADDEN problems, but give no idea what the hell you're talking about. Please STFU if you have nothing better to say

First, calm the fuck down. The problems with NCAA 10 are so vast it's ridiculous... However, I will enlighten you and list just some (and the list is STILL long):

First, stats literally mean nothing. A star WR will drop wide open deep balls while, conversely, a no name low-rated DB will do some amazing interception. This happens on all difficulties, it happens often, and it makes no sense. Also, along the same lines of stats being meaningless (and part of the game being broken)... if a star WR has a CB beat by two or three yds on a slant pattern--for example--more often than not the CB will defy physics and literally fly across the field to break up the play.

The "hit stick" is virtually worthless, as even with a star LB it usually just pushes them laterally and they still keep running. Sure, occasionally it does work, but it's not the norm.

Safety speeds are nonexistent. Despite how beat a DB will be, some no name S can hawk down a star (or any) WR from the opposite side of the field, for the most part.

The ball still fazes through people. It happens so often it makes the game horrible. And then, almost humorously, the ball still gets locked into cheap animations--meaning it will defy the laws of physics, fly around a WR who is clearly in the trajectory of the ball, and amazingly wind up in the defenses' hands. It's like they have the Force from Star Wars and can control the football in mid-flight. It's broken. People still faze through each other all the time as well, it's ridiculous how everyone is made of non-physical matter in NCAA!

My last major issue with the game is my biggest gripe. Despite how much you know football, understand coverages, offensive packages, etc... it's meaningless. I can call the perfect play against the defense and execute if perfectly--only to be screwed over because the game is based on random, overused, "big plays". And by "big plays" I mean turnovers in key situations... and these turnovers 90% of the time make no sense. They ruin the game.

Just one of the many, many examples of the above problem I talked about: I'm playing against a friend, not online. He throws an interception to my CB whom cheaply flew across the screen to pick it.... so he's running down the sideline in the opposite direction (like 90 yds about to score a TB) and he gets tackled on their 2yd line and fumbles the ball. They recover it with 2 mins left in the game--it's a tie game. The very next play he throws a fly route against my star DB--who, for some reason runs in a circle and lets the WR run by him--and his WR gets a 98 yd TD. Then, following the kickoff, on 2nd down I pass it--his LB breaks on the ball late and uses the Force in intercept the pass (we measured, the ball was two yards away from him when it magically flew into his Jedi hands)... then his LB trips and somehow fumbles it, I recover. Then, the next play his nose tackle fazes through my center, hits my QB before he can take two steps in a three step drop, and forces a fumble--he recovers it. So, he stars running the clock out with 30seconds left in the game. On the last play of the game his HB fumbles the ball and my left DE picks up and takes it to the house with no time left. THE GAME IS BROKEN!! It comes down to the AI, random nonsensical big turnover, and zero skill at all.

Everything I listed above is factual and anyone who's played Madden knows all these things exist. It's not a football simulation, it's an arcade game. Deal with it.

I actually really liked the demo. I would get it if there wasn't going to be a better one next year.

they played the coaches challenges on ps3's and gave the crowd the ps3 version of madden for free..also the ps3 exclusive madden bundle helps as well...

I have purchased Madden every year since the early PC days, when it ran on 56K online fine.
Based upon both the 360 and PS3 demos I played. I totally disagree with the score in this review.
from the demos 8.5 max and thats assuming the CoOP online play which is the main feature I want to use this year

A look at Presidents and candidates in video games

Dwayne Johnson Solid as a Rock on Madden

Video Game Online Passes Suck And We'll Tell You Why