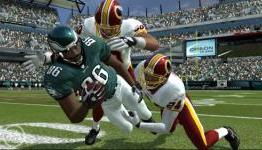 A new lawsuit against EA contends that the publisher “knowingly and intentionally” used NFL players’ likenesses in such a way that they would avoid having to pay licensing fees. Plaintiff Tony Davis, a former NFL running back, believes that EA misappropriated the retired players by using stats and positions, without using the names and uniform numbers of specific players. This matters little, as the game allows players to manually change the names of these “historic players.”

Adhttps://store.steampowered.com/app/1488200/Symphony_of_War_The_Nephilim_Saga/?utm_source=n4g&utm_medium=native&utm_campaign=sow_n4g_native&utm_content=png
- Comments (0)+ Comments (0)
TopNewestOldest
The story is too old to be commented.
60°3

Electronic Arts says "games are the social networks of the future"