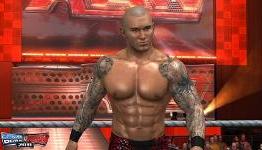 edit-october 29th, so close. i can usually set my watch by the release dates of games like this.

Is that each year, they take out at least one great feature from before, then add it in next year like it's something new and exciting.

They can go fuck themselves, the last truly great WWE game was Here Comes The Pain.

they are about the same every year...last one was the worst one yet. It started to go down hill since they took out gm mode and 06 was good but 07 Gm mode was alright on up, terrible.

The last svr game I bought was 2006. Its been 5 years since I bought a svr game.. Its the same shit year after year..

Those are the best wwe games.

I agree with your list as I own every popular wrestling game available, but I would totally add 2010 to there. The created wrestler share feature adds so much since you dont ever have to be the same wrestler twice and the gameplay is finally rock solid.
Not to mention 2010 has the best Royal Rumble mode ever created in a game.

IMO 2011 will be one of the best wwe games ever with the improved weapon physics and everything as long as they dont remove the wrestler share or mess with the gameplay too much.

i'lld gt wcw on 8bit over this crappy game

I have always enjoyed the series especially now that trophies are added.

I just think if you aren't a wrestling fan, you shouldn't bother playing the games. If you are a true wrestling fan, all this stuff you guys are talking about wouldn't matter.

The guys that make these games take lots of feedback from the community so it makes me wonder why people that keep talking about games from 3 or more years ago think they know what's best for the genre.

I've been running eFeds for a long time using the series and nobody really had a problem with them. We told them what we didn't like and they fixed it. As a matter of fact, there's 4 different WWE titles coming out because so many people have different opinions on these games should be.

I find it funny that you expect the games to change dramatically when the WWE product itself has stagnated in originality for many years now.

Your so died on I loved Here Comes The Pain with brock lesner in the cover.I had so many great memories playing that game with my friends all baked lol.But after that it all went down hill I didn't like the first raw vs smackdown.

So someone please correct me if I'm wrong, since it's been a couple of years since I've played a SvsR game. But I love if they included finisher set ups! Like when Randy Orton coils up and sets up for his RKO! That would be amazing!

WWE Smackdown vs Raw: A Retrospective