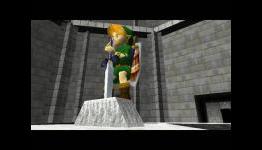 Why Ocarina of Time Isn't The Best Zelda Ever

The title alone of this article may bring a big red alarm shining over the world of gaming. Ocarina of Time isn't the best Zelda ever? It's not the best game ever? What is this blasphemy from a Zelda fan site? On top of that, there is going to be commentators that wont even bother reading the context of this article. Zelda fans are extremely passionate, and in that fandom, Ocarina of Time fans are out for the blood of human sacrifice to prevent anyone from speaking against the gaming giant.

people think it was out of nostalga.

for me OoT is one of the best zelda ..but that doesn't mean i didn't enjoy the others more polished zelda afterwards

Ocarina of Time was leaps and bounds ahead of any other game technically for it's time. Which is one of the reasons people have such grand memories of it. It was felt like the first true Open 3d World experience with almost every single environment rendered with beautiful real time 3D.

Personally and this is just a personal preference I think the best Zelda is A Link to the Past.

If you go back now and play the N64 Zelda games they don't hold up to well both in visuals and in some of the clunky controls of the time. Despite being really good games they kinda need a remake.

But if you plug in your SNES and go play A Link to the Past it's still incredible. For as old as it is it looks incredible and the game play is timeless in my opinion. I have gone back and revisited A Link to the Past probably twice as much as the N64 games and it's primarily because I don't get pulled out of the experience as easy.

As I said it's just personal preference on my part but it's really kinda hard to pick a best Zelda anyway. They all have their charms I think.

Personally, I PREFER Windwaker, Majora's Mask, Link to the Past, and the handheld Zeldas (Phantom Hourglass, Minish Cap).

But with that said, I'm still stoked to play OoT remade on the 3DS. Most every Zelda game is amazing.

Just like most people think FFVII was the best.

When I think of a "Zelda" game, I always think of A Link to the Past, and it is by far my favorite one.

Then again, I'm not sure it matters because there is no such thing as a bad Zelda game. (except maybe the ones for the CDi, they are some of the worst games ever made, but they don't count as part of the Zelda series)

I've only cared about 2 Zelda games... The original NES version and OoT! All of the others were just filler games.

But that's just my opinion!

i disagree with your statement that Majora's mask is better than Ocarina of Time, but I think you argue your point pretty well. There will be differences of opinions on favorite games, especially since Ocarina of Time is widely considered the best game of ALL TIME. So i'd imagine that people can and will disagree with that opinion.
However, the evolution of gaming can be seen in OoT, and thats usually why its considered a legend of gaming.
keep up the good work btw
-Ray

WInd Waker is better than OoT and MM. That includes the GameCube collectors versions of those games, which I played over again when I scored the collector's copy of WW.

WW is the best Zelda to date. Only nostalgia keeps OoT above it in the "top N of all time" lists. And OoT is not the best game of all time. Man I don't know why anyone thinks that. Almost every Mario game ever made have been better than the Zelda games of the same time period.

I don't know if it's "THE BEST ZELDA EVUR" but it sure it my favorite one so far.

Also, I don't understand the "RPG" part... I know The Legend of Zelda has RPG elements, but most are non-traditional.

the legend of zelda : [insert subtitle here] is the best,
flame flame flame

What if i said [insert subtitle here] was the best huh? Then what?

all were piece of cake compared to zelda 2 link's adventure.. to this date i haven't beat it yet.. years pass, i play it again and i get a little further tough.. some day.. some day..

Oh noes, my opinions are much better than urz.!!

Yeah, its sucks for sure. (Sarcasm) Is only 5th in the Guiness Book of World Records for top selling game. I don't think it took that title for no reason. I think this article needs a wake up.

How Dare them say that in the title of this article!

Link to the past was my personal favorite.

Right on. Definitely the best IMO.

OoT is my personal favorite

My personal favourite is A Link to the Past, closely followed by Ocarina of Time.

My favorite is between Majora's Mask and Wind Waker.

Personally I liked OoT more than the rest (I still play it every now and then today) but, I can see your point in this article. I just wasn't fond of Majora's Mask because of the constant switching between days in the plot. At first it was cool but after so long, it grew annoying. I know some would disagree but, that's just my opinion.
Nostalgia does make me respect it though, the fact that it was the beginning of a lot of things, good to think back to when my brother got it when we were kids and we sat up all day playing it. It's like the Final Fantasy VII thing. It's thought to be the best RPG (for some, game) ever and, though I don't completely disagree, a lot of gamers who can't let that go because of the nostalgic feel you get from it. But like you said, it's all subjective and based on opinions.

Who cares? This is merely opinion. OOT is still a bitching game and is one of the most remembered. A Link to the Past is my personal favorite but each to their own.

OoT is my favorite

everyone is entitled to own opinion. For me I'd say Wind Waker or A link to the past. I loved Oracle of seasons and ages though.

That's an easy one: because it's not [insert preferred Zelda title here].

Skyward Sword is my favourite so far.

Except for the fact that it's not out yet.

I perfer Ocarina of Time and Majoras mask way better than Wind Waker.

link to the past was a perfect game period, let alone perfect zelda game. everything since has been a pale imitation.

But Link to the Past is the best Zelda yet! Best YET!

Til Skyward Sword but who knows.

While Ocarina of Time will always have a place in my heart as being a revolutionary step in the Zelda franchise, I have to give the title of "best Zelda game" to Majora's Mask. The story was perhaps the most unique, and all the NPCs had a personality and an agenda, which made them feel more like real people, rather than just bits of data. As a result, the world of Termina just left a much bigger impact on me.

Ocarina of Time is the best Zelda ever imo. And not because of nostalgia. I played MM when that came out, and I never played it after I finished it. OOT I must've played well over 5 times.
A Link to the Past is my 2nd favourite, then closely followed by Wind Waker.

OOT is hands down the best Zelda ever. Get over tryna be "cool" because you're choosin' a diff Zelda game. Doesn't make you "scene". Now stfu.

OOT is nothing but a reflection of that.

I completely agree...but at the same time you are neglecting the fact it was a very polished 3D conversion.

I was just playing the rom, no lie. I remembered the shadow temple being scarier as a kid though.

This conversation is retarded. They're all the best. GTFO

It's my number one game ever made. :)

On a serious note. I think Ocarina of Time is the greatest Zelda game. It's one of the only games I actually felt emotionally attached to. So much fond memories of missions i did within it.

The Fact that the Nintendo 3DS is making a version of it. Has already sold with me i'll be buying the 3ds an the ocarina of time. lets not forget star fox an so on.

OOT come in second then WW.

OOT is an amazing Game, But lets be honest, its really an updated Link to the Past.

I feel like MM they actually tried some different things, there wasn't "lest do half the game in Light Side, and the other half Dark Side" (please stop doing this!)

MM had a cool time concept, the mask concept was awesome! and being able to morph into different characters was awesome.

WindWaker, started off cool, but the game failed to evolve, and they made that game painfully easy, and if you spent more then 2 seconds trying to figure something out, your fairy would yell at you, telling you the answer....

and twilight princess, was an updated OOT, better graphics, but not really taking any risks...

and it doesn't look like skyward sword is either, people are just caught up on the controller.

For most gamers OOT was their first zelda game...Which is a shame cause i believe Link to the past should be recognized as OOT is. Followed by Links Awakening...damn that ending got to me xD.

MM had something special though for a 3D zelda...It was such a depressing game...but in a good way? xD I dont think i can explain this one.

Windwaker was the best 3D zelda imo. The whole mood, feel of it; awesome.
All time favorite 3D Zelda game.

I say wind waker is the best,because it borrows from all the best Zeldas and pulls it together perfectly. The story,the dungeons, the vast worlds and open ended exploration. Wind Waker will always be my Fave and the best in my book.

And yea OOT was scarier when I was a child.The Redead use to freak me out

A link to past is better than OoT or MM imo.

'The Legend of Zelda: A Link to the Past': The Quintessential Zelda Game