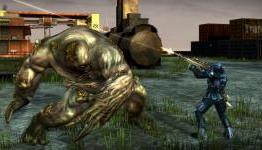 Crackdown 2 is due to release in North America tomorrow, and reviews are beginning to trickle in. Earlier today, we posted our full review for the title, and it's a solid, fun game, but it may not offer the evolution people hope for. It has been said Crackdown 2 was in development for 8 months, but earlier today, a Ruffian dev gave a more precise answer for the production time for the title.

Adhttps://www.youtube.com/watch?v=EjfojxXOobE&t=463s
- Comments (38)+ Comments (38)
TopNewestOldest
Expand all
The story is too old to be commented.

Never seen a game get this much hate even though it's gotten decent scores across the board. The mongrels are raging.

1 year isnt enough seriously. look at the graphics. They coulda been better if they had used a better engine and more dev time.

It's good to see they took some time with this one. From the first reviews it seems like a pretty good game.

What, do you consider a 71/100 review bad? Because if so, you're the exact type of asshole that makes reviews so controversial.

graphics whores will be the death of the industry.

Gamers who accept any crap the industry churns out at them will be the death of the industry.

It's not graphics that make Crackdown 2 a bad game.

Edit whoops, meant that to be a reply on dizzle, sorry Wave.

no more MW2's please thank you!

You are the reason developers can crap out half finished and uninspired games and sell them for full price of $60. YOU are the death of this industry.

If graphics don't matter to you then why did you upgrade to new generation systems? The only point of doing so is for better graphics (mainly). If people didn't care about graphics we might as well still be playing on the NES.

Got it on from Dell for $39.99. For me personally $29.99 would have been the better price but my son wants it and I'm a push over. It isn't graphic whores that are hurting the industry. It's developers putting very little effort into games and releasing them for full MSRP.

Crackdown 2 looks and feels like DLC of a 3+ year old game. Assassin's Creed II, RDR, Infamous and soon to be released AC Brotherhood and later Infamous 2 prove you can have the best of all worlds when you have developers that give a shit and are not rushed. I think Crackdown 2 would have been better served as an XBLA game or it should have retailed at $39.99. Maybe that way I could have got lucky and picked it up for $29.99.

Wow imagine if naughty dog would have done the same with uncharted 2 that already gives me a nightmare.

It would still be a good looking game I mean just take a look to uncharted 1, gorgeous game.

What if U2 was basically the same as the 1st but thegfx were worse to boot. Would have scored simiar as CD2. Full retail games should take close to 2yrs for a polished sequel with added content. L4D2 and CD2 are examples of rushed products. I find it hard to believe another yr dev time would not have beneficial. Look at KZ3 and Infamous 2. Sequels with proper dev time with marked improvements. We should all demand this.

1 year? they deserves the low scores...

KZ2 and U2 full production period were only 18 months. If you go find their power point slide they made for GDC online you will see that.

KZ2 was only 18months? srry can't believe you

"Jan then gave a outline of the Killzone 2 production. The project was completed in 18 months of full production with 140 people at Guerrilla Games along with an additional 50 borrowed from the Sony staff."

...but this is Ruffian’s first game, right? Both Gurilla games and Naughty Dog are well established, and they have their shit down. But then again... they’re both just great developers, and great developers make great games. I guess Ruffian was either A) on a time crunch or B) just aren’t very good.

An engine and a game are not created in 18 months, no matter how big the team is, especially with a game like Killzone 2. They were talking development since 2007. And were confirmed to be working on it back in 2006. So no, even I find it hard to believe that KZ2 was created from the ground up in 18 months. That would be the fastest time for a major game to be created along with an engine in the history of video games.

I guess Crackdown 2 is just a bit underdone... but really, haven’t game companies learned that short dev time= worse scores= generally worse selling game? Just a few more months, and a better direction, and the game could have been fantastic (according to reviews, anyway.)

I only paid $25 for it, so if it doesn't entertain me I'll just trade it toward something else. I guess I'll see when it gets here.

I'm looking at it from the perspective that the first one wasn't exactly strong on story, but the orb hunting was a blast. So if it retains the gameplay elements that I liked I'll be happy. If not, it'll get me $30-$35 in trade-in credit for the first couple of weeks and I'll find something that I like more.

the only difference is the buildings look destroyed.
The life orbs and everything else is almost in the exact same spots as the first game. The only differences is the zombie enmeies and 4 player coop instead of 2. If u havent played borderlands and get this game then you are a disgrace to gamers every where.

There is nothing in crackdown 2 thats at the lvl of your characters. this means u basically are god mode 24/7 with no fear of death. Anyone ppaying 60 bucks for this game is a failure.

crackdown 2 is basically like if you were playing crack down 1 and almost beat the game but your system rrod and u lost your save so u have to start over from the begining and then u noticed u could change the color palette. Its basically that and no halo 3 beta this time.

it has nothing to do with development time.

the 360 cannot produce any better than a crackdown looking game for a crackdown style of play (open world, mass physics calculations, intense and fast charachter movement when large portions of the map must be rendered at once)

hardware is fine. it is still powerful enough. the hardware doesn't matter as much as you think it does. it is up to the developers. it is all in how efficient you code the game.

they rushed production of the sequel, a year is the kind of time it takes to produce those god awful movie tie ins, the only reason crackdown 2 is any good is because they reused most of the original crackdown in making it.
i doubt there's anything in crackdown 2 that couldn't have been done as a dlc pack for the original.
modify a few landmarks to made them look destroyed, remove all the gangs and replace them with either mutants, kinda like zombies because there are way too few games with zombies nowdays, or cell, yep, just one gang now.
and a few missions, that on the evidence of the demo, seem totally unbalanced for a single player.
i bet saints row 3 will look significantly better than saints row 2, and i'm not just talking graphics, because they will put the time in to make a true sequel and not dlc sold as a full game

Looking Back to 2010 with Crackdown 2 - Agent of Mayhem

Crackdown 1 & 2 Are Currently Free on Xbox One

Crackdown 2 For Xbox One Is Available Now For Free, Here's How To Download It

Crackdown 2 coming to Xbox One Backward Compatibility for free