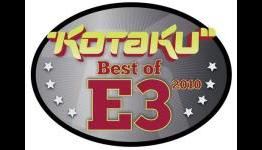 What were our favorite games of E3 this year? Let's take a look!

Don't quite see your point. Considering that they thought it was better than portal 2 which is also on the 360.

I think that IS exactly the problem. For Kotaku Dance Central > Portal 2.

You realize there is a whole subset of culture that loves to dance? Typical gamers don't care about it but people open to other things than the obvious RPG or FPS.

Yeah it's called clubbing not breaking shit in your house result of dance central lmao.

seriously, this time Kotaku touched new and unprecedented lows. They're the ultimate shame to gaming "journalism".

Maybe indipendented blogs are a good thing since the so called "professional" journalists pull out this kind of sold-out crap.

Jesus, what a joke that site really is.

That will be the last time i visit that site.

I am sure you will be missed.

Was it any doubt..... Kotaku has always been pro xbox.

This isn't just pro-Xbox, this is pro-BS. I have no clue why they'd give out most of these awards. Heck, Kirby gets stuck with best character design! Why? He's Kirby, but he's made out of yarn! What about the environment or game mechanics? You know, the things that are actually good about that game?

You guys have every site punked but maybe Kotaku. If these games are so damn great for PS3,tell a friend to buy that BS so said overrated game can sell 2 or 3 million in a month (NPD).

Then you loud mouth sob's would have a friggin leg to stand on when you guys talk all that ****!

Are you seriously standing up to defend these awards? Like, the ones that are actually on the page? If you're an X360 fan, you should be as concerned as anyone else about this, if not more so. A casual game just got marked as the best thing on your system at E3. I'm more flustered about the whole thing, best award aside.

I'm not saying this is too Xboxy. I'm saying that if they wanted to give a Best of E3 award to an Xbox title, it should have been something at the conference that we saw before Kinect came on stage. I felt like Kotaku was trolling.

BTW, Nintendo had the best showing at E3. NPD that.

If the best 360 game is dance central than I really feel sorry for people who own a 360.

That's a pretty short bus kinda list. Wtf Crecente, did all the developers with legit AAA games blacklist you too?

Wow. The value of their Best of E3 award just dropped significantly. That's pretty awful. I'm not too keen on Xbox, but I'd understand if it was another 360 game, sure - I'd be fine if one outlet gave Gears 3 the award, but Dance Central?

Child of Eden is completely ignored. And what the heck is this God-awful commercial for some six-string gimmick?

At least they gave props to Okamiden...?

I saw the Child Of Eden trailer. Looked like the only thing that could possibly make Kinect appealing to me.

Well, the great thing about COE is you don't need to use motion control! You can use a regular controller and go all out Rez-style. Mielke made that clear in a later interview.

lol.. dance central, they must of gave them free glow stix to dance with

Forspoken’s Ending Explained and What the Future Could Bring