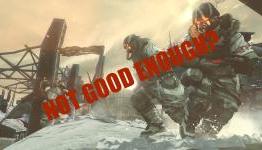 Mucu from GamesOnSmash.com writes, "This morning I was greeted to the prestigious Game Critics Awards Best of E3 List. I always enjoy looking at it because it details what 31 top-notch media sources have deemed to be the best of the best. I personally agree with a good amount of the choices because I was able to get hands on with 90% of them, but there is one glaring omission from the list. Where is Killzone 3?

Adhttps://store.steampowered.com/app/1488200/Symphony_of_War_The_Nephilim_Saga/?utm_source=n4g&utm_medium=native&utm_campaign=sow_n4g_native&utm_content=png
- Comments (67)+ Comments (67)
TopNewestOldest
Expand all
The story is too old to be commented.
Spaghett4607d ago

This is almost as news-worthy as people bitching about how IGN or Gamespot didn't give some PS3 exclusive a perfect 10 (just higher than a 9 - sacrilege!). It's a matter of opinion, and just because they left it out doesn't mean it's "not good enough". People have different tastes - live with it. Killzone 2 didn't get many game of the year awards but since Uncharted 2 did, it's still counted as a "win" for the PS3 fanbase.

You know what the two "events" have in common? They're ultimately pointless in proving a game - any game's - quality.

@Mucudadada: That's the thing - who is everyone? I highly doubt that every one who went to E3 declared that Killzone 3 was more fun than any of the other nominated games. It's impossible to just go up to every one attendee anyway and measure their response. At best they'll tell you a handful of games but I am yet to see any one state flatout that they loved it more than anything else they played.

As for it not being nominated, as I stated, it's an issue of taste. Leaving aside Uncharted 2, if Killzone 2 didn't get any awards, would that be indicative of the game's quality? Several units sold and great reviews later, besides actual customers stating their satisfaction with the game (and all this positive response being enough to warrant a sequel), does it matter if it didn't recieve some award or the other?

It's the same case here, only much less significant. Remember when Splinter Cell Conviction got a "Best of E3" award (don't remember from where)? Did that have any significant impact on the game's sales or reviews? Did any one look back at that and say, "That award influenced my review or buying decision"?

It has nothing to do with PS3 exclusivity. It is simply raising the question as to why it missed the list, when it seemed like everyone loved it when they played it. More so than some of the other nominated games.

@Nike - Yes, you are correct. Not everyone deemed it better, but I just wanted to make sure that people knew that the game is still shaping up to be a good game. And, it is strange that it did not get on the list even though many of the sites in the 31 gave it awards. It's just strange. That is all I'm pointing out. If you read the article I also talk about how personal opinion is still vital for this very reason.

Hell, it's better than an article titled, "KILLZONE 3 SUX - NOT ON BEST OF E3 LIST!"

The way I look at it, Killzone 3 is on a whole different playing field in terms of marketing, gameplay, awareness, etc. That is, it's not a franchise that's been uber-hyped like Gears or Halo. I chalk that down to Sony's overall marketing strategy but I do believe Killzone 3 is getting more attention for the innovations it's trying to bring forth like 3D, Move support and all the new gameplay features.

It'd be great if on the mother of all video game shows that Killzone 3 hogged the spotlight - but simply because of the presence of other big names, it's automatically going to get downplayed. While strange that it wasn't at least nominated, it's only one organization. So while personal opinion is important, they've got their differing opinion. "Killzone 3 Worst of E3" would have been flamebait, pure and simple, but as long as whoever writes it puts forth a clear and concise (and believable opinion), we have to take it. Simply because he's entitled to his opinion as much as we're entitled to ours.

(Reported "Lame" just because I disagree with the piece's newsworthiness - just my opinion, so please don't take it like I hate the story and want it to fail...not like that report makes a difference :P)

Nike I think you need a break from N4G, immediately.

enjoy getting trolled and give them hits.

Killzone 3 won the best shooter in gamespot and best 3d game in gametrailers.

I had never ever ever heard of any of those sites until visiting N4G. And I believe they have little to no people following them outside the site as well.

@Timberland2K9: Damn boy, why so serious? I hate N4G, I admit it, but not just because of the relentless flamebait this site's been getting. It's also because of the lackluster moderation and support. I'm not getting salty for anything - though I can take a page from your book on how to get a restraining order issued against me.

Nothing personal, but you guys are fuc*ing dumb and you obviously hate N4G subconsciously, the reason those sites post on N4G is to spread their audience, hence the purpose of this god da*ned site -- LIVE WITH IT. Stop getting so salty for stupid sh*t.

We don't troll for hits. We try to post stuff on N4G that no other site posts. That's called original content, not trolling.

original content? lolololololol I see the same thing on n4g everyday, crappy articles that have amazing headlines and then once you go to the site its like a 3rd graders book report, copied straight from some other site. Most articles lead you to believe that there is some content waiting for you at the link, but its usually just one paragraph of reading the same thing some other guy posted 3 pages ago, or its negative Playstation 3 FUD, thats not even close to true.

n4g is a great place when used properly but at the moment its just a bunch of 360 fanboy approved articles, despite seemingly more pro-ps3 "commentors". But like many others have said before when there is no positive news about your own console, all thats left to do is rip on the other one for hits.

Isn't this an opinion piece? He's stating why he thinks KZ3 should have made it. Remember when GTA4 got 10s across the board? All those sites hammering on why the THOUGHT it didn't deserve it? Cut it some slack. Geez.

Killzone 3 is to good to be on that list anyway so I could care less.

Do you really tell yourself that or are you joking?

Do I really care what you think ? Hold on let me answer that for you no I don't care.

Is just a list, this won't affect Killzone 3 at all, so it doesn't matter.

Why does this even matter? Just because it's not on a few critics favorite list now doesn't mean it won't be a good game when its out later.

Killzone 3 has nothing new . another generic FPS with space marines

wow, i can see another game that BARELY snuck on that entire list and did so in the best pc game category

You can't please everyone. I like the way that this guy thinks that because he enjoyed it, it should automatically be on the list. That's some ego. I'm not saying it doesn't deserve to be on there but everyone has different opinions, move on.

Why should I care about their opinion (that they are entitled to)?

to be quite honest most fps games at e3 wasn't really impressive, halo reach, cod, killzone 3 didn't show anything new. It was just the same ol stuff.

How the HELL did Dance Central get up there as a nomination for best of show?

Why is this ridiculous game getting so much pub? It's a DANCING game for the love of all that's holy.

No matter how great the game looks, its gotta have a better online and tweaked controls to compete even old games like MAG.

yay the media is what tried bashed badly again in killzone 3 like killzone 2..

must have been all those free 360s's they gave away...

some sites don't agree with you, get over it.

Halo Reach-showed nothing, it basically looked like the multiplayer. Then they showed space combat but that looked cheap.
Killzone 3-while it had alot of action it didn't show great action sequences.
Bulletstorm-showed some really good action sequences but the core gameplay is just too easy.
Crysis 2- Your basically a God
Rage-seemed to be the best. Challenging AI, Cool weapons, and some good sequences.

I honestly thought the best looking shooter was Ghost Recon Future Warfighter. Nevertheless, Killzone 3 should have at least been on that list.

I agree, KZ3 was worth at least mentioning, it was one of the highlights of sony's press conference.

some of you must have forgot that KZ3 is still in pre alpha stages....show me a game that looks that good pre alpa...exactly you can't...Only parts of a level were shown...More of the game shuld be revealed at gamescon or the TGS...KZ3 is a must buy in my book,I love KZ2...and now that they made the controls A LOT more responsive the noobs have nothing to complain about...

what a load of crap

How can you not have killzone 3 on the list it looks crazy good I'm dumbfounded.

kz2 already spit in the face of the haters and looks like kz3 is gonna do the same. who cares if it isn't on this list it will be the best shooter when it comes out.

Who cares if its not on some list? Will that make you not buy the game?

Heavens forbid someone has a different opinion than your own! Who gives a shit anyway, it's some poxy award no one cares about, well apart from this guy obviously.

Are they going to start crying if their favourite game doesn't make it onto a sites GOTY list as well? Some people are such whiny bastards.

Nope, not getting hits from me.

its not on peoples best of show awards lists because there were plenty of better games. Killzone 3 is just Killzone 2 in the snow with a jetpack. Crysis 2 and Rage makes it look ugly and generic.

That is such a fanboyish statement and yet you call yourself 'I Hate You Fanboys'. Don't knock off something you haven't played yet.

What The Hell Happened To Killzone?

Here is Killzone 3 running on the PC via the best Playstation 3 emulator, RPCS3