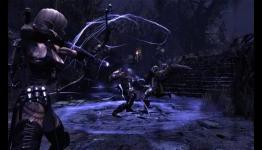 Mucu from GamesOnSmash.com writes, "Cooperative games hold a special place in my heart. There is nothing more thrilling than taking out a legion of foes with a partner at your side. Unfortunately, very few co-op games are worth the time to play. Most of the time, the developer’s construct a single-player experience and then throw in co-op last minute. This simply does not work. The best co-op games are constructed from the very beginning to be played with other people. That is the key that is making Hunted: The Demon’s Forge from inXile Entertainment shape up to be one of the best co-op experience in years."

I love co-op in a game. I love working together with a partner to complete/achieve the objective. Ive put alot of hours into res 5 just playing though the levels over and over with a partner. helping each other out, o sh1t a manji has grabbed him, "better go break his jaw with a roundhouse kick"

They should rename to "Smashed Gamers"

It's one of the best. Single player it was awful, but as a cooperative game I had tons of fun playing it. Of course, the enjoyment of co-op games do rely on how much fun you can have with the person you are with, but overall RE5 did a great job of allowing users to really feel like they were working together.

Haha is that an insult? It's slightly less bad than Resident Evil 5?

I looked into this game. I was really excited since it was a co-op RPG, then I found out it's online co-op only, and that there were only 2 characters, and there was no customization, and it's less than 10 hours long. Now I don't want it.

Sigh...It's games like these that make me want to play MMOs so I don't beat the game in one sitting. Most modern "RPG" devs aren't even trying anymore. They think people want more and more streamlined games when most of them want more and more depth.

I was kind of referring just to 3rd person actions games. But, yes, L4D is brilliant. I just bought the second actually. This game feels a lot like RE, though. So, I thought it would b accurate to kind of tie it into that.

Ha, we'll have to give this a shot, Mucs. I could go for some good co-op action soon.

Heck yes! It's going to be fun for co-op. Not sure about playing alone with AI, but Co-op will be fire.