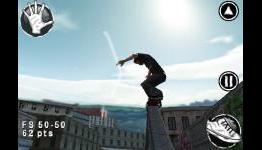 When considering the existing pedigree of the Skate series, there were higher-than-normal expectations for the mobile version. Unfortunately, Skate It could only be considered part of the series as a stranded stepchild. Using the accelerometer to control movement, a push button, grab button and finger motions to perform tricks, the game presents too much to control in comparison to the console version. It has a stunted career mode that focuses on challenges rather than free skating, and graphics that look worse than the original PlayStation One Tony Hawk game. Skate It isn’t Skate, but a quick attempt to cash in on the series without adapting the title properly for mobile users.

The Appera: Skate It Review