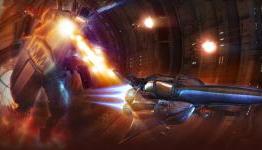 Thunderbolt writes: "If there’s one genre in all of videogaming that is balancing dangerously on the edge of extinction, it’s the side-scrolling shoot-’em-up (affectionately nicknamed industry-wide as ’shmup’). Back in the day (i.e. the 16-bit era), 2D games were the rule, not the exception, so it was a given that certain companies like Konami and Irem would release a shmup or two amidst the slew of more mainstream offerings. Generally challenging and don’t-take-your-eyes-off-the-s creen-for-a-second frenzied, these twitchy, projectile-spraying action-fests have seen their already small niche narrowed significantly in recent console generations, which is why it’s so surprising to see developer SideQuest Studios focus so intensely and specifically on creating shmup titles."