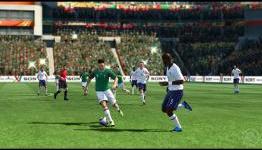 On the evidence of FIFA World Cup 2010 South Africa for PlayStation 3 (reviewed) and Xbox 360, publisher Electronic Arts (EA) has proved that it really cares. Although we all benefit from the gaming giant’s sensitive conscience, what EA cares about is its own reputation.

Adhttps://store.steampowered.com/app/1488200/Symphony_of_War_The_Nephilim_Saga/?utm_source=n4g&utm_medium=native&utm_campaign=sow_n4g_native&utm_content=png
- Comments (0)+ Comments (0)
TopNewestOldest
The story is too old to be commented.
30°1

Will DLC Ever Work For FIFA?