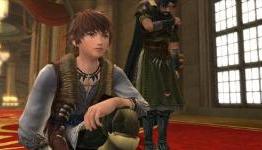 well that would be awesome, sold my copy after finishing twice.

This doesn't make sense. Why and how are they going to do this? Not only would the Trophy List Clash but also the Multiplayer. Not to mention destroy any possibility of a small sales boost toward the original when the sequel is released.

I know they have the space on the Blu-Ray but its still a strange thing to bundle two games together on a disc.

just look at god of colection . the trophies on that collection do not clash.

the small boost would be abysmal , with pretty much everyone interested already owning the first game , or not bothering to buy two games for the sake of understanding a plot .

Instead its rather smart , it ensures newcomers wont be left behind with plot and content from the first game

That answers that. I just kind of feel bad for the people who bought the original. I mean wouldn't you be a bit upset that you spent $60 dollars on a game that will be free when you spend another $60 dollars on the 2nd installment?

That aside I guess me friend will be happy since he passed up the first one when all the low review scores started coming in. He mainly wanted the game for the MP cause it gave off a Monster Hunter vibe.

er actually no , i'm very cool with it , as most current owners .
We'll be ready instead of doing the two games in a row , and there are quite a few freebies that probably wont be there .
Plus it means a back up copy of the game .

cause the first one flopped anyway?
And last time I checked, everyone loves 241 :D

That would be awesome, I still have mine I need to go back and get to level 50. This is the worst time for me to want to go back to that game to...:(

I kinda think Insomniac should do that with Resistance3, but have the other 2 campaigns included with co op..

On the new engine :) (like LBP2 runs LPB levels...just dreaming).

That would be cool for anyone who didn't play the original.

glad I didn't now, I'll wait for this bundle lol

Because #1 only sold a paultry 180K copies and Europe a whopping 40K. In other words, nobody cared enough to buy it so they need to make it a better value or nobody will buy the 2nd one.

you trolls ought to realize once and for all that final fantasy level franchises aside , jrpgs hardly do better most of the time in the west .
The original 500-600k japanese copies made it a big success already , and the rest is icing on the cake

The Japanese numbers are around 350K.

the problem is the game took long to get released in west, and close to games with known names

The story of this game pretty much requires you to have played the first. Even though most of the people who enjoy/ed this game like/d it for the online play.

There are tons of ex WOW and FF11 players making up the community of this game.
Any word on the U.S. release date of this sequel?

This clearly shows the advantage of having blu-ray. Two games on one discg, maybe? And with updated graphics!

It'd be great since i havent played the first. Though people on my friend list wont stop coaxing me to buy the game all ready so they can play with me and screw around online. Guess, i'll keep my eye on this one.

thats awesome. talk about getting your money's worth. hundreds of hours of gaming for $60? yes please.

lol Level 5 is soo retarded for not dropping this series yet. After the first title being so lackluster, why would anyone bother picking this one up? INSTANT failure right here.

They should just go back to making Dark Cloud, like people have been asking them FOREVER, and no it's not just me.

I'd take your opinion seriously, but your Lost Odyssey avatar keeps screaming that I shouldn't.

I loved Lost Odyssey and still don't take his opinion seriously.
I wasn't a big fan of the first WKC but I think the series has a lot of potential so I am looking forward to more news on this new one.

I agree knightdark. They should just drop this series and make Dark Cloud 3 or another Jeanne D'Arc game. I don't see anything good coming from WKC.

Seriously expected much more from the studio behind Dark Cloud.

such a waste of a promising IP..

I bought Lost Odyssey a few days ago, have been playing for 18 hours and I must say must be one of the best RPGs I've played for this generation and perhaps in a long time.

The musical score is awesome (Nobuo Uematsu is amazing), story is very good and engaging. Personally this out shines any of Square-Enix's current games so far.

That's one way of making good use of the blu-ray format if true.

If this is true I would probably buy it

If that's true, I'm buying a copy for sure!

Great deal, still yet to get the first to many great games to get through!!

I'd pick it up if that was the case.

Fans of the game should not be p*ssed well maybe only a little they dropped the ball on the western release so badly their best bet is to relaunch it with the second.

For the good of the franchise it needs to be done, only played about ten hours but enjoyed it very much.

That would be pretty sweet. Think I'll wait and see it this rumor holds weight. I was thinking of getting WKC when the price dropped so if WKC 2 has WKC 1 on the same disk, that's 2 birds with one stone.

For me WKC is a diamond in the rough. The game was extremely flawed but if Level 5 can fix those flaws WKC2 will be an excellent JRPG. The first flaw, which is already being addressed in WKC2, was that the combat should have been much quicker and more action based but instead it was slow as beans. Also its just unacceptable that an enemy could melee attack you from 100 yards away, they should have to actually be standing right next to you to attack you.

The second flaw I think is the story. The story wasn't so bad it was just the way that it was told. WKC has, in my opinion, one of the worst scripts I've ever read in a JRPG. Now the online was fun. No real complaints there.

When I first saw the IGN review score I was shocked but after finishing the game I agreed with it. WKC should have been an 8 or 9 but the dialogue and combat are what held it back in my opinion. I have really high hopes for WKC2 because we already know the combat is being addressed. I just hope and pray that Level 5 hired a new script writer for the game.

I would buy em no sweat. Hope its true.

is this for psp? if yes i can say wow

TOP 10 of the Most Beautiful Places in JRPGs

The ten finest RPGs you can get on your PlayStation 3

Medal of Honor: Warfighter pre-order $12 off at Newegg

Sony tried to bring PlayStation Plus to Xbox, but Microsoft 'will not permit' it