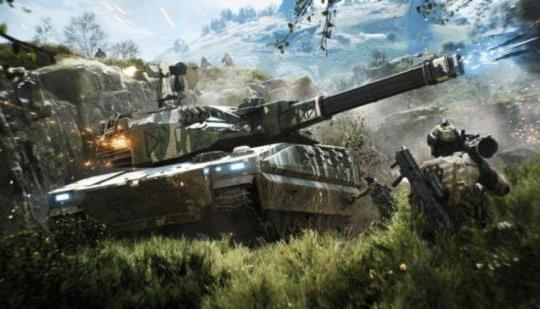 Battlefield 2042: DICE Says They "Shot for the Moon" and Missed, but It Is a "Really Good Game Now"

DICE says they were "shooting for the moon" with Battlefield 2042 and just missed, though they think the shooter is a "good game" now.

"Heroes suck" & that dumb motion sensor ball that pings enemies in X proximity sucks, my takeaway from playing the other day.

My takeway from playing the other day is that I still prefer BFV ... gunplay, sound design, maps, destruction, team play is way better in BFV then 2042. IMHO ....

Yep. Too bad so much of the community dumped all over V without ever playing it and went and played Rainbow Six Siege and Battle Royales instead, leading DICE to make Battlefield more like those games.

Every bf fan asked for a game like bf3 and bf4

I think a lot of people would disagree. Not that it matters now.
There were more people playing 3, 4, and One that 2042. The only bump they'll get now is through Gamepass.

Games got such a bad rep I don't even think gamepass can save it.

Oh. I'm by no means it is going to save it. Just that it might give a bump for people wanting to try it out of morbid curiosity.
Even if it is raising numbers right now, they'll be gone within a month.

This is a failed game.

99% of games released with a bad 1st impression never recover.

Gp didn't save halo what makes you think that is saving 2042, the game is trash too much input lag

Never said it was.

With what a nerf gun? GTF OUTTA HERE! You shot for peoples wallets while trying to give minimal effort and it shows. Game is trash move on.

Have to agree with this.

Umm the moon is up there not down there.

“Hey we’re going to break our promise and stop supporting a game that is finally starting to turn the corner into excellence so we can make an even better game next time! We promise THAT one will be AWESOME!”

They showed their hand with how they handled BFV. Anyone who fell for it with 2042: thats on you.

the game plays horribly and looks awful as well

Seems to be the same game to me. Played it for a week on launch before dropping it. Tried it again for the first time last week where I spent five minutes wandering around aimlessly on an empty dull map where I never even found anyone to even shoot at. The game just completely did away with the battlefield formula in favour of trend chasing.

CorndogBurglar63d ago (Edited 63d ago )

If you want to play a good, new Battlefield game then go play Ground War in CoD: Modern Warfare 2. It's basically the Battlefield we've all been asking for.

It's a sad day when CoD is doing Battlefield better than Battlefield.

MW:2 is certainly better as a game than 2042, but Ground War feels like a store brand version of Battlefield. It feels like a Battlefield-style mode made by people who had never actually played Battlefield but just heard it described a few years ago.

I don't agree with that at all. There are small things that could be changed to make it exactly like Battlefield. But I don't think that's the goal.

The only real noticeable things are small nitpicks.

No gun ports for passengers inside an armored transport to shoot out of. (Not a big deal since I l've probably killed 5 or 6 people like that since I started my BF career back on BF2)

They changed the transport helicopters to be something slightly different. When you fly a helo over an area and jump out, it becomes a spawn point until it is shot down, regardless of whether there is a pilot or not. This is actually a pretty cool mechanic.

There are no classes, so that is a bummer. But you can build whatever class you want through your loadouts. But I do think classes are a necessary change that's needed.

But it's a damn close representation of previous Battlefields. I wouldn't say it's as good as BC2, or BF3 or 4. But it's better than any of the other schlock Dice has put out since then.

If they just made slightly larger maps to accommodate jets and created classes instead of Operators, it would be great. Ghe gameplay itself is solid.

SenorFartCushion63d ago (Edited 63d ago )

DICE should have been busy making a good game than trying to destroy lunar objects.

BF2042 didn’t even have single player.

Always an excuse why they keep releasing trash BF games.

The shot for the lowest common denominator. This is objectively evident. Saying otherwise is calling BF fans stupid.

Is it though? 128 players was a mistake. I said it before launch and it is still true now.

People keep saying the game has changed, it hasnt changed its the same game it has more maps and maybe some of the bugs have been fixed, fixing a bug doesnt change anything about a game (having said that the last i played the cant ADS after exiting a vehicle had come back) . It wasnt BF right from the start and that hasnt changed. I went and played 1 again, hell i forgot what it was like to feel like you are a soldier in a war.

They sponsored a bunch of streamers to play the game and attempt some hype just a while ago making these streamers praise the game. Boy was I laughing lol.

Take notes and I mean really take notes and work on the next game already. You can't fix something that's beyond fixing.

So full of it. They’re relentless!

The game is a lot of fun now. Watch Squid G play on YouTube and try to emulate his crazy play. So much you can do!!