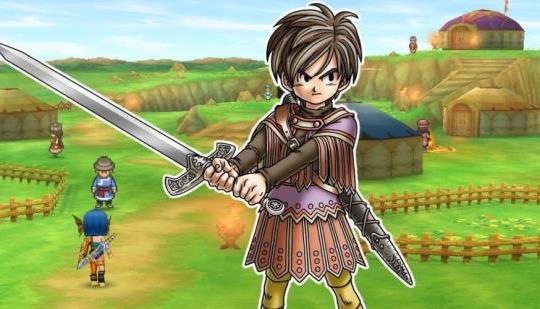 Dragon Quest IX was a quality JRPG, but it is only available on the DS, when every other game in the series has been ported to other platforms.

I'd love to play this. Couple things keep that from happening. I don't like portable gaming. I don't think my hands are huge but I bought a 3ds for braverly default and my fingers would cramp up after 20 30 minutes. Kinda killed it for me.

I hope they do port it but port it to everything. Not just the switch or whatever. I'm still salty about dragon quest treasure hunters being switch only. I really wanted that. I loved dq11. I know it's a different type of game but I like those types to

He only cares about Sony products at the end of the day so he gets bitter when not everything comes to the platform. Doesn't matter what the game is at this point. Its the idea that non PS platforms also get exclusives timed or otherwise that rubs him the wrong way. 🤣

@zeek I root for playstation but that shouldn't stop you from getting a pc or switch. Heck some ppl buy Xbox series and claim they want to play legacy titles that aren't on pc. I find that a little ridiculous but whatever floats your boat.

I prefer to game on my ps your right. Bitter idk u might be stretching it. I'm bitter cause Nintendo released and continues to sell broke a joycons. I'm mainly on the point of dq11 released on ps4 I bought it day one and re bought it on ps4 when the definitive edition came out. They decide to release this on only the switch while I've invested major time into 11 and would like more in it.

Say what you want this is a video game website where we can type messages so I'm just saying how I feel.

Also don't tell me how I feel. If a game comes to another and I'm interesting I have a right to say damn I'd like to play that on ps. I've been gaming for 30 years I know how going works not every game will come to my preferred platform. That's why I have all three. Just that I prefer again to play games on my Playstation. Tell Nintendo to come with some correct controllers next time and people wouldn't have an issue.
I have a ps switch Xbox and laptop with steam on it. I go by the same name on all of them

So in the end don't put words in my mouth ja

its the same with dragon quest 8 on the 3ds
i wanted the remaster for consoles too.

That's right. 3DS's DQ8 was not the port i wanted with all the jaggies and deforestation. I was really disappointed so i'm not finished with this issue, i want a proper port/remaster without graphical downgrade.

right?
like why did square even consider it? i mean, money yes. but damn. DQ8 is not a game you make for a handheld. ever.

Oh no, Not another Top Ten: RPG & Platformers