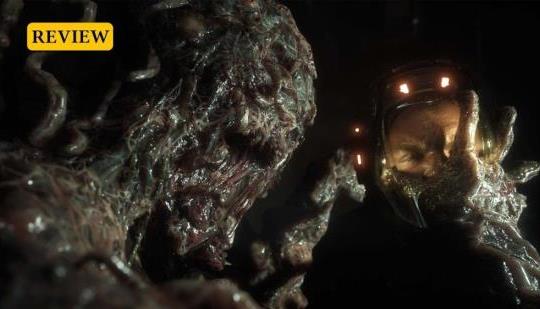 The Callisto Protocol - The Kotaku Review

Kotaku: "More Death Stranding than Dead Space, this flawed gem is one of the most ambitious games I've played this year."

The dodge mechanic is so easy in this game... I don't get it how these people can be reviewing games, if they have problems with that.

Not only just that, there are accessibility options to auto complete QTE and auto dodge (a bit broken but makes dodging easier)

The more I play these game the more I like it

Yep you literally hold left or right on the left stick and if a enemy is crawling at you use back with the left stick.
Also it's mainly the first half the game you use the dodge mechanic because after that you've upgraded a fair bit to use other weapons.

I can understand all criticisms except for "the game is frustrating", "dodging doesnt work". I read a funny comment from a reviewer that said "the combat works for 1v1 encounters but become frustrating when facing many enemies". Why should facing multiple enemies be easy? I love that it's strategic and if you dont have strategy you'll die.

Some people should not review games at all to be honest.

I agree with what you're saying but I did find multiple enemies in smaller areas difficult but agree nowt wrong with the dodge mechanic overall.
My main gripe is lack of credits to upgrade early on in the game but I guess they wanted you to feel vulnerable at first I guess.

"My main gripe is lack of credits to upgrade early on in the game but I guess they wanted you to feel vulnerable at first I guess."

If you read the rest of that review they explain it.

You can't dodge enemies out of the FoV and many enemies have 1 hit kills which leads to repeated dying in large groups.

Now yes you could say "well duh thats realistic" but come on. Your fighting alien zombies on Jupiter's moon. Realism went out the window hours ago.

That arguements so bunk and laughable to me. If games didn’t have to worry about realism because of its plot than we’d only have goofy ass games

You can move around and use other weapons if there's many enemies... It's your own fault if you go bashing heads against a large group.

A flawed game highly enjoyed by a toxic as f and flawed review site. Makes sense.

Yeah um, it sucks. It should be fun, not a chore. Even if it is only half the game that is a hurdle. Pass and/or wait for a serious game changing update.

You mischaracterize it. You should have said 'fun not difficult' that's the issue at hand. A chore in videogames is something like go kill 10 crabs. That's a chore. This game I don't think has chores. It's difficult for many and that appears to be the problem.

I found it difficult in the first 5 hours after that you've upgraded a few things and it becomes more about analysing the situation and adapting to the situation.

Haven't played it yet so no opinion on that but I definitely don't have issues with difficult games. Like all souls and souls like games. And I actually don't find those games particularly difficult. Old school games are much harder.

I played to when I got my gun...this game so far is fun and creepy, the graphics are wonderful to behold, the combat is very heavy which I like a lot, the atmosphere and the accurate dismemberment/gore is a sight to behold.

So far the notorious dodge move I have read about before playing is super easy to pull off. I have had only 1 or 2 instances where the camera lost the auto lock on to the enemy resulting in an unfair hit. I also head complaining about fighting multiple enemies at once, so far all multi enemy fights I encountered they all pretty much wait their turn, they never attack at the same time..so im not sure what that complaint is about.

Only tiny tiny tiny, so small regret is I got in on SX, which look wonderful in performance mode to me(that's what im playing on) but I want to play in Quality mode, but it's broken with missing effects....i hope they patch it.

Well said, my thoughts exactly. It's also about adapting to the situation and what objects etc are in the immediate surroundings to use

Playing on PS5 and I’m hooked! This game is so good, dodging is easy but also intense. The scenarios are personal and confined which makes you feel more on edge. The weapons are super easy but the focus on melee is pristine. I’ve seen minor glitches and 1 crash so far but this games an easy 8-9. If the pc and Xbox performances are that bad I can see how it might lose 2 points on those systems which would be fair.

Also playing on medium and the guy who said he should’ve played on Easy must really suck at these types of games.

More death stranding!?!!?!!
That game was phenomenal...definitely gonna give this a go now. Anything compared to death stranding is a huge positive for me. Truly a new gaming experience.

Look, all I can say is I’m on Ch 6 and I’ve taken to account all the negative points from reviews and it just simply isn’t my experience with the game. I really like this game, like a lot, and I’m not trying to go against what the vocal group is saying just to be “that guy”.

I think one of the games it reminds me a lot of is Hell Blade. If you’ve played that and get somewhat how the 1 on 1 encounters work when you engage an enemy you’ll understand how this game plays. It also has that forward momentum narrative driven level design.

I honestly think these games are their own unique genres. It’s not like you’re holding up on the controller going from point A to B. There’s definitely side paths that lead to some loot or item boxes. There’s hidden weapon schematics. The areas are all designed uniquely and make sense, these are how rooms and structures are built. There’s definitely more to the design than a “corridor walker”.

The story is told exactly how Dead Space’s story was. It’s all told through the events. There’s no real backstories, you’re the dude in a circumstance and you’re uncovering things in real-time. You’re always with the protagonist so they don’t do cutscenes that break away and have the villain talk.

The main thing is just approaching the combat differently than you would in a shooter. Think Condemned, Hell Blade, and even boxing games and you’ll sort of see what I mean.

Hellblade…hmm you know I think you’re onto something! I knew there was something else it reminded me of.

Not that concerned about Kotaku's opinion on anything. Remember when they slammed the One X for having too many holes? Yes, that actually happened. Plenty of reviews of this game already without needing Kotaku's smoothbrain insights.

They are right that this game is good and that Xbox has too many holes tho.

Im a couple hours in and I’m loving it so far. I don’t really get what people are saying about the combat, I think it’s a solid system, combining the dodges with the quick shot system, paired with the awesome gore, im digging it. I know PC has performance problems which sucks, but I’m not personally having any issues on PS5.

Personally I’m enjoying it. I didn’t know whether to buy it or not based on the first couple reviews, but then I read some more positive reviews too that made me willing to risk it. Seems fairly polarizing to people.

Anyway - I like playing it. I don’t think it’s what a lot of people wanted it to be (a complete dead space clone - which it’s not) and maybe it’s a slight bit clunky or rough in a couple areas but it’s fun, it’s entertaining, the presentation, acting and sound are top notch - so I say F the haters and lighten up. It’s one of the highest quality titles to be released this year and considering it’s been a bit of a thin year all around, I’m completely ok with it. .

The Callisto Protocol Review – Are We Scared Yet? | FingerAction

Should Launch Buyers Of The Callisto Protocol Get Free DLC