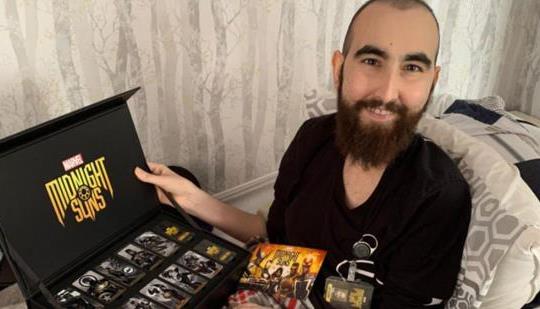 Luke was here: A remarkable moment of kindness during the making of Marvel’s Midnight Suns

From GI.biz: "There's a tree in Marvel's Midnight Suns with an engraving on it. It simply reads: Luke Was Here.

The Luke in question is UK video game fan Luke Wiltshire. He was diagnosed with neuroblastoma -- a rare and brutal cancer -- when he was just 14. Over the nine years of treatment, and the immobility it brought, Luke had found solace in video games and Marvel. He could do things in a game he simply couldn't manage in the real world.

Last year, Luke was told the devastating news that there were no curative options remaining. He wasn’t going to get better and would now receive end-of-life care. He relayed to his family a few final wishes, a bucket list, that consisted of three things: He wanted a puppy for his mum to look after once he’d gone, he wanted to have a hog roast... and he wanted to play Marvel's Midnight Suns."

Brave man. Wishing for a puppy for his mum to help her whilst grieving shows he was kind, and the hog roast -very relatable! Rest in peace Luke Wiltshire.

Love thy neighbor as thyself.....

The greatest of all the commandments.

Made me cry this has 💙

This should be top news on N4G

Nobody should have to endure what this man and his family have gone through. Rest in Peace Luke