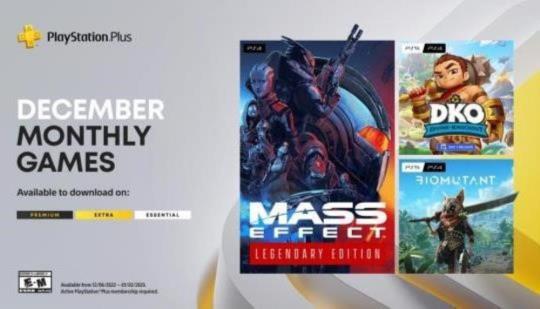 PlayStation Plus Monthly Games for December

Well its official... gotta get me some of that biomutant.

I was tempted to buy it during the sales. Heard good things about it and that it was underrated.

I don't even know anything about Divine Knockout, but Mass Effect and Biomutant already make this a great month.

Biomutant was just one of those titles that a lot of people didn't want to take the risk with their wallet as an unknown AA with mixed review, but many of us will gladly give it a shot on a service like this. I've heard enough people say that they enjoyed it to at least give it a go.

Just seen we get all three Mass Effect games and over 40 DLCs thrown in! Awesome!

Turns out Divine Knockout is launching on Plus. Looks like a fun multiplayer fighter.

Yea, I looked into it and Divine Knockout is apparently a free to play game by Hi Rez studios. That doesn't necessarily make it bad, as I quite enjoyed SMITE by them. (actually quite a lot, despite not being a big fan of the content structure typical of f2ps. The gameplay was solid.) This PS+ release is the Founder's Edition which includes 8 Gods, cosmetics and a special bonus for SMITE. (according to Hi-Rez's website)

Even if I don't end up playing much of Divine Knockout, Mass Effect and Biomutant are definitely wins. I'll give it a shot though.

Eh, I heard PS Plus never gets day and date new games. Surely this is a mistake?

We've had alot of good months recently with PS Plus.

Good month! Anyone know what the xbox gwg games are yet? They've been awful of late.

think they were announced yesterday and were really really bad.

Oh God, I just checked. Why do they even bother? It's actually insulting.

they are like Bruno... we dont talk about Bruno.

I hate myself for knowing what you're talking about. I also hate you because I can't now switch it off in my head, you git!

I'm really pleased with this lot. Only down side is no time to play them in December ha

On second thought I think ill download it and still buy it physical i just wont open mass effect. Ive already got biomutant but i aint trippin

Not bad, Mass effect LE for those who haven't played it is genuinely a 10/10 game, favourite Sci-Fi series in gaming.

If you seek tge leak from Dealabs.Then it's 100% true

Never heard about Divine Knockout before. Time to try Biomutant.

TicklefistCP67d ago (Edited 67d ago )

Correct. I wasn't exactly hiding it.

Still not been able to stop the leaks then. Really good month at any rate.

Came to say that Biomutant is that perfect game for this type of service (GamePass too, I also have that) because many of us maybe didn't want to pay full price or have a huge backlog, but for "free" I will definitely install it and I thought it looked pretty good.

Wow. I was worried PS Plus was gonna go Games w/ Gold. Boy was I wrong

Agree 1Disagree 0
▼✖-+
SPAMInappropriate
Show all comments (36)
The story is too old to be commented.
50°