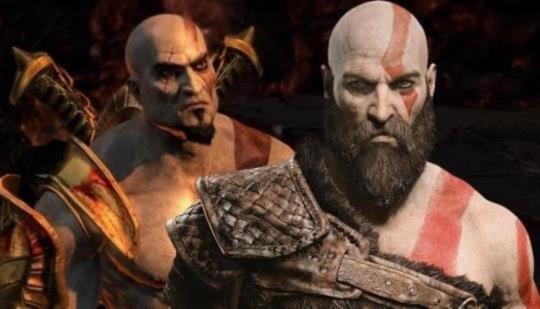 I dont know... i really dig the greek mythos more than norse. If they make a 3rd chapter then i hope it is egyptian. They had some interesting gods as well.

Same here. LOVED the last two games, but I was much more aware of Greek mythology, thanks to the old classic films.

Mythos-wise, there's a lot in Greek mythology but both are solid in their core elements at least.

But, story-wise, what they've evolved Kratos into after so many years of what he was in the Greek mythos... so much better and honestly what I was looking for.

If Kratos was just like he was in the other God of War games, I wouldn't have played any of the new ones. I was already tired by GoW 3 with it, any more beyond that? No thanks.

I had more fun with the Greek saga and at the end of the day, that's what people play video games for: to have fun, so I disagree.

I am with you. The new games are more 'mature' or 'grown up' in tone. I prefer the original trilogy but each to their own.

Its not about the Greek vs nordic...its about the gam approach. The new saga is much better, feels the other one too much unispired and the gods without any development.

The game overall is better and it’s 3 generations later, it should be. For it’s time the original God of War was amazing. Let’s not forget, one of the best told and creative stories of all time. The game starts at the end of Kratos life/story and goes through the motions of backtracking. Every detail of Kratos explained such as the color of his skin, the blades, his tattoos, and his journey that unfolds piece by piece. Not to mention the creative graphics during the CGI. Beautiful.

boss fights were much much more epics before, fighting the elderly didin't do much for me lol

I have said the same lol. He’s the master of
Magic and they gave him the same lame ass bifrost powers as heimdall, what a letdown. Freya was a better boss fight in terms of scale.

Yes and no but for me personally i like the Greek mythology more.

I'm biased, so I will say Norse for me. The greek was more fun for me, but I was also way younger at the time.

I agree. Their interpretation of Odin was lame in some ways but that’s my only complaint. It wasn’t until the Norse saga that they started mixing mythologies and that’s what makes it so special. It could go so many different places but I think Celtic is next based on dialogue.

The greek saga has a better story/adventure, better gameplay, and is just more fun. I like the new god of wars but neither of them is anywhere near the greek trilogy.

Greek saga was a grandiose spectacle with wider enemy and weapon variety. Too much walking, talking and handholding in the Norse saga for that to be even be close to true.

True. It became much more about story in the new games. It’s about how all of these mythologies weave together instead of war god on rampage. The plot twists and all that. I like that though. I think the franchise needed that to survive.

Speculative Spoiler:
it’s not the first time I have read that Merlin from Arthurian myth was referred as a priest of Odin due to the similarities with the Irish god lugh but Making Mimir merlin is pure brilliance. When Mimir started talking about his homeland and the lady in the lake my jaw dropped. That’s “who’s Loki?” Level stuff.
/Spoiler

It weaves the mythologies together in a clever way and that’s awesome. It’s the wow factor story instead of the wow factor boss. War god on rampage was more fun though and I don’t think it’s debatable objectively. Stuff like the Posiden fight made you feel like you were fighting a god. I don’t think that’s the fault of the mythology though. The Norse gods especially Odin were underutilized. The storytelling is still masterclass though.

i hated the first few god of wars until the reboot. Hated kratos's character and the childish writing. thank goodness for the reboots

I like the new GOW, but I also miss the straightforwardness and the more epic nature of the Greek parts. I mean, for example, the scenes where the titan Cronos crushes you between his fingers. Climbing on a walking Pandora's temple, etc...
The new parts have more RPG elements and are more mature on the game side, but they have lost a lot of gods scale

I hope they do Egyptian next. It's one of the main reasons I loved Assassin's Creed Origins so much. Just in general, we need more games set in Egypt.

They have all been excellent which keeps me going back for more. The games have also evolved somewhat, but kept in tact what made it so good to begin with.

I prefer to just appreciate the series as a whole, very different games, I think the action and scale on the Greek trilogy hasn't been matched by the Norse, however the story telling and characters eclipse the Greek.

Both part of one of the best IP's ever created with consistent industry leading quality, Santa Monica have spoiled us.

I dont think one has to be better than one as they were both great. One of the best things for me was whenever his past life in Greece was brought up in conversation and i would just lose my shit lol

The Norse saga couldn’t be as great as it is without the Greek saga…. That’s silly to say

Don't get me wrong, I loved Ragnarok, but in no way was it as epic as 1-3. I don't know if any of you remember the first time you fought the Hydra in 1 or when you're taking on the titans in 3, but there's so many cool and epic moments that you don't really get in the new games.

Plus, Greek mythology I find has more interesting creatures and mythos than what we got with Norse mythology. I'll never forget the opening fight with Poseidon and battling on Gaia in the beginning. You rip off the one god's head to use as a flashlight. Like, man... lol, those games were really great.

The brutality in the earlier games were way crazier, too, like when you're tearing off Cronus' finger nail. Even with Ascension like when you beat the crap out of the chick that had bugs coming out of her chest pores. To me those will always be my favorite God of War games.

These new one's were great in their own right, but just not the "God of War" to me.

God of war 3 was peak God of war and kratos at his peak, with great graphics on the ps3.

Gow 3 is my favourite in the series, Norse one is also bloody amazing not knocking them in anyway way they are amazing but yea gow 3 was just the peak of what the series is and who kratos was so it's my personal favourite

Disagree the Greek mythos in the originals is EPIC !!!

I definitely prefer the new soft reboot than the originals. Both are good, but I liked the original games; love the new ones.

I'm tired of both. Same stories over and over. Norse, Greek, rinse repeat. The world is a big place. Mythologies are all over.

Two completely different games you can’t even compare them lmfao…

its handled quite differently

Only there wouldn't be one without the other.

After playing this game, Kratos drinks green Thala milk in the last one compared to waving a light light sword in previous games, but hey...

Yesterday I was replaying GoW 1 for the first time since 2011 and it's still pretty dang good. And it's WAY more rated M right off the bat. There's at least 4 nipples in the first hour.

It's exactly the opposite, great story but it begins to resemble Ubisoft errand boy games

Disagree. God of war 3 has some of the best boss battles in a video game period!

Agree 0Disagree 0
▼✖-+
SPAMInappropriate
Show all comments (39)
The story is too old to be commented.
40°

Has Kratos Retired After The Harrowing Events Of God of War: Ragnarök?