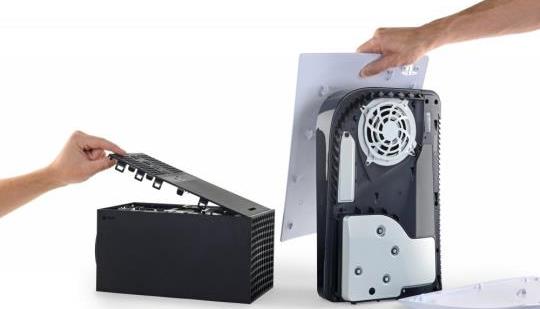 Adhttps://store.steampowered.com/app/1488200/Symphony_of_War_The_Nephilim_Saga/?utm_source=n4g&utm_medium=native&utm_campaign=sow_n4g_native&utm_content=png
- Comments (44)+ Comments (44)
TopNewestOldest
Expand all
The story is too old to be commented.

XiNatsuDragnel11d ago (Edited 11d ago )

I'm not surprised there it wouldn't any later.

Yeah, also doubt of a mid gen TBH. It could happen but I just doubt it. All the people waiting for it good luck to you. Time going by fast and it should be getting easier to get a ps5 and Xbox better hop on it asap.

ActualEngineer10d ago (Edited 10d ago )

As an actual ENGINEER, you are clueless and mid-gen is inevitable. A certain node in tsmc or samsung or intel cannot be produced indefinitely, as the actual buildings where production takes place are special anti-sysmic clean-rooms with VERY high running costs and expensive to hire and train stuff. These factories within factories are updated constantly in certain predefined cycles and time schedules.

As such, as time goes by it doesn't actually become cheaper to produce a certain node (for example the 7nm tsmc) in the same factory, so the chip manufacturers keep moving the production cycle from one factory to the next, inorder to produce the next node while the current factory is updated with new equipment to house future nodes. Inorder for a node to keep being produced, the actual building must stay intact and maintained and production needs to move somewhere secondary, but this still doesn't guarantee that the node production will reduce in costs to the buyer. Even the automobile industry, 5 years ago, was forced by the manufacturers to move to a more modern node.

Now it is actually CHEAPER to shrink the architecture and use a smaller die in a newer node than to keep producing the same node. This is why we see mid-gen slim models that are cheaper ... this is because the actual chip is on a new node, has shrunk and uses ALSO less power ... producing less heat. If on that NEW node you were to produce dies of the same size then you would be making a PRO faster version of the same console.

All in all CLUELESS, you know nothing.

@ActualEngineer cool long story bro for someone else to read thats not me.

ActualEngineer10d ago (Edited 10d ago )

Oh also I forgot that there is a faster version of PS5 and Xbox series X ALREADY out there, on the same architecture and node. When you create chips, you design them with capabilities higher of what they will actually use. Then you create a base-line for performance and you lock each chip into that threshold. This happens because some clusters within a chip might not be functional in some chip units while almost all clusters might be functional in another. Then you can stock the better binned chips that use almost the whole structure and only sell the lower binned ones. When the production has yielded enough "good" chips from a certain node, you then sell a product in it's "PRO" version, because now you have a big enough stock to call it a product.

This is what nvidia does with their rtx xx80 to rtx xx99 ti super ... they use the same chip but the xx80 is released first with the stock from all the "bad" unit chips and when production has yielded enough "good" units, they release the rtx xx90 ti super (or how ever they gonna call it)

You also know nothing. The Pro models were made to try and capitalise on the 4K boom. Now personally I think it is possible we will see one but it certainly isn't guaranteed. Especially since the original isn't fully in stock yet. This time last gen we were only several months away from the Pro version releasing. And you can't compare PC. Them making a TI version of a card is wildly different than making a pro version console. Until Sony or Microsoft announce one you're absolutely clueless as well.

@ActualEngineer
You ain’t an actual engineer dude. Calm down.

@andy85 lol go read IGN, you don't even understand what in saying... no worries though cpu architecture requires an actual FUNCTIONING brain to understand.

@CobraKai how old are you, like 12?! Spent 5 years studying in a university Industrial Design Engineering and Robotics, I have experience in IOT, Cybernetics, Computer Science, Robotics, Mechatronics and MAINLY Industrial Design of Electronics. I passed Nanotechnology with a 10/10 ... now go read a book child.

@Actual
Sure you did. I can do the same thing. I’m an actual GAME DEVELOPER and you are CLEARLY CLUELESS.

See what I did there. So calm down. No need to be all aggro, cuz the only one that needs some growing up around here is you. Mr “actual” engineer.

@actualenginner only just seen this and 3 days later you're still a clown.

I mean covid really seems to have delayed the whole "next gen" experience we usually see by now in a generation, but we're still in cross gen territory. So i dont mind extending the life of the console to make up for that.

I feel the same. Really happy with their current capabilities, I just want to see them utilised more. I imagine there would be a "slim" model at some stage though.

The Switch though... please Nintendo, I want to see a power bump. 30FPS ruins the magic of your games.

It’s the lag and crashing that bothers me . Xenoblade 3 is the best example I’ve seen so far . Occasional Crashes and lag during battles of more than 2 enemies

Pretty remarkable what developers were able to get out of the even at launch outdated Jaguar cores in the PS4 and XO.

Even if lastgen consoles didn't exist developers would still have to make their games scale to low-end PCs.

I just hope they will still have a disc drive and support physical media.

I agree I hope so too

I know Sony will and still go the traditional way route period.

This is my main concern.

I am not worried if there will be new consoles (there will be), but in what shape or form?

Will it be a streaming device or digital only? These are the questions right now.

That aside, i am not remotely surprised by the expectations of 2028 and later. As soon as Jim Ryan stated that they plan to support PS4 up to 3-4 year post PS5 launch, i knew this might be a longer generation than previous.

Ouch, that's going to sting for performance. They'll have to release those Pro ones in the next couple of years though no doubt.

This Gen still feels like it hasn't hit it's stride yet due to unprecedented historical events that has taken place recently. I say stretch it out to 2030 if need be. I want every drop squeezed out of the ps5 and Series X before any talks to next Gen.

think 2028 is a realistic expectation given Covid's delay of this gen. Don't wait too long though. Look at the Switch. One thing to expect multiplatform performance issues on 5 year old hardware but 1st party software too? I would prefer 7yrs max with static hardware (6 with portable) and 2-3 years cross gen support. Pretty much what Sony has done since PS1. That's why it doesn't shock me to see the PS4 enjoy support in its twilight years. I did think however Sony would've used a couple more tentpole IPs like GOW to entice folks into upgrading to a PS5.

It's already evident that these consoles aren't going to be giving us all their power at 60fps which feels so last gen to me. Psvr2 will be where it's at.

Let's be honest this gen has stalled thanks to Covid so hopefully it will last longer. We still haven't seen the full potential yet. Still in cross gen doesn't help.

makes sense, these consoles are barely off and running.

How about you just pick that date and then hold off 2 or 3 years until you’re willing to commit to next-gen games? This has been the weirdest 2 years I’ve ever experienced with a console generation and it feels like we could’ve just waited for these to launch next year.

Is there even a next-gen only game on Xsex?

xbox wasn’t prepared at all but the pandemic has slowed things down for all 3 but xbox should have at least some big games by now but it’s wait til 2023/4 now .

You’d think with the pandemic slowing things down they’d have just waited until now to release these consoles. I’m just glad that games like FF16 and Forspoken are true next-Gen only games coming around the corner and that things will finally be picking up with us being able to really see what these consoles can do.

Strong likelihood that this year's GOTY will be a cross gen title (Elden Ring or Ragnarok).

Oh for sure. I can’t even think of an actual next-Gen game that came out this year.

Yeah these consoles when they came out held their own we aren't dealing with a gen 7 kind of issue where the CPUs were two generations old on release. Lol

Upgrades are coming. They are already in the works. 2024 launch date.

Revisions arent the same as new consoles. No doubt there will be revised systems (slim / upgrades) in the next couple years but as for new (next gen) 2028 sounds about right.

Will they both be backwards compatible?

kingnick8d ago (Edited 8d ago )

Almost certainly AMD APUs will be used once again so there's a strong likelihood of backwards compatibility.

I doubt MS or Sony will get into bed with Nvidia again considering their experiences with Nvidia and the original Xbox and PS3 respectively. Doubt there'd be notable advantage going to an ARM/Ndivia SOC given the prices Nvidia likes to charge unless ARM gets significantly faster then x86.

Im betting on a streaming box/thing not technically a console, to try and dry up the physical market. then another console, there will be someting before the next 5 years is up.

Perhaps this gen should actually start before thinking about the next. It’s only now I can buy a ps5 if I want one. And there is very little incentive to do so in terms of games.

Maybe that’s when gta 6 will release

I predict the horrifying beggining of cloud gaming, developers would love to see gamers with no access to game files.

What a depressing thought.

If that future eventuates I'll just become a retro only gamer.

I hope a PS5 Slim is not too far off.

With current inflation I can't imagine a scenario where a much more powerful revision is launched and doesn't cost significantly more.

Did you know a new Need for Speed came out last week? | UK Boxed Charts

The PS5 Is Still Paying For Sony's PlayStation 3 Mistakes