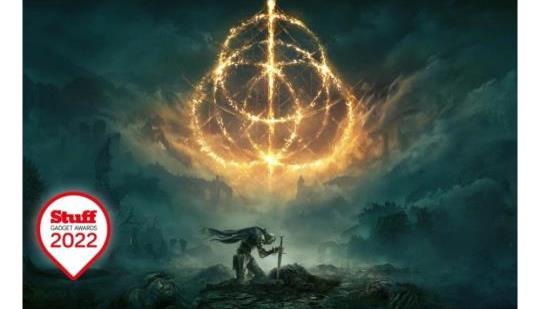 The Stuff Gadget Awards 2022: Game of the year

Stuff writes: We will never forget the barnstorming February of 2022, at the end of which arrived quite possibly one of the greatest games ever.

Well deserved. ER is the GOAT.

Hmmm they say one of the greatest games ever made…. I think Elden ring is great don’t get me wrong, however… I don’t think it is even the best souls game. I would put Bloodborne way ahead of it, along with Dark souls 3 and Shadows die Twice.

In my opinion Elden ring is probably the worst game they have made when it comes to actual gameplay it doesn’t control as well, boss are not as well thought out and lastly the lore wasn’t as cool..

God of war is my game of the year. They went all out with that game, from the moves/combat the lore, story, graphics it’s all really well done. Plus Kratos animation the game just feels good to play. Even the way he jumps from ledge to ledge feels good and the climbing.

But what do I know. Disagree all you want. To each their own.

Playing BB now, I would put BB and ER just about even myself, loving the Chalice dungeons, these should be in all From Soulsborne games.

God of War certainly is a looker for sure.

Bloodborne is in my top three of all time. I did play the hell out of Elden Ring too. BB is chef's kiss.

I think Elden Ring 2 will overcome the shortcomings of ER: combat, animations, and boss fights.

- I was expecting to have the option of playing different characters with different types of movement. Like one character having the similar movement of Sekiro, another of Bloodborne, another with the DS3 movement and then be able to mix and match.

- The magic and summons look cheap.

- The boss fights are boring and the bosses have infinite everything, while the playable character is slow and clumsy even at SL 100. This is why there is an overreliance on summons and OP weapons if you're not the very few that are overwhelmingly excellent at the game.

All in all I enjoyed the game and waiting for the DLC, but it is not better than Bloodborne, which is a near perfect "Souls" experience, nor are the boss fights in ER better than DS3.

Nah, ER is mechanically leaps and bounds beyond any game they’ve made. There are many valid arguments to be made about why bb, ds3 etc is better but that is not one of them. The breadth of control it gives is unmatched.

How? Lay out your argument.

The combat is know where near as tight and perfected as the past games. They have you fight the same boss multiple times with no Variant to them.

And last the dungeons are not even close to bloodborne. Those where massive with twist turns and traps.

Don’t get me wrong I liked elden ring. Sadly it’s just not their best game.

Spending countless hours in ER pvp, and going back to the older games they feel just bad by comparison. Jumping adds a lot of depth to the combat (evasion, poise damage/combos, an entire new set of attacks), crouching attacks add a new higher speed attack category as well. There are guard counters, new and unique parry abilities, horse combat etc. You can customize any standard weapon with whatever weapon art you want now. I could go on like this but I think you get the point. Once I got into the pvp the difference was huge. If anything there’s just too much and not enough polish, but considering the development time and the demand for release, it’s understandable.I think there have been more fixes and support through patches than with previous games. Anyways you say combat isn’t tight and then go back to your previous arguments which aren’t about combat mechanics at all. That’s a separate conversation.

Id have to say ER has the best controls of the souls games, the bosses are the fastest and most complex in the dark souls series aside from Sekiro, which isnt in the same class due to the nature of the games (playing DS and playing Sekiro are not the same experience). imho ER is one of the best open world games i have ever played, in every direction you can think of there is towns and castles and ruins and caves and beaches etc all filled with things (and useful things and interesting bosses) to find. It is let down in the lore department but id say all souls games are.
ER still has a huge fan base with poeple playing trough again and again in different ways with different characters and styles on new game even +10

GOW has been out for ten seconds and is PS only. Hell if that can beat ER then more power too it, but they dont sound to be on the same level. Then again i hear there is a find the dog toy quest, quality stuff.

Bloodborne is faster than Elden ring. Anybody who has played both of them knows this.

God of War is Above the quality of Elden ring but not Bloodborne.

And lastly what are you talking about, the games are known for their lore and you say they all have bad lore? They usually have the best.

And it doesn’t matter that god of war just came out and is on one console. That has nothing to do with the Discussion. Game of the year is the best game of the year regardless of what and how many platforms it’s on.

Play god of war, and tell me it’s not on the same level as Elden Ring.

Has Kratos Retired After The Harrowing Events Of God of War: Ragnarök?