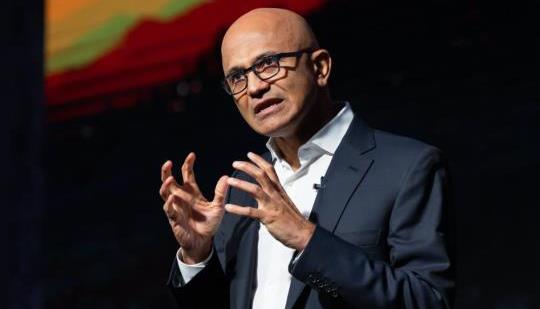 Adhttps://store.steampowered.com/app/1488200/Symphony_of_War_The_Nephilim_Saga/?utm_source=n4g&utm_medium=native&utm_campaign=sow_n4g_native&utm_content=png
- Comments (100)+ Comments (100)
TopNewestOldest
Expand all
The story is too old to be commented.

You don't create competition by making a point of trying to buy up the biggest publishers. In fact, what that shows me is that you have to buy up the industry because you feel you can't compete.

Can’t beat them, buy them

Can't buy them, pretend to suddenly be the little guy and hope nobody notices your past practices.

And that's exactly his point.

So, how does that help the industry?

They stay to type and former example, they'll buy a studio/publisher and let them stagnate till said studio/publisher either buy's themselves out or let MS shut their doors possibly dragging out the remains in a gimp suit - see Rare.

So again, how does that help the industry?

They are buying up devs/pubs to have their own thunderdome. Two pubs enter, one pub leaves. Thats competition right there.

Don't tell me, you're serious?

I imagine it's a sarcastic joke considering it's a mad max reference.

I don't know why you got so many disagrees. That sh was funny

That makes sense, I guess they were just practicing with closing studios before moving on to closing publishers

They couldn't compete last gen so I guess they're aiming to rectify the situation now.

“Our entire goal is to bring more options for gamers to be able to play [on every platform] and for publishers to have more competition,” Nadella, chairman and CEO of Microsoft, told CNBC’s Tanvir Gill in an interview Thursday.

So why take it away from a platform then?

Doesn't make any sense. I'm gonna give the guy the benefit of the doubt and assume he was simply drunk during the interview

I wonder where everyone was to post complaints when Sony bought Bungie!?

1. Destiny is still multiplatform
2. Sony doesn't say things like 'our entire goal is to bring more options for gamers to be able to play [on every platform]'.

@Gamer we were here questioning Sony too. Granted this Activision deal is 19x bigger than Bungie. NINETEEN TIMES. It's the biggest games deal ever by a lot.
Anyway, Sony may have decided to buy Bungie as a defensive move so they can use Destiny as a bargaining chip. Remember the freak went through after the Activision announcement. Just speculating though...

@GamerRn the post of a desperate cretin clutching at straws, the article is obviously about PUBLISHERS yet you scrape the barrel with a studio acquisition, here's hoping that was just a brain spasm and you're ok now.

He should say straight we wanted to be more competitive against Sony so we acquired as many studios as we could to have competitive 1st party exclusive games hoping to sell more consoles, it's not a crime to improve your product...

Nadella isn't a gamer by any stretch the fact that he's involved definitely worries me he needs to leave it to the gaming guy's over at Xbox. I don't trust his involvement.

COD will remain on PS5 but will also be on Switch

If that was true, they'd add that to the contracts and we could all finally move on. The trouble is, it isn't.

There are more games than CoD in Activision Blizzard.

What about The Elder Scrolls and Starfield?

If sony were to allow gamepass on its platform I'm sure they would be happy to allow it. Microsoft is trying to force sonys hand by buying the biggest 3rd party publishers and starving them of content, it's their only move left.

They could also try making compelling games on a regular basis, like other platform owners.

That would require actual work, without shortcuts though, and isn't really in Microsoft's playbook.

Xbox has fumbled the ball so many times at this point, big daddy Microsoft just wants to buy the referee instead of honing the lad's skills or finding a more suitable pursuit.

What competition we don't see that imo. If you are taking away Activision games from other platforms.

What games are they taking?

@Profchaos
Wow! That list of Activision ips only tells me one thing... As a PS only gamer, I won't be missing out on anything(nothing on that list interest me) ! Including COD because I don't even play that.

You're working on your next blockbuster exclusive. You just learned that your main competitor has bought the rights to Zork.

More drivel from the interview: “With gaming, for example, for us, it’s a streaming workload. It helps us build the right cloud infrastructure. Think about artificial intelligence, these AI-generated models, differently and how they can be used in both creation and testing of games,” said Nadella.
You can pretty much tell this guy is just spewing buzz words at this point.

He's talking about building games faster and easier with the cloud and AI. Sony and Haven are working on something similar. It's not drivel, it's literally the future of game development. Faster and easier game development leads to shorter dev cycles and lower costs. Using AI for testing means better, more comprehensive QA, which should mean more polished games on release. These are all good things.

Oh yeah, and Microsoft can create games with those Ai models as well. Those are the benefits that Microsoft can bring to these studios. Power of the Cloud (sounds familiar) and AI models that build and test your games (for Halo, they called their AI models "offshore consultants"). Just a bunch of vaporware/slideware buzzwords that refer to a world that doesn't exist.

And to add to the Chopmeister above, we have reached a point in development where the technology far exceeds the talent required to use it. Hence why 30 years ago 2 guys could churn out a game in eight weeks and now it takes a team of 2000 five years.

AI and Cloud technology can hopefully help to reduce the gap a bit - allowing for some tasks to be created in hours or days that would take a team of humans months, bringing down both costs and development time.

If we don't have this, the entire industry could crash because only the likes of Apple, MS, Google, Meta and Amazon will be able to even afford to make a AAA game anymore. Nobody wants that future, even MS. And thus, this is the point being made. Setting a template for future development will aid everyone.

crazyCoconuts72d ago (Edited 72d ago )

In that quote Mr. Nadela is addressing the things MS can uniquely bring to publishers and customers. All this aspirational talk is slideware "future". They have AI/ML tools in Azure just like AWS has. But they haven't made this slideware reality. Otherwise they'd be creating their own good games instead of, well, whatever it is they're doing now

Create your own games. Don't take games from others. Create. Something that you seem not able to do since the 360 days... Remember when gears was launched? In 2007! The hype. How amazing and ahead it was! Huge blockbuster

Competition isnt buying publishers.... Even if it's to get candy crash, of course.

Someone else created that they just paid for it .

The only IP I can think that MS created recently is Sea of Theives. That was all xbox since rare had been bought long before its conception.

Sit down Satya. That's just laughable. This company keeps speaking too much nonsense when trying to buy up the industry that hurts competition.

I remember the time that the big three existed and was a healthy competition cause each one of them were offering unique IP game experiences and it was awesome to own all three game consoles, but now is only the Big one, Playstation only, the only console that is still managing to stay true to its roots and offering awesome game experiences, meanwhile Ninty and MS are only offering cheap gaming and the other the same old and cheap gaming as well with GP.

From time to time Nintendo does release noteworthy titles like recently with xenoblade chronicles 3 and Bayonetta. They also have the new Zelda out soon. Heck Nintendo has more games to look forward to than XBOX.

By reducing the number of publishers out there?

Lmao this is too good, you can't make this up. Microsoft is speaking to us about competition in the market.

how about you try and inspire competition between the incompetent 23 studios you already own. lol

Well, he would hardly say the opposite while it's being probed by regulators.

That being said, acquisitions are a normal, and regular occurrence in this industry and have been for decades, and the industry still feels competitive today for the most part.

Acquisitions are normal but acquisitions of multiple or any publisher is not normal in the gaming space .

No difference between buying 2 big publishers and buying 20 smaller studios/publishers. All adds up to the same amount of studios/content at the end of the day.

So who’s buying 15-20 devs at a time and making them first party like they Bethesda/Zenimax ?

Kk which company bought 20 studios in a 5 year span?! Or a publisher as big as Blizzard? Oh right no one. You're just talking out your behind at this point just like Nadella. That would be 2 big publishers in that span. There's not a single company out there that has purchased 2 publishers like MS is trying to

Most of the studios owned by Tencent, Microsoft, Sony, Embracer, EA etc are all the results of acquisitions.

Heck, Sony have acquired about 10 studios in the past 3 years, 9 of which were in the last ~12 months.

Acquisitions are a fine and healthy part of the industry.

And let’s be honest, if they had the money, Sony would 100% be in the bidding for Activision.

You're actions are the opposite though dumba$$. So sick of PR bs trying to justify all this garbage going on, i miss what the game industry used to be. Yeah it was still cut throat but it was at least a lot more straightforward than this underhanded, constantly lying straight to your face industry we have today.

The only path is to buy many publisher that have blockbuster games and to take them from the competition.

After activision/blizzard deal, I don't even give 6 month for another publisher to be in Microsoft hands..

I will say cloud and good and publisher and hope this fools people !

MS is doing a great job this gen.

If the big boss had to throw his hat into the ring l there’s something up.

Everyone was so pleased to see the back of Don Matrick that's Phil's had WAY too much slack from gamers.

He claims to be 'one of us' and maybe that's the problem. Stop playing games and start managing the production of them. In fact actually don't bother, it's too late for you, we need a fresh mind on this.

I never liked Phil from the start. He was there during the DRM fiasco, and is partially to blame for all the stupid decisions made by the Xbox division for well over a decade now.

I have to admit though, if you're Sony or Nintendo, Mattrick and Spencer have done a 'great job' secretly helping out.

Microsoft are the masters of misdirection through world play and consistent 24/7 PR. They are only matched by the most deception political figures. And they propagate their PR by having others repeat the same nonsense.

With MS, every single thing that comes out of their mouth, flip it on its head and that is the truth.

I think your HAHAs broke the web site!

correction
YOU cant compete and thats why ur buying it instead.

Linux is cancer
Also Microsoft has the highest patent holder in the world and gets paid by that to control competition.