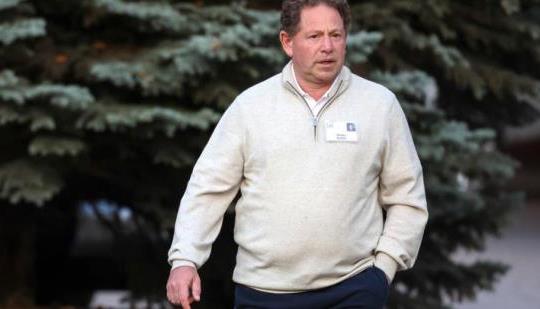 From frat house behaviour claims to regulatory problems, the $69bn (£59bn) takeover by Microsoft (MSFT) of gaming giant Activision Blizzard (ATVI), hit a further bump in the road this week, after a Swedish state-run pension fund sued ATVI and said the takeover is rigged.

I would not be surprised, this means Kotick is trying to save his own hind by selling the company at a bargain price. We heard about the toxic work environment at Acti-Bliz before this deal took place, I have a feeling this very true indeed. This is looking more and more like a scandal.

Don't forget both he and Bill Gates are tied to Epstein. So it wouldn't be a stretch to say they were friends and that's why they rushed the deal. Kotic probably saw the writing on the wall so he called up Bill gates and was like i will sell you Activision at a discount if you don't fire me and then give me a big severance pay so i can leave and start something else.

Bill Gates has very little control, if any, over Microsoft. So this scenario wouldn't happen.

Gates hasnt been in the picture for years. Take the tin foil hat off for this one.

Christ, I feel like I need a tinfoil hat after reading that.

I thought this was obvious from the get go…. Obviously MS Came at an opportune time and bought them when the whole sexual harassment was at its peak. This is not news we all knew this and so many articles were written about it. We all knew Kotick is trying to save his ass by selling. I guess not everyone connected the dots.

That work environment reports blew up was the literal reason Activision sold to MS. Why - how - are people acting clueless about that?

This deal has way too much negativity and should not go through. This isn't pro consumers in anyway

Can't say if this true, but there is one thing I am sure of, Kotick and upper management will definitely negotiate with MS for the best possible deal for themselves and will not be shocked if they left after the acquisition without be held accountable and when get huge sums of cash.

They will definitely get a massive golden parachute. Guaranteed no accountability and a massive payout.

MS got the idea of purchasing after the harassment reports
https://kotaku.com/activisi...

Would anyone actually be surprised if this turned out to be true?

Not one bit, Bobby is probably another Harvey Weinstein

What’s weird about this lawsuit is it’s from a Swedish state pension fund. How the hell do they tie into this exactly? I personally think they are looking to add more money to that pension fund. What a better time to make an accusations when the European Commission is really scrutinizing the deal.

No, they are protecting their investors like anyone would from corrupt suits in power that care nothing for the savings of ordinary people.

And how do you know that???

@rlow, as much as Ristful's comment sounds like something out of Marx writings, it's directionally true I think. Pension funds invest in stocks in order to get returns, and pensions of government workers are funded with planned returns. If the buy out is undervalued shareholders are the ones that suffer, in this case the pension fund itself. Now in practice, would the government really stiff their retirees since they're legally obligated to pay them? Are they using this opportunity to mask overly aggressive planning estimates on returns (Chicago for example)? Who know what's tied up in the real details....

Okay that make better sense to me now. I appreciate the info on the investment side of things.

“Microsoft knowingly exploited the harassment scandal and its commercial leverage over Activision precisely to offer Kotick a way to save his own skin,” the lawsuit says.

“It conspired with Kotick and the board to help them evade the personal and professional consequences of that scandal.”

The lawsuit claims the deal was “hastily negotiated” and would allow Kotick to avoid any accountability, by allowing him to stay as CEO, as well as handing him a $400m pay-out, along with other perks."

In fairness, I should begin with "If true".... But this is exactly the type of thing soulless American companies would do.

Avoid accountability while another company profits by protecting your malfeasance. Jesus Christ.

Kotick needs to be gone from the industry permanently after this acquisition closes. But I suspect he'll probably turn up at some other company.

Gone I agree, piece of shit should be taken out surprised no one took at shot at this fucking shit bag yet.

Wouldn't be surprised and besides this could possibly delay the merger. Or might just canned it entirely? I don't know mergers like that tbh.

This probably won't even be heard in a court before the acquisition closes. The NY one from ~8 months ago still has no court date scheduled.

MS must have rubbed their hands in delight. Activision has some powerful IPs

PhillyDillyDee79d ago (Edited 79d ago )

I wish him the wurst

It's a shame in many ways because Kotick is one of the most successful CEOs of all time and not just in the gaming industry. Nearly everything he touched turned to gold, and he touched a lot of things but oh well, all good things must come to an end.

There's a similar case going on with the NY pension fund too. The reality is these won't even be heard in a court before the acquisition closes. Courts are too slow.

The one thing I am interested in thinking about though, let's say this acquisition was blocked by the EU or something - what does MS turn around and spend the $69bn ($66bn by then I guess) on? Do they turn around and buy a bunch of smaller studios instead + some exclusivity and marketing deals (perhaps on COD?)

Hypothetical and I don't think it will come to that, but it's interesting to think about.

for the low, low bargain price of 69 billion dollars.

Boom!!!! This is getting even worst. The UK and the EC are on phase 2 having a lot of concerns and now this scandal?

This isn't really a new 'scandal', the same thing has been pending in US courts from the NY pension fund for almost ~8 months.

Realistically, this probably won't be heard until after the acquisition closes, so it may be something MS has to pay up for after the fact.

For it to be a conspiracy MS and Kotic had to be making secret insider deals. The truth more likely is MS saw the internals problems at Activision over the years and knew they would probably be at a good price to buy. Insider dealing if found out would be a legal nightmare for MS - very unlikely but makes a good story.

Doubtful it was to protect him. MS probably smelled blood and put in a low ball offer that the shareholders would agree to

Ahh Kocktick living like a king at everyone expense. Sleazy horrible sly human

Agree 1Disagree 0
▼✖-+
SPAMInappropriate
Show all comments (41)
The story is too old to be commented.
50°Fresh2