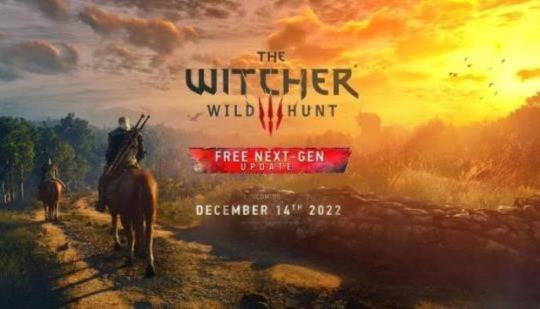 The Witcher Official Twitter: "The next-gen update for The Witcher 3: Wild Hunt is coming on December 14th, free for everyone who already owns the game."

At what point are we gonna stop calling current gen next gen?

It probably seems less "current gen" to the people who still haven't been able to locate and buy one yet.

To be fair it was released last gen, making an update to a new generation “an next gen update”

Once Sony starts making exclusive next gen games outside of Insomniac

^ So what, like Demon's Souls, or Returnal? Neither of which are Insomniac? Try harder, troll.

Sweet update! I can start playing it again after stopping 6hrs into the game 😬

"So what, like Demon's Souls, or Returnal? Neither of which are Insomniac? Try harder, troll."

Neither of those games were first party when they were released

It should have stopped the day the PS5/XSX launched.

This is sweet. I never got more than 10 hours into the game, mostly because I was distracted by other games at the time. This will be a great time to give it another shot and finally play through it!

Like you I tried a few times to get into it. Then i found a lull in games and I played it start to finish. It's well worth your time, one of the better open world rpg's, and fantastic story/writing.

Right, its a patch so if already downloaded, then it will just update correct?

I was playing the Blood and Wine DLC when they announced PS5 patch. I stopped right away and decided to finish it in style once the update lands.

I had just finished the main game again. Platinumed it actually. Decided to postpone the rest of the dlc until after the patch...but may be busy when it releases. Still got calisto protocol and God of war to play around that time.

The fact you get so many downvotes for that is pathetic, play it on any platform you want, enjoy the game regardless of the Platform.

Yeah weird how you missed the guy that said the exact same thing about ps5 and got down votes too, oh look your bias is showing , you better tuck that away fast....

Goes same for both consoles you loser, I don't care where people play their games. However I will say the ratio is clearly worse on said comment rather than the PS5 one.

Then proceeds to call the guy “loser”

You sure proved your point. 🤦

@StarkR3ality I was with you if you had simply said, "Goes same for both consoles, I don't care where people play their games."

However you threw in the "loser" and a pointless, obviously targeted comparison.. the PS5 comment being 19 up 15 down atm, and XBox comment being 33 up 17 down atm. If anything, XBox had a better ratio. You became the childishness that you claim to hate.

So let's just leave it at "Goes same for both consoles, I don't care where people play their games."

The ratio is actually pretty equal.

It wasn't at the time.

It was when they said it too, they just skipped the ps5 one because reasons, I know this because I replied a few minutes after they posted the comment, and it was pretty much equal then give or take 2 downvotes

Shit. I don't even remember what system I have it on

It’ll be an early Xmas surprise, heh. I have it on two, which begs the question on whether saves and trophy/cheevo progress carry over.

Same here. Just checked and I have it on PlayStation. Downloading it now in preparation for the next gen patch.

Pretty sure it’s not when I own the game. If anything I loss money spent

Sweet! Bring on all the current gen goodies my Series X can handle!

Man I wish this had come out much earlier. Theres too much to play now ha. At least its there for me next year

Been playing this on ultra for years now, and even have it modded out, but my Series S is my traveling buddy when I'm out of town due to the size.

The game is already gorgeous on the Series X. Excited to see how much they can improve it.

Aussiesummer75d ago (Edited 75d ago )

Doubtful. It'll be more like 1800 -2160p with ray tracing at 30fps like metro exodus is. Full 60fps without plus the better visuals.

I assume you're referencing cyberpunk with that jab, I have an RTX 3080 and with DLSS set to balanced and graphics on high, RT on medium, I still get between 45 - 55fps at 4K. Don't be a snob about it when PC players still have to make sacrifices to visuals unless you own a 4090, literally the only card that can do proper ray tracing at 4K60fps

Please be optional so it doesn't automatically destroy my mods on PC.

Pretty sure these are only for the console releases.

Pretty sure but also pretty wrong. Its indeed an update for the PC version as well.

Nada. This is aimed for the console releases.

The Witcher 3: The Wild Hunt – Complete Edition releases on PC on December 14th. It’s also coming to Xbox Series consoles and PlayStation 5 as a next-gen update.

Pretty sure it will be a separate thing.

It's a complete edition with some mods and all DLCs, so it'll pop in your library as a separate download.

Too late, i finally smashed out the entire game+DLC recently

Been a long time coming though, can't wait to play it again, one of the best games of all time.

It is a great game, will fire it up again in December as been a few years since I played it last.

This is exciting news. I just hope it will be a noticable bump in visuals.

I've purposely held off playing the DLC packs since this was announced. However last year I played the 3rd game for the 1st time and absolutely loved it

Great news! Was about to start a new run and finally finish the game but I'll hold.

Uninstalled this after first Griffin fight. New next gen update was on way tbh it looked really good anyway

I've booted up the game again about two weeks ago, just taking things very slow. I haven't even reached the Ladies of the Wood quest yet so plenty to enjoy with the upgraded visuals (And then there's of course the jaw dropping Blood and Wine DLC🙌🏻)

Do you think the PS5 version will create a new trophy list?

I started the Game of the Year version on PS4 at least a year ago and stopped when rumours of a PS5 version started swirling around. I am curious if I'll end up with a different trophy list for this version or whether my progress on the PS4 list will continue?

Either way, I am really excited to play the game, it's utterly fantastic.