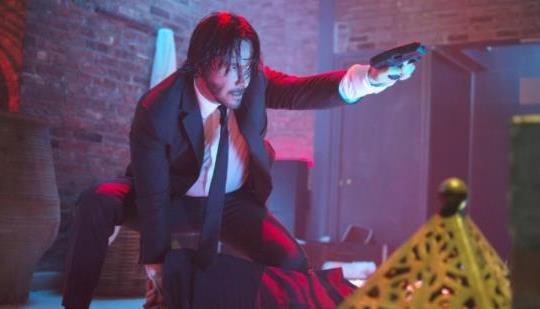 From IndieWire: "Lionsgate is flirting with the potential of a major video game based on the “John Wick” action franchise, the studio’s CEO let slip on Thursday.

During an earnings call with investors, Jon Feltheimer noted that Lionsgate execs have been “fielding proposals” for a big video game based on the Keanu Reeves movies. Despite his excitement at the idea, Feltheimer was hesitant to say much more about the early-stages project: “I don’t want to get ahead of myself here, but we believe there is a big AAA game to be made out of ‘John Wick.’ We have been fielding proposals. We certainly are interested in moving that forward, but I don’t want to say anything more about that at this time.”

Given that each of the three movies have been box-office hits — all featuring some of the most genre-defining, stylized action and gun-fu around — a sprawling action game seems like a natural fit for John Wick’s character and story. There already is a “John Wick” video game that exists, of course; Mike Bithell’s independent “John Wick Hex” which was released in 2020 and re-imagined the gunman’s fighting as a strategy game akin to gunfire chess. But Feltheimer mentioned a AAA game: something that would require a sizable budget, but that eager fans have been demanding for years."

Yes please. Maybe by the Hitman guys that are creating a James Bond game now.

I imagine a game like Max Payne or something, lol

My ideal John Wick game would be a combination of Max Payne and Sifu.. if that's even possible lol

This could be surreal. Make it happen please!