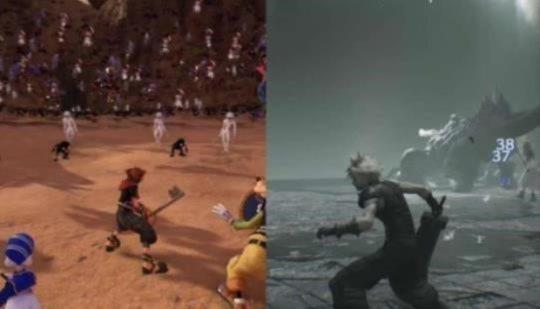 The 'Kingdom Hearts' team at Square Enix has been praised for its work on Final Fantasy XVI by producer Naoki Yoshida.

Love everything about 16 but combat is the only thing "im a bit worried, not a fan of super action game like DMC

This is brilliant news, i thought KH3 combat system was perfect.

This is bad. I liked kingdom hearts but id rather the old school battle systems in my ff. Damn young people. Well atleast according to square.

Accidently came across this

Reading through these comments makes me think its definitely the younger crowd that cries about turn based. This is from 2010 lol and alot of people were mad square wasnt releasing turn based. Catering to the 360 crowd and the west. Only difference i see these days is young people on here i have to assume.

Square shouldve stuck to being square instead of westernizing all their games. Glad indies still make turn based sea of stars and chained echoes are two of my most wanted games coming out. While ff16 ill grab for 15 at gamestop or ebay one day to atleast try.

"Square shouldve stuck to being square instead of westernizing all their games." YES. This is one of the saddest things about modern gaming for me. Squaresoft's old games were works of art. Indies are ok but it's impossible for them to reach the perfection of an industry-leading studio at their prime. FF XVI will probably be a good game, but we lost something great to get this style as its replacement.

I’m going to take a wait and see approach to this one. It’s going to be the first time I’m not preordering a Final Fantasy mainline game. Have Crises Core on preorder as I really want that steelbook and, well, you know what you getting with that game. Interestingly enough Dragon Quest XI sold really well for a turn based game but I think Squares decision was based on how well FFXV sold.

The head guy or one of them came out and said its the younger crowd which is why is action now. Its in my first post. I think dq11 is the best game theyve put out in years. Ff15 i bought it day one idk maybe cause the wait had me excited. Put 10 15 hours in d eh. Meanwhile i put in over 200 hours in dq11. Its not about the hours per say but just showing which game i liked better

Persona 5 proved that you can do turn-based and be successful in the 2020's.

Not at all enthused about 16 so far.

Will agree with you that p5 is a great example of turn based games can still be super successfully.

On the hand I'm super excited for ff16 it's looks awesome and the team behind it know what they are doing, my hopes are as a high for mainline ff as they have been since ffx

I definitely enjoyed P5:Rs combat and thought it fit very well but on the other hand I thought Persona 5: Strikers combat was awesome, very different from P5 but still true to the series.

So the wording (and probably translation) is a bit misleading. Nowhere in the article does it actually say the KH team helped in the development of FFXVI. What he said was more along the lines of the combat in the KH series helped INFORM the combat of FFXVI, but not that anyone from those teams actively helped in the making of the new FF. It was more like the FFXVI looked at those games, took inspiration from them, and applied what they learned from the new game. Yoshi P pretty much said the same thing before. They might have even pulled some people onto the project, but it's not like the KH actively participated as a whole on FFXVI.