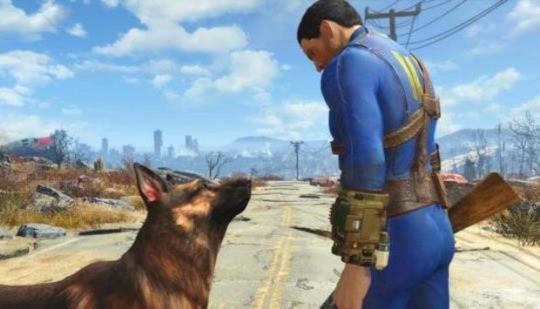 Fallout 4, the beloved apocalypse RPG game from Bethesda, is scheduled for an official next-gen update that will bring bug fixes and improved 4K performance

pcgamesn.com
Fallout 4 is getting a 4K upgrade on Series X|S, PS5, and PCknowtechie.comKnowTechie

Free update on all supported platforms, contrary to the perpetuation of certain False Narratives being rampantly spread about a publisher "taking games away".

How does an update to an already released game on said platforms relate to taking games away? Last I checked, Starfield isn't coming to PS systems and it was announced 3 years before the ink dried.

Can you “take away” a game that was never on a platform? Did Starfield get announced for PS and then dropped?

In 2018 Todd Howard revealed that Starfield would be for the next generation of consoles. Plural.

That included PS5 at the time.

Yes starfield was being released on ps console

The game was never officially announced for PS. However Sony was trying to get the game as timed exclusive until MS swooped in so it's Said to assume there 100% was a PS5 version.

An example of taking a game away that was originally multiplat would be Stellar Blade. That game was 100% multiplat until Sony paid to can the Xbox version. Sony doesn't even own the studio so that makes it worse.

At least here MS is keeping there word on supporting legacy titles.

If I remember right, Todd announced Starfield briefly and said it was still a few years away. He didn't mention any platforms. New consoles hadn't even been mentioned until Xbox announced Project Scarlett at E3 2019. There's no way a 3rd party was walking out on stage to announce new generation consoles were on the way.

Regardless, it doesn't even matter. If the game was never announced specifically for PS then the game technically can't be taken away. When Xbox bought Bethesda any game that had been announced for PS still continued to released on PS.

@ the deflecting of Starfield being on PS or not..

Obviously it was going to come to the platform with majority sales. Quit playing that game and just accept the obvious.

Please stop trying to fit this against a company trying to buy another publisher for 70 billion dollars and trying to make themselves look like the victims. So 2 trillion dollar company cannot compete against another company which is worth a fraction of that. And why you as a gamer are supporting anything like that how does this help you in any way

Lol but the 2 trillion dollar company is competing, hence the acquisition. If you were MS what would you do? Truly

Invest in new franchises or abandoned IPs with potential from defunct studios. 70 billion could build you new studios in Japan and they can build everything from a top MMO like FF14 to a new fighting game that could challenge Street Fighter or Tekken

Not that I disapprove Microsoft's acquisition. If both Activision and MS came to the agreement and has legal approval, then by all means go for it. I'm not in favor of Sony's deals with Square Enix for FF16 but I can't do much about it except boycott.

@ TheColbertinator, appreciate the response. I agree with you that they could do all those things. The issue for them is that those things take far longer that buying companies that are already online. I also would offer that MS messed up, they dropped the ball hard. The acquisitions are a result of needing to catch up and needing to do so quickly. That said, if a company wants to be sold and is asking for MS to acquire them….. just failing to understand how they’re evil because of this. Not that you’re saying this but the sentiment around these parts.

" I also would offer that MS messed up, they dropped the ball hard. The acquisitions are a result of needing to catch up and needing to do so quickly. "
That's them not being able to compete

I would fund many IP's that haven't received my attention

I would fund legacy of kain, time splitters, ominusha

@FGHFGHFGH, huh? No… since when does an error equate to not being able to do something? We’ve seen Xbox compete before and we’re seeing it again now. I think that folks that are staking their lives on the failure of Xbox are in for a bad gen lol Get both consoles if you can and just be happy. I love that my backlog right now is FH5 and Ghost of Tsushima

I dunno if that's 100% true because Psychonaughts 2 doesn't have a PS5 update, patch or anything. Unless Sony gives MS for it, Sony obviously doesn't care enough about the game.

There would be a contract saying that whatever game Bethesda updates will have to update on PS. I don't think anything like that exist. What does exist is games like Deathloop and Ghost Wire have to hit Premium day and date it hits gamepass. Contracts, legalities etc is all messy and confusing. It's all going to get more confusing as Sony and MS continue to buy up more studios/publishers.

“Free update on all supported platforms, contrary to the perpetuation of certain False Narratives being rampantly spread about a publisher "taking games away".

They took Starfield and ES6 away no?

Can you imagine MS not including playstation in this while they are fighting to get their deal approved?

That doesnt even make sense taco. Its an update. Not a game or games that were multi platform.

can we not?
also, releasing a free update to a already existing game is not the same as bring exclusive to some platform. dont delude yourself.

I'm assuming that's next but since frame rate impacted the core game so much on PC it's probably harder allegedly the frame rate tied into gamespeed and physics for the PC originally that's not a problem in 4.

Also next gen updates have been a roadmap item since the consoles launched.

The update I've been waiting my whole life...

Worth another play through then

Awful game getting an update.

Fallout 4 was the only game in the series I couldn't get into. I might give this another go after the update.

It was very disappointing. It didn’t progress just had slightly better graphics and the stupid base building .

Nice, F4 was good and a free next-gen upgrade is always welcome.

I keep reading how Starfield and Elder Scrolls VI was taken away. How can it be taken away when it was never released? Just because it was announced doesn’t mean it gets released whether they shut it down for one reason or another. Yes, they bought them out and made it exclusive, but it was their right to after gaining control of the company. Just like any company does when they buy a studio or publisher. Keep it on your own or sell to the whole.

Let's be honest, every single Bethesda game launched on every platform they could possibly support when they were their own company. Perhaps timed exclusivity, but would ultimately end up everywhere that was capable enough to support it. If MS never came into the picture, there's zero doubt in anyone's mind that those games would go to all platforms.

Now, under MS, they are no longer coming to one specific platform. I mean, I don't entirely know how anyone can argue that games weren't taken away. It isn't like MS said "release it on whatever you want" and Bethesda chose to cut PS out of the picture. Announced or not doesn't have much to do with it, in my book.

That said, doesn't affect me. I'd have played it on PC either way. But it is crazy how many big, historically multiplatform games became/will become "exclusive for anything other than PS" after the acquisition.

Again, it still doesn't matter. Never count your chickens until they are hatched. It's their call whether or not they want to make each franchise multiplat or not. They choose not to for those two franchises. Sucks for the people that choose to be one console holder or not on a PC. If MS wants to eat that development cost by holding it back then that's their call (I don't support it). I'm sick of exclusives in this day and age with the systems so similar that there is no reason to not port them over to each other. Sure make them all timed if anything for 1st party studios for a year, then after a year is up, have them release day and date on the 1-year mark on the other consoles.

That's great in all but what I really want is fallout 4 in vr. Hoping fallout 4 gets a vr update for the psvr2 that be epic

There's no incentive for MS to do this, unless Sony coughs up some money to port it over.

Oh cool PS5 update included. Loved Fallout 4 so this is a nice surprise. Now if they can release fallout 4 vr for psvr would be nice.

I'm betting that this update will screw mods like de ae of Skyrim did.

this is more "hey the Fallout 5 is like 3-4 years away, here's the old one revamped to keep you warm until then!"

Turning Back Time: 25 Years Of Fallout And Looking To The Future