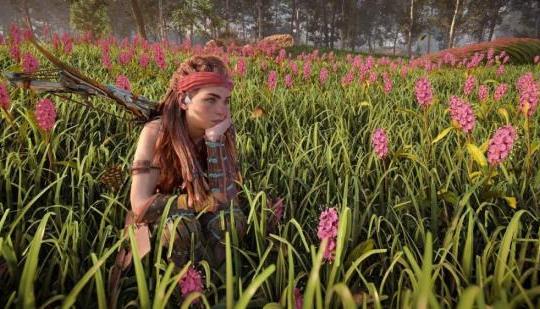 Decima is Guerrilla Games' in-house engine, first used to make the PS4 launch title Killzone: Shadow Fall, and later used for games including Horizon Zero Dawn, Until Dawn, and Death Stranding. An updated version of the engine was used to develop Horizon Forbidden West, and it's now being used by multiple PlayStation studios for upcoming games.

Looking at Horizon Forbidden West, that could be great news.

As long as they don't go too crazy with the bounciness of the hair. It's so distracting.

Lol yes. Aloy should feature in hair product advertisements. Many women would kill for that bounce.

Pretty gorgeous game in every other regard.

Hair Salon Simulator, for if Decima ever gets extended to indie studios.

Hair freaking out and heavy use of edge lighting from non-existent light sources bugged me quite a bit.

No one else releases at that quality and frequency.

Decimal is actually the KillZone engine. Greatly modified and enhanced of course. I would love to see a new KillZone type game with this version of the the engine.

Makes sense, standardize upon one internal engine across all your studios as best you can. Also avoids giving money to Epic for UE.

I always thought the ND engine titles looked better than Decima titles though, but perhaps that engine is less flexible than Decima.

Naughty Dog uses some dark magic with their engine. Only explanation there can be, lol. But yeah, I'd gather that it's not really built for open worlds. Decima still looks incredible though. Excited to see what different studios will utilize it, and what type of games they'll be working on.

Lost Legacy had a pretty open area that was big. Seemed to handle it pretty well.

I often wondered why that didnt happen more often. Meaning using an in house engine from one of the other studios across the board but instead some teams opt to use external ones like ID Tech and UE. Now that MS owns ID and their engine... they still will be using UE for some games. You'd think it would save them development costs by not having to pay for the license to use UE but ... it is what it is.

There's a few things at play there typically:

1. If a studio already has experience and tech/tools built up around UE (think Coalition), the cost to migrate to ID's engine may be very high.

2. Most engines aren't as flexible as Unity and Unreal, in the sense that they were made for a shooter game, have ~20 years of shooter game feature development and therefore aren't suitable for say a racing game or open world game. You could develop the engine into something as extensible as Unreal, but that may be a much bigger investment than just paying Epic.

It's also pretty hard to replicate what UE is doing, and at the pace at which they're doing it, UE is very far ahead of any other engine in the market with things like Nanite and Lumen - and they get ahead of others pretty quickly due to the amount of resources they can dedicate just to engine development - since they are selling their engine unlike Sony/MS studios.

So it'll kinda depend on a per-game and per-studio basis I'd say, across both Sony & MS.

Sony & MS using UE is kinda ironic though, because while Epic may not be a direct competitor to Sony & MS in the console/HW space, they are sort of funding a current/future key competitor indirectly (Tencent).

Takes a lot of time and money for a dev to learn a new engine. If it's an in-house engine then getting developers from outside your ecosystem have that learning curve to deal with which slows down development.

Yeah, but that's actually nothing in the grand scheme of things. Sony has about 4% of Epic, Tencent has 40%.

Also, even as an investor, they still need to pay licensing fees for UE.

Doesn't mean their studios have to use nothing but UE.
Days Gone used UE4 by the way.

Decima is a beast of an engine.

Sorry but those 10fps waves look AWFUL. Once you see it you can't unsee it.

Oddly, it didn't look like that the last time I played it, maybe they broke them in a patch.

Amazing engine! Can’t wait to see what other do with it.

Sony studios have quite a few proprietary game engines including those from Naughty Dog, Guerilla Games, Insomniac Games, Sucker Punch, and Bluepoint Games. So there’s always a great variety in game designs.

It always baffled me why nearly Microsoft studios use Unreal and not make their own proprietary engines. The only decent proprietary engine is ForzaTech. And there’s rumors it’s struggling to deliver with Fable. Slipspace was also a failure.

ApocalypseShadow54d ago (Edited 54d ago )

Sony has so many powerful in-house game engines to choose from. That comes from years of hard work and building over time. That's only a good thing. If some of the teams use Decima, we know the looks of a game are pretty much in the bag.

The internal sharing of knowledge is what throws it over the top. Sony was very smart on that.

Came with a lot of growing pains but it paid off. Their most popular studios today went from PS2 to developing exclusively on PS3, producing masterful games today as a result.

Though, I do remember GoW2 releasing as a PS2 exclusive after the launch of the PS3. But GoW3 was the most graphically impressive game on PS3 as a result. Hard to criticize Sony Santa Monica’s output now.

That would work perfectly .

Its a flexible engine, they made a linear game like Killzone and then Horizon which is open world, and Death Stranding was also made with it. All 3 games look vastly different and do different things, don't think it'll have much issues like how Frostbite was having

Frostbite was crap on Need For Speed it looked great and very cinematic but the input latency are high and games tend to looked the same as evidenced by the likes of The Run and Rivals I thought they both looked like flashy BF3 do street racing.

Hopefully by choice and not forced like EA with Frostbite

PlayStation studios be some of the main companies to push hardware that’s wassup Ubisoft, Activision, EA, cd project, new rockstar should take notes of this

Well considering it's by far one of if not the best looking open world game I'm sure they could push it even further in more linear games.

Well how about using that engine to bring back Socom, Killzone, Resistance..

Sony could sure use some FPS and TPS right now.

They need one next Christmas when there is no cod because apparently they are skipping a year . Would be perfect timing for a new shooter to come along.

At least they're not using ue5 for a change...

Hopefully they all get their 60 fps modes done correctly right out the gate. Forbidden West was UUUUUGLY at launch.