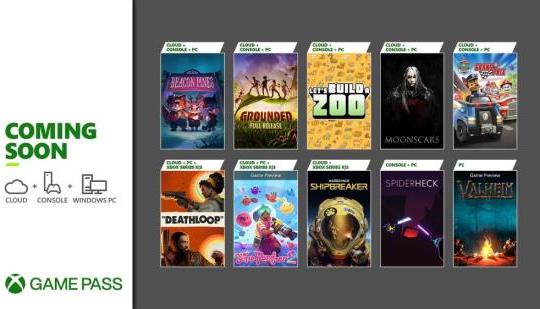 From Xbox Wire: "We’re back to bring you a bunch of games to close out your September. In case you missed the Tokyo Game Show, we even dropped a few games you can play right now! Let’s look at the games coming soon and updates you can check out right now."

September has been an insane month for Game Pass, and what's even crazier is October is looking to surpass it.

The best deal in gaming it still delivering.

You may not want to look at PlayStation's September line up. More for less

Lets hope this is sarcasm....

I have GP and I have PS Premium and for me Premium was a waste of money. I do buy all of Sonys exclusives so that alone devalues Premium for me.

Just out of curiosity, why did you bring up PS in this piece?

Not sarcastic this time: https://www.theloadout.com/...
It's got Death Loop and lots more for September
@darth I'm comparing due to the best deal in gaming comment

Deathloop (Day 1 Xbox release on GamePass, Day 371 on PS+)
Assassin’s Creed Origins (PS4) (GamePass just added AC: Odyssey 6 days ago while AC: Origins been on GP since June '22)
Watch Dogs 2 (on Game Pass since July '22)
Dragon Ball Xenoverse 2 (Dragon Ball fighterz been on Game Pass awhile and much better DB game)
Spiritfarer: Farewell Edition (Spiritfarer left Game Pass in August after being on the service for some time)
Chicory: A Colourful Tale (got me there... never heard of it)
Monster Energy Supercross – The Official Videogame 5 (sure Energy Drinkers around the world are thrilled 1.4 user score on PS4... ouch)
Alex Kidd In Miracle World DX (meh... another game you got me on... haven't heard a thing)
Rabbids Invasion: The Interactive TV Show (hey look... a quality title for the PS4. does it even play on PS5?)
I am getting bored now... how many of the games are actually playable on your PS5? Which are available to Premium only? Call me when Sony gets their stuff sorted out. It is embarrassing.

Calling Deathloop a day 1 title is a stretch.

Valheim is a gem. Don't sleep on it.

Why write Xbox GamePass and then include a game in the title that is not for Xbox GamePass, but for GamePass Ultimate?
I was so happy to see Valheim here, and realised it's just for PC, a game I bought al.ost 2 years ago.

But GamePas äs Ultimate is them all, right? That's what I've got, and it gives med GamePass and GamePass PC.

The Xbox GamePass did fool med badly.
I've been longing for the Valheim console release.

@MrNinosan: Correct. Ultimate is everything, including the GWG stuff.

Out of the 10 shown I'm only interested in the Indie "Moonscar" I played Deathloop last year when it was released on the PS5. The interesting Indie game/shooter Prodeus is also releasing on GP this Friday but failed to be mentioned in the article.

Prodeus is close to great, but it's ruined its checkpoint system. In Prodeus you get rewarded for failing. When your health reaches 0, it goes back up to 100 while killed enemies remain killed. Dunno why they chose to do this in an otherwise potentially excellent game.

Hope someone finds a way to mod a proper checkpoint system into the game, should be fairly simple to do.

I'm getting Prodeus for Switch. Been waiting forever for it to release.

Love Valhiem. Wish they would invest in the small team and help surprise release it as a console early access exclusive though.

I'll have to play Let's Build A Zoo

Good to see the games are picking up again.

Wow what a lineup! I fail to understand why people still find fault in game pass, Devs clearly see the appeal, Xbox and PC players also. Can point to where the hate is coming from though 😂

I Fail to see why they are announcing Grounded for Gamepass when it's already available as an early access title.
Sure it's an official release as a purchasable one but it's not a new game for Game pass, just an update.

Valheim devs want to make a sequel, but one idea has already been vetoed