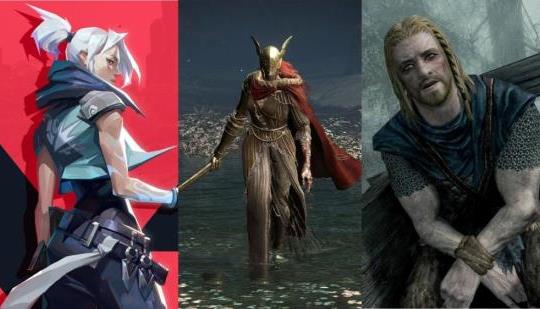 Summer 2022 has been a quieter period for big video game releases. But, that doesn't mean there aren't games to play during this dry season.

Adhttps://www.releases.com/?utm_source=n4g&utm_medium=native&utm_campaign=c1
- Comments (54)+ Comments (54)
TopNewestOldest
Expand all
The story is too old to be commented.

Personally it's been a "dry season" since R&C released. Nothing else has really made me excited to return to it every day since i beat that game unfortunately. Only games i'm actually excited for are Calisto Protocol, Evil West, Spider-Man 2, Max Payne 1&2 Remake, and a few other maybes

Everything else just seems to be GAAS dribble, or soulless, disappointing garbage.

I can't wait for Callisto. Really hoping it doesn't get a last minute delay - pretty close to EOY.

Callisto and Ragnarok are my most looked forward to games for sure. Also really excited for Atomic Heart, Spider-Man 2, Dead Space Remake, Last of Us Factions, and others.

I understand that game will be great, but same as the previous GoW, i just want Santa Monica to do something else. Just a personal opinion, but them being literally the largest studio Sony has, i'm just kinda done with it being used for only 20+yrs of GoW. And that's all that'll be in my head when i play it honestly. No shade to those that will love it, just me.

Soooooo you're tired of God of War, want them to do something different (which technically they did by revamping the series a bit).....but yet the only game that's excited you in the past 2 years was Ratchet and Clank which has released like nearly 15 games in the past 20 years. And the most recent iteration, while beautiful and played great, they overhyped the new "rift" system and it was more or less a R&C game at it's core. I loved it, not complaining, but I wouldn't exactly call it super original.

And the only thing exciting you for the future is a Spider Man sequel (3rd in series) that probably won't be incredibly far from the predecessors, Calisto Protocol which is essentially a Dead Space re-imagined, and a remake of a series.

I don't know, while everyone is certainly entitled to their own opinion, I feel like you coming on here complaining about a dry season, the only game you liked the past two years was a recycled idea, then saying you're only excited for essentially recycled ideas, and to top if off you want arguably the best studio in the industry to stop making a certain series, fresh off one of the greatest games of all time, because it will "be on my mind while playing it", just seems completely silly.

Insomniac have done plenty of other things other than R&C tho, and none of what you trying to suggest is even remotely the same thing. 3 games (actually 2 games and a stand alone expansion) while also releasing other games in between is not the same as 6 games, 8 games if you count the PSP games, all the same series. Neither is a remake from a studio that has released several completely different games since working on Max Payne, and again 4 games is not the same as 8 games if you really want to include Calisto Protocol as part of the dead space lineage (which is dumb). All these studios have done other things, and/or haven't dragged it on for 20yrs. My gripe isnt "recycled ideas" dont know where you got that. I just want to see them do something different

Which platform are we talking about? One has games you can buy all the time and play and had 2022 releases. Has even more games with an adapter and a VR headset. Plenty games there. Has one big game coming real, real soon. One has delays and no releases for the year. Has had developers before the huge buyouts and after but still no releases.

I know which system you'll have plenty from first and third parties to choose from without a need of a subscription or going back to play BC games.

Dude, you're trying too hard.

You should know by now. Shadow never misses a chance to throw shade at MS / XB. To be honest, his disdain is rather unhealthy. I've never seen anyone hold a grudge like shadow.

No. But it will work on my PS5 (and eventually PC).

Is this yet another faux account account I need to report, you freaking weirdo? Like dude, you're legitimately reaching stalker levels at this point. These are videogames, dude. F-ing grow up.

Maybe a platform that makes all other platforms pale in comparison with the amount of releases it gets.

Maybe its just me but I never have a dry spell. I always have something to play.

Exactly. It's been dry for new games on every platform, but that just means I finally have time to work through a huge backlog of tens of games.

Nintendo and sony are doing just fine this year in terms of supplementing 1st party games with all the 3rd party games.

@Flawless It's been 6 months since the last 1st party game on PS, if that isn't a dry spell, I don't know what is.

@XBladeTeddy Agreed. They've had a steady stream of content, just nothing huge like a Mario Oddysey (for me at least).

@flawless
A dry spell is a few months of slow times. So Sony and Nintendo experience that here and there, especially during the beginning of a Gen. Dry spell isn't the right word for MS though, by the time you reach decade(s) you've definitely necessitated a new term altogether

Same here. For every game I complete, there's 12 more on my wishlist and new games being announced every week. I've literally never run out of games to play. I think gamers need to go outside of their comfort zone and start playing different genres.

How about my giant backlog. Got so many games left to finish plus modded versions of my favourites.

Edit: Ok just reacted to the title, they actually start the article with tackling the backlog. My bad.

Well when there is a dry season i'll get some games that i didn't want to get at launch that are finally on sale(Neo:the world ends with you recently), go through my psplus list to see if there is a game i am in the mood to play now(big list as i have been on ps+ since the ps4 came out) or look at the games that i have bought that i replay on a regular basis (Dead Spaces, Resident Evils, Final Fantasies, Returnal)

Currently doing my God of War replay in preparation for Ragnarok as i just finished Soul Hackers 2 and the next new game is Plague Tale 2.

The is no dry spell; there's always something to buy or play.

Dry season... I have so much stuff to play.

There is never a dry season for me. I play Guild Wars 2, been there since first beta and in MMO's there is always something to do or going on. I also play Paladins, which is always fun. Now currently playing Spider-Man on PC, and Xenoblade Chronicles 2 on Switch at work 😊

The thousands of games in our backlogs.

Dry season its been a dry few years.

The last major release I played was probably halo infinite and before that ratchet and clank.

This whole generation had been a slow trickle of next gen updates and even slower trickle of full next gen games.

Destiny 2 raids and PVP along with Virtua Fighter 5 rerelease have kept me going. Might get back into Cyber Punk.

I have more games than I can play before I die even without two sub services asking for my time.

I could play Resident Evil games over and over and never get tired. So there’s never a dry spell for me.

Inscryption. Best game I have played all year. I’m m amazed nobody is talking about it honestly. Well worth the 20 dollar price
Tag.

Hasn't been dry for me. Xenoblade Chronicles 3 and Soul Hackers 2 have kept me occupied fully.

high on life, atomic heart, ragnarok and callisto can save this year

I dont understand the save part, sure itll top off the year on a great note but its been a great yr so far.

Thats just off the top of my head and my fav games for the year so far, i dont think yhe year need saving but the 4 games you mentioned will make it better.

2022 didnt turn out like we thought it will be... i thought this will be the year ''next gen'' shines but it real quite year the games you montioned are good but none was wow for me and very few that you had to include a remaster in the list

I agree with you for the most part but still a great yr, much better than last year thats for sure.

But i am dead sick of still seeing titles be cross gen.

And its a remake not a remaster there is a clear difference as apposed to just a simple upres and fpa boost.

Add in the games i mentioned and the 4 you did and thats a great yr for gaming.

i dont know man seem like a money grab t
o me not much difference from remaster ....not buying it...not for 70$ i can wait for ps plus release
for cross gen yes it sucks its feels like we still in last gen! and what more irritating is the delays !!! 60% of 2022 games was delayed !!! whats happening in gaming industry...
Hogwarts Legacy
Marvel's Midnight Suns
Avatar: Frontiers of Pandora
Replaced
Starfield
Redfall
The Legend of Zelda sequel
Suicide Squad
STALKER 2
Forspoken

I'm playing RimWorld on PS5 rn. It's so addictive. I love it. It's simplistic and complex at the same time. I haven't been able to get into one of these kinds of games in a long time.

I would recommend for those who haven't played Elder Scrolls Online or those who haven't tried the free current gen upgrade--the game is soooo much better than it used to be. I just gave my friend (who loves GTA V) a tour of the game and his mind was blown.

The newest expansion High Isle is literally the high point of the series and just released this year. The game is in its absolute prime right now despite being eight years old and you can get a copy of the game and the expansions on eBay for cheap. And you don't need a subscription to play or win. The stories, and the acting are superb. Laura Bailey (semi-famous video game voice actress) plays a key character in High Isle. Zenimax even hired Billy Boyd (the LOTR actor who played pippen) to play one of the new characters.

No such thing as a dry season for me. I have tons of games I’ve never even started. Especially with so many games getting updates to frame rates and stuff like that. I have red dead redemption two and still haven’t touched it waiting on 60 frames per second

Haven’t been dry to me I played the 2nd judgement game for the first time and it really did surprise me how well made and lived in it feels, I also been playing Witcher 3, horizon forbidden west, dying light 2, saints row 3 remastered, Lego city undercover, watchdogs 1&2 I have been enjoying them all and accepting them for what they are

I really do dislike that everything releases in blocks like it does, so much comes out at the end of the year, while right now you could release one and it would sell like hot cakes

10 Most Hated Enemies in Elden Ring