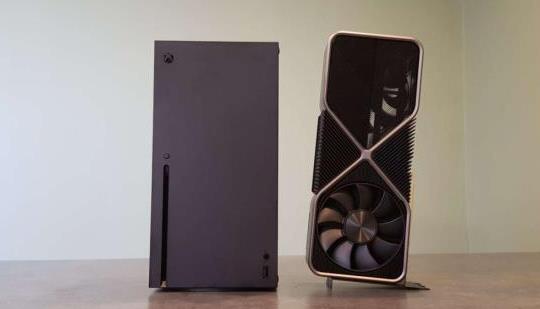 Though CEO Huang states that without the cryptocurrency boom the GeForce price "mix would go down."

What a scumbag! So the price of the hardware has no relevance to cost. Just a notion that if customers are willing to pay this much for a system that plays games then we should charge that amount for a component that allows a complete system to play games.

I personally think you are interpreting it backward, rather, he's suggesting targeting console prices should be their aim, to remain competitive and compete on value proposition.

Read the article or his statement.

I have, why I question your interpretation of it.

Of course they're funding advancements with R&D etc, that's what their business does. They then sell those advancements for massive profit to companies like Microsoft, Nintendo and Sony. Not really sure what point you're making here.

Bro every company in the world has to deal with costs relating to researching and manufacturing a product that goes to market.

They are guaranteeing their cards are going to an end user the moment they are complete by working with console makers. If partnering with Nintendo, Sony and Microsoft is such a burden and not profitable, they wouldn’t even do it.

You turning them into a victim because they have deals with the console makers and they have to research and develop for them (which they do anyway with PC hardware) is kind of laughable.

The video game console comes complete out of the box.
The GPU requires the rest of the PC in order to be used.

I thought the same. This guy is either playing dumb or he thinks dumb of pc builders. Whichever the case, he was, is, and always will be an a hole.

I think the idea is that you need a PC anyway, so the cost of the video card is the cost to make your PC a gaming PC. You can buy a MacBook and a $400 PS5 digital or you can buy a PC box and a $400 graphics card. That’s how PC graphics makers think are staying competitive with console.

Correct. Why would I replace one part of a pc when I can get all new and updated hardware for the same price in a console.

Depends how old the current consoles are? A PS4 may have competed with PCs when the PS4 was new, but then you had to put up with slow loading times and low framerates for years whereas PC gamers have a lot more opportunities to upgrade to the latest when it's convenient to them. I bought a PS4 but rarely used it because the loading times were insane compared to my PC full of SSDs. I tend to upgrade to upgrade a GPU every 2-3 years and PC every 5-6 years.

Do what you want. AMD can always counter-balance and with Intel pushing into the GPU market prices are always going to be competitive.

Nah, AMD and Nvidia have both failed in the low end because why sell low margin cards when there is a chip shortage and you can't meet the demand for high end cards. Same thing the car industry is doing, as soon as supply is limited they make less budget options as they don't want to cut into their own profits.

Exactly. People CAN'T think AMD launching the terrible RX 6400 and RX 6500 were a sloppy, but merciful act towards the low end budget market. It was literally stuck inventory of RDNA2 from notebook that OEMs didn't want, so they stuck in a PCI board and sell it was a discrete card.
About Nvidia and the low-end, it is so neglected that you don't even have what to talk about.

Intel has a lot of work to do. They keep delaying their full GPU launch, and at this point, they're launching with performance around an RTX 3070 with unproven driver support. Meanwhile NVIDIA are releasing their RTX 4000 likely before Intel, and AMD is coming right after with RX 7000.

On top of that the used market is starting to balance out again, putting more hurt on Intel (used RTX 2060s are $200 and sometimes less, and everything else is slowly falling in line.). And AMD is having price drops across the board and their GPUs (6600 / 6600XT especially) are strong buys at their current price and will be hugely competitive with whatever Intel has.

On the flip side AMD AMD is happy with getting the extra profits right alongside NVIDIA, and will happily launch their GPU prices right up there with NVIDIA and then adjust according later.

Everything is going up due to global greed, and this mentality of corporation > the individual / people.

It's not that ridiculous of a comment if you're a PC gamer.
Unless you're building a brand new PC from the ground up, thus spending about a grand to outperform whatever console is at the time, you don't need to replace most other parts too often; and the GPU is pretty much the most important element.

An i5 processor still holds up to this day, if talking about gaming.

Except you don't need a grand to outperform a console. 3060Ti is better/same as the consoles and less than 400, 3080 is certainly better and launched at 650 (if you could get one in the huge rush) and 4080 will likely be far ahead roughly in the 80% or so range more powerful than the consoles.

You still end up needing about a grand for a whole new PC build, which was my point.

I have a 3080 build, and it runs circles around the consoles out now.
But if I were building something from scratch around it, it would be about a grand or so.

I kind of agree with this statement. The gpu does most of the heavy lifting in a pc. Whether you build it or buy a complete pc. The gpu is a critical component. Cpu is second. A powerful cpu would not be enough to run a game at max. But a powerful gpu with a weak cpu can still perform at acceptable levels. So yeah I agree.

That's just stupid. A console is a complete system. A GPU is just one component. If a GPU costs the same as a full system/console it damn well better absolutely smoke that console's performance assuming similar specs on the rig it is installed on. I'm talking total obliteration.

This is just Nvidia trying to justify a fat margin. Consoles are often sold at little to no margin.

then provide it as an APU+system-memory+enclosure+ss d etc.

This is what you get in a premium marketplace, unfortunatetly the fact that people have been coughing up the money for high end GPU's over £1000 they know people will pay whatever they ask for, this has been the same for years and why I can't justify keeping up with the jones' on the PC hardware space. Too expensive, too fast moving, too greedy.

Lol what a douche bag! How can you even compare that. Nvidia can suck it!

I didn't read the article because the title its stupid, because the average Gpu prices are much more expensive than a console. I could agree with the title if they sold a 3090 for the price of a ps5

But then I'm at the mercy of only one storefront, games cost $70, I need to pay to upgrade my older titles, and I need to pay just to play multiplayer.

How much am I actually saving, every gen, to play games. All the while not not also having a PC and everything that offers?

You also don't need to spend $1500 to build a PC that runs circles on the PS5 and even Series X.

Imo why even say this because gpu is a component while a console is a complete product.

Maybe the ray tracing is not as good but really who cares it's still insanely good.

And as far as regular graphics processing it's literally on par so there's no loss there.

Nvidia did a so dirty by pumping it so many cards that it were just prices to satisfy the mining craze.

They can rot in hell now

Funny I don't remember ever paying near £800 or over £1000 for my consoles when a Nvidia GPU could cost that much or maybe even more also if he beleived that then why are AMD always cheaper & sometimes closer to Console priuces than Nvidia.

The high end Nvidia GPUs are usually made for workstation use.
The 3090 is twice the price of the 3080, but only offer 10%, at best, actual game performance boost.

Splinter Cell is back... as an 8-part BBC Radio 4 drama