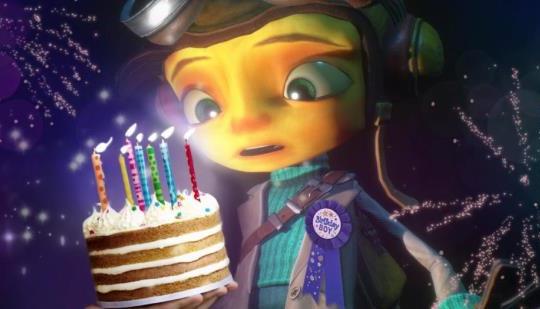 One Year Of Psychonauts 2

"It's a cliche to say that "time flies" but phrases become cliche for a reason. One day, when I was eleven years old and playing my Dreamcast, I blinked and suddenly it's 2022. Not so long ago but still "half a decade ago," Psychonauts 2 moves from a flittering idea in Tim's mind to something that could actually be funded and made. And now, in an even faster blink, Raz's latest adventure has been out for an entire year. That's one year of dental doors, fan theories confirmed or denied, speedruns sprinted, patches added, languages supported, and memories made.

When the Psychonauts 2 Fig campaign was announced at the Game Awards 2015, there was no guarantee that the target would be met. Crowd-funding is a dice roll in many ways (both for the creatives and the backers) where you could blow things out of the water or fizzle tragically right before the finish line. Either way, you take the shot and see what happens. Thanks to the help of 24,109 amazingly enthusiastic and vibrant fans, Psychonauts 2 would become a reality."

It feels like this game was out way over a year ago. Time does indeed fly.

Still one of the best games of recent times - the original even holds up great!

Definitely one of my favorite games this gen. There’s a ton of variety in level designs and a lot of personality in the characters. It’s a fun and enjoyable experience overall.

Really hope this comes to PS+/extra

Never going to happen.
The fact it even came to PlayStation to begin with was because Microsoft honored Kickstarter obligations prior to DoubleFine being acquired.
The game didn't even get the next gen update that they did with Xbox.

That would be nice.

Psychonauts was very creative, but had some frustrating elements. I refuse to play 2 until I finish the first, which has been pushed aside for other games… the level with the crazy townsfolk and Godzilla are amazing, but the small things are holding the original back for me. (8/10 thus far, collecting those trinkets suck since they move in a 2d linear fashion)

i can't wait to get physical editions for both xbox and playstation. awesome game

are you buying from amazon too?

sorry for late reply but yes. amazon preorder the moment it went live. So glad it is getting a physical release.

Love the game but I need to finish it. For people to say Xbox has no games I have a hard time finishing games because Gamepass keeps throwing up new stuff I want to check out. Then I get sidetracked with a PS exclusive and then Nintendo drops Xenoblade on me. Freaking overload.

Amazon Slashes Up To 73% Off On Several Action Adventure, RPG & Simulation Games

Psychonauts 2 Gets A Collectors Edition