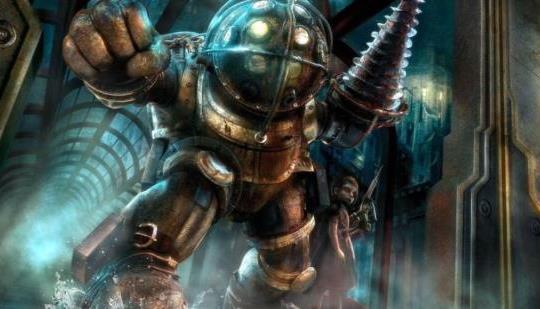 15 Years Later, BioShock Is Still Worth Diving Into

15 years ago, the gaming world wasn’t quite ready for BioShock when Andrew Ryan invited us to his underwater vision, Rapture.

Worth diving into? 15 years later it’s still the GOAT.

I still remember getting my collector's edition and the drill bit on the Big Daddy was broken. Was well annoyed. I don't think anyone got their collector editions intact, there was a big thing about it.

The delivery services were trash even back then. I can’t ever get a game or movie that isn’t shaking around in the case. Or a steelbook that isn’t damaged to shit. That’s what happens when people are in a rush to get rid of brick and mortar stores. Damaged goods like the usps.

The tip of mine was broken as well. Luckily, it was a clean break and I glued it back on and you can't even tell. Still have it on display with the box. I also have the extremely Limited Xbox 360 faceplate next to it, even though I no longer have a 360.

It's a very unpopular opinion but for me BioShock infinite was infinitely more fun than the original BioShock. The puzzles in the original Bioshock completely sucked that's why they're reworked them in BioShock 2

We are just talking about gameplay than infinite was just so much more fun to play but no doubt the setting and the atmosphere was better in the original. GOAT word is thrown around way too much along with best game ever

RDR to me was the perfect game along with TLOU but both of the sequels took the fun out of the games and went for pure and chore like realism especially RDR2. Developers should never force us to play their way and instead give multiple options

I miss the days when very few games used to get 10 out of 10 and that honor was truly reserved for The Best of the Best of the Best. Now 9/10 id expected of every big game and 8.5 is normal so 10/10 has lost its appeal

And I believe the big part of that problem is the gamers of today because to them anything below a 8.5 is a bad game if you go back to the 5th 6th and 7th generation there were many amazing games that got under eight interview scores but were so much fun to play

I definitely agree, to me Bioshock Infinite is better in every way, gameplay, story, setting. Rapture got repetitive really fast, my favorite part was freeing the sisters, but it was just the same thing over and over and became boring. I don't remember all the story details, but that "crazy" plot twist was pretty cliche, good guy turning out to be bad... "would you kindly" was kinda cool. Imo Infinite's twist was much deeper and better presented. Gameplay is also quite outdated.

It’s okay to be wrong sometimes. I forgive you, sir.

Not really. I started it a few month ago and gave it up. It's a pretty game for sure and the setting is fantastic, and the world story and setting alone is worth at least One playthrough. Even for the main story as well I think. But the game itself is just too simplistic and shallow. As an FPS there are far better games out there and as an example of Emergent Gameplay this is bottom of the barrel. Instead Deus Ex, Prey, Thief, System Shock 1 & 2, Hitman, Dishonored are far more interesting to revisit than this series. And if you want to revisit this series as an FPS then BIOSHOCK 3 at least got the better and faster gameplay out of all three. Even Bioshock 2 would be a better proposition for this.

Bioshock is in this place where it does nothing particularly well in the gameplay department. Basically just a jack of all trades type of game. It's just too shallow and simplistic for its own good. I see it as nothing more than a gorgeous and amusing footnote in gaming history.

But I still think that for at least one playthrough it's absolutely worth it.

Bottom of the barrel? Really?Nothing about those games is bottom of the barrel. The story, gameplay, characters, aesthetic was and still is incredible. Amazing series, loved it. You're certainly in the minority on how you feel about the game.

As I said, the main story is fine for a playthrough and the Background story is actually pretty interesting and enjoyable. And I love the Aesthetics of the game. They are tops in my book.

Is the gameplay department where Bioshock falls short for me. When it comes to the Emergent side the Bioshock series IS bottom of the barrel. This game has nothing when it comes to the creativity exhibit by the Thief, Hitman, Dishonored, or Deus Ex series. And it's also nowhere near Prey. Even System Shock 1 and especially 2 are far superior in this department. If under the FPS category then Bioshock 3 is where you want to start as is the best of the three in this type of gameplay. Then Bioshock 2. In the end Bioshock is way too rigid and shallow with it's gameplay, ideas and path progression to be called incredible. Fun in short burst but unremarkable.

I personally enjoyed myself with the first two games and really disliked the third one. Again, I'm not saying Bioshock sucks, just that it's nowhere near as good as people claim it to be. Especially when compared to the best the genre has to offer. The games that came before and after in this type of Emergent gameplay genre did it much MUCH better. Bioshock is simply just an ok game with amazing aesthetics. Nothing wrong with that. Just don't call it a classic cuz it ain't.

I love how to write articles journalists keep pushing the idea that games have an expiration date, "is it worth it to play X in 2022" a good game is a good game, especially when you are talking about single player games that don't have barriers like a multiplayer games having low player base after years or servers getting less care

First game was really fun and weird I enjoyed it . 2nd game was a quick reskin to make money but still decent. Infinite was hard for me to get into didn’t have the same feel imo.

I play games much older than Bioshock from time to time. Whatever you want to play is still worth playing . If it’s Pong and you love it it’s worth playing now .

Love this series and the first game is iconic.

Worth diving into are you nuts? It is worth diving into probably one of my favorite franchises that has ever came about next to ME and Dead Space. Each Bioshock game is unique in its own way my favorite will be Infinite. I just wish they would hurry up and push out a new sequel, prequel, remake, or remaster. I own all three on PS3 and rebought them on PS4.

I remember downloading the demo before it came out on my 360. It was essentially the opening segement....I went and pre-ordered it the next day at Gamestop. I don't know if a game, outside maybe Mass Effect 2 or The Last of Us, had a better opening.

The audio books, the exploration, etc that game was awe inspiring in so many ways.

I still give it a play once a year at least

I’m a fan! Triple plat, even played the MP for fun. My apartment in PS Home was in Rapture, heh. Wish I had some memorabilia tho. I need a Big Daddy figure.

Went through it again in the last year and it was still amazing. That we got Bioshock, Mass Effect, Mario Galaxy, Portal, Halo 3, Uncharted, God of War II.....all in one year. Not sure 2007 can be topped - maybe matched, but not topped.

Play it every couple of years