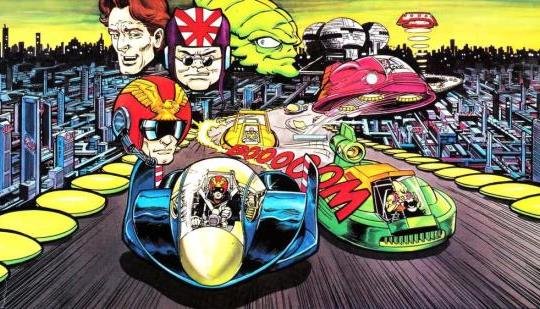 From VGC: "A Nintendo shareholder reportedly asked Nintendo to release a new F-Zero game during its annual general meeting on Tuesday.

As reported by NStyles, during the Q&A portion of the meeting one shareholder asked if the company had any plans for new titles or remakes related to past IPs.

They then specifically mentioned games by name they’d like to see, including F-Zero, Baten Kaitos, Wario Land, The Frog For Whom the Bell Tolls, Trade & Battle: Card Hero and Chōsōjū Mecha MG."

That'll be cool to see some of these tbh

Never played F-Zero but I would buy a action game with Captain Falcon from Smash instead of a racing game.

Nintendo has such a gold mine of IP its almost disgusting how they keep doing the same few things over and over. Why can't we have a new Earthbound, Star Tropics, F Zero, Waverace, 1080 Snowboarding, Diddy Kong Racing, Illusion of Gaia, Kid Icarus, etc etc etc.

They could even just enhance and release many of their 3DS games for the Switch and they would sell like crazy! Instead they will make their old school fans suffer by putting characters from those in a new Smash Bros making us think they care about those IP, only to disregard them. Im surprised we got a new 2d Metroid, I didn't think that would ever happen so maybe there's hope!

I agree with you 100% that Nintendo has a gold mine in their IPs hell some of those you mentioned...I want them too!
The problem is that nintendo is always "too careful" I mean...making a new game like an F-zero it's a finnancial risk for these people...because it might not sale the same amount as a Pokemon or even a Mario Game. So basically they are too affraid that they might make a commercial flop.
Another example...after MEtroid other M...people really didnt' like the new path Metroid took and basically they got scared the community was gonna drill them a new one. Years later they decided to give it another chance once again and tey risked it small with Metroid: Samus Returns which was basically a Metroid 2 remake on the 3ds...they risked big with Metroid Dread and the result was satisfying(best metroid ever sold)
SO bottom line is Nintendo might acually risk it is the community insists on it.

It's Time for a New F-Zero Game

Top 20 Soundtracks From the 16-Bit Era

Nintendo responds to investor asking for return to F-Zero, says it can't accommodate all requests

Is the F-Zero Franchise Worth Resurrecting?

The Case for a “Nintendo Kart”

Not Bringing Final Fantasy VII: Ever Crisis To Consoles Is A Mistake