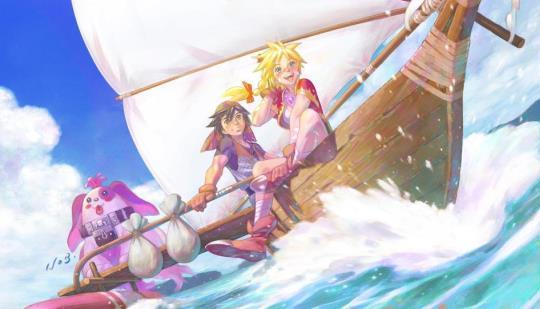 Zoey Handley: "And really, that’s all you need to know: it’s a PlayStation-era Square RPG. Can you still stand to play Final Fantasy IX and Parasite Eve? Then Chrono Cross is worth your time, and here’s an okay way to play it. Is that era too antiquated for you? Then this remaster has no chance of changing your mind. Regardless of what you think of the game or genre, it’s not a very loving or respectful port, and Chrono Cross deserves better."

That doesn’t make sense to me. The game is good and it has remastered features that improve quality of life. What, are we just scoring solely based on remaster features now?

Keep in mind this is still the game it was back then with new features that hopefully open it up to a new generation.

Imagine playing a game in 2022, with fps dropping below 20 at times, with visuals just slightly better than a game from before the year 2000 and calling it a "remaster".

It makes sense to me, honestly.

There are reports of frame rate issues during battle. Adding frame issues to a ps1 remaster is pissing in peoples faces. Especially since FF8 and 9 remasters run great.

Cruz, couldn't they just review the PlayStation version or PC version then... I hate the idea of playing the worse version and rating a game based on the worse version. That's like what happened to Yooka Laylee, The PS and PC versions worked better than the Xbox version by far and they played without the day one update, just for the sake of releasing the fastest review as opposed to making sure they can properly review a game. This is why I actually prefer DF reviews, they give you the info you need

Redesigned assets, new music, and a plethora of battle features to improve enjoyment doesn’t count for anything?

Again, the game is the same great game with remastered features and quality of life improvements. So, no, I definitely don’t agree that the low scores make sense.

I'll grab this but I still say throwing Chrono Trigger into this mix would have been a good idea.

Saving my money and putting it towards Live A Live. I don't know what it is with Square and the Chrono property but they can't seem to do it right these days. They bungled the initial release of Chrono Trigger on steam and now this. Its like they don't care. This should of been slam dunk. Instead its another black eye.

Dead Space Remake New Game Plus Guide: What You Keep and What's New