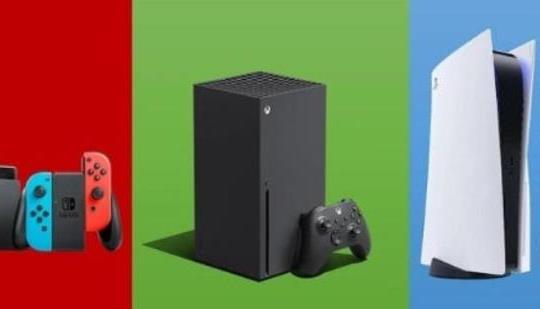 Adhttps://n4g.com/General/Sponsored/arise
- Comments (32)+ Comments (32)
TopNewestOldest
Expand all
The story is too old to be commented.

PlayStation doing its thing as expected.

Still can't get a series X or PS5, but a switch original or switch light is available everywhere... Honestly, I'm a lot more interested to see the sales when both the series X and ps5 are readily available worldwide!

It's kicking XBO (and previous xb consoles) ass. I know that seems like an easy thing to do but when looking at the PS4 & PS5, PS5 is behind PS4 [currently] by 300k units. They will be able to make that up though once supply issues are sorted out. Meanwhile, Series looks to just keep going up.

moving the goal posts out of the stadium. I remember when PS3 was behind Xbox360 by 2 million units after being released a year late. Some people played a different tune then. 2 MILLION units sounded so different then.

What...? I didnt compare two different companies, I compared two platforms from the same company.

Oh I’m sorry I didnt realize you were trying to deflect. Carry on then.

He said XSX is selling faster than XB1.

He didn’t mention PS3 (nor PlayStation at all) but since you wanted to go there we can make the same comparison for you - PS3 was not outselling the PS2, so yes, the message was different.

Soo xbox is kicking its own ass. Got it.

And PS is kicking it's own ass too, Nintendo also - and that is GOOD. Why would you not want your new product to do better than your last?

PS5 doing its thing as usual.

PS5 and XSX are going great, especially given how difficult it is to actually buy them.
Nintendo are still wiping the floor with everyone though in the current month to month sales.

I like how logical you sound here. EVERYONE is doing great! I think one is doing much better than the other no?

One product selling more than the other doesn’t mean the other isn’t doing great too - that’s illogical and not how business works.

They are all outselling and outpacing their previous console iterations - so they are all doing great. Perfectly sound logic.

“More than the other” is a bit of an understatement no? If the gap is large enough, it can certainly mean one is not doing “great”. Everything is relative.

So if Android phones outsell iPhone does that mean the iPhone isn’t a success and isn’t doing great?

Insert any other item if you wish - cars, TVs, graphics cards etc.

Seems like great news to me - And it’s great for us consumers. Competition is important.

I’m a PS5 gamer and even I can see the industry is going great and have no reservations about congratulating all 3 on their success.

Some seem to think competition is only between companies, when it also includes competing with yourself.

@darthv72 Thanks! I admit in my head I was looking at PS5vsPS4 and XSXvsXB1, I should've been more clear :D

But yeah, looking at generational growth is important. And I'm glad all 3 hardware manufacturers are doing well - the day where we end up with just 1, we (as gamers/consumers) are going to get slammed.

@Orchard
No, but if iPhone is selling almost twice as many Android, it would be hard to say “android is doing great”. Not to mention we are talking about consoles. Remember back when being behind by 2 million units was a big deal? Or have you conveniently forgot about that?

@Darth
I think if the chip shortage was not an issue, we would be looking at PS5 far surpassing xbox’s both SKU’s put together even more so than its is currently. Also I notice you already are adding up the two SKU’s of xbox even though series X and series S are technically two different consoles with different power outputs and price point.

So if we both made a product, and your product sold 50 million, mine sold 100 million - would you consider your work a failure? I bet not - selling 50 million would be great, especially if it's outselling your previous product.

"Remember back when being behind by 2 million units was a big deal?"

One could also say remember back when console sales were a big deal... nowadays there is more to your revenue stream than selling hardware at a loss and recouping it on software sales... (unless you are Nintendo)

"I think if the chip shortage was not an issue"

So the chip shortage doesn't hit Microsoft and Nintendo?

Yes, we are combining Xbox and Playstation SKU's, because that's what every analyst is doing too... when every professional analyst is doing it and you are not, you're probably in the wrong.

Both SKU's from both companies play the same games... and they both generate revenue for the respective company, why would you NOT include it in sales figures?

Ultimately though, by your own logic, there can only be one console manufacturer doing great, so I guess that is Nintendo, since they are consistently outselling Xbox and Playstation by large numbers 🙄

I tell you what, since you are content with xbox selling half as many units, lets just say xbox is selling “great” but by that logic Playstation is selling “doubly great” how is that? Maybe we should mention that caveat when we go around calling xbox numbers “great”? For clarity’s sake.

And you better believe sales numbers matter just as much as before, especially to the two of you who came to this particular thread to praise the lackluster sales numbers of xbox. Downplaying sales numbers is the only refuge for xbox fans that cant handle the truth, not even when its in numbers. Sales matters and software sales are dependent on hardware sales. Dont believe me? Look at the software sales of PS4 versus xbox one.

And yes, if chip shortage wasnt there PS5 would have a higher demand that they are currently selling and it would be bigger difference.

Nintendo is NOT as effected by the chip shortage from the looks of it. (Pretty sure this is true) otherwise why am i able to walk in the store and buy one when its selling more?

Lastly, adding up the two xbox SKUs is the trick. They are different machines sold at different price points. So yeah even TWO xboxes are sitting pretty at about half the sales of one Playstation.

I see you twisting and spinning, but you cant get away from facts.

@S2, you and many more get it wrong every single time when trying to downplay the Series vs the PS5. by saying one has two sku's while the other also has two sku's. It doesnt matter if the only difference in the lack of an optical drive... the point is they do NOT use the same barcode (sku) at retail and they are NOT the same price. It is the EXACT same situation the PS3 and 360 were in in the 7th gen. 360 had a sku with a hdd and one without and each were their own price and model. PS3 also had two sku's one with 20gb and less features and one with 60gb and more features.

You (and other like you) obsess at the specs inside when its NOTHING to do with the specs but the games and right now there are NO games exclusive to the Series X that cannot be played on the Series S. you will continue to fail at grasping that very basic concept that product lines can AND do have variants to offer at different price points for different consumers. Looking at the 8th gen, both MS and Sony only released one sku each. 500gb XBO w/kinect and the 500gb PS4. They didnt start making variants until soon after.

You can try and downplay the current success the Series is having by saying the PS5 is "doubly great" but AGAIN you fail to understand even basic math. For something to be "doubly great" it would have to be literally "double" of something else. And right now it is 18m for PS5 (combined) and 12m for Series (combined). That isnt double my mathematically challenged friend but only one and half as good. The current ratio is 1.5:1 not 2:1. And to another point you made... yes the xbox is kicking its OWN ass which is what you want out of a product that is new. It shows whether or not it is being adopted better or worse than a previous product. Like i said, competition is NOT just about one vs the other, it is also about how well something is doing in relation to previous products from the same mfg.

Ok and Nintendo is selling 'five times great'. So what? It doesn't remove my enjoyment of my PS5.

"Nintendo is NOT as effected by the chip shortage from the looks of it. (Pretty sure this is true) otherwise why am i able to walk in the store and buy one when its selling more?"

Store availability varies regionally. I have never seen a Switch OLED or XSX, but have managed to acquire two PS5's with ease. It means nothing, PS5 is still difficult to find for most people.

"adding up the two xbox SKUs is the trick. They are different machines sold at different price points"

"I see you twisting and spinning, but you cant get away from facts."

The only one twisting and spinning here is yourself.

Impressive numbers for Xbox Series. I lucked up and got my hands on a Series X but they are nearly impossible to find.

I know, and PS5 is doubly impressive.

And to think their deals only start to kick in this fall. Series X launches 11/11/2022 with Starfield and then re-launches with Cod exclusivity in 2024. Will be lots of PS5's for sale then

I want to buy PS5. It remains to wait

Evil Dead: The Game Single-Player Guide: How to Beat It's Not Gonna Let Us Go!

Sniper Elite 5: How to Unlock Every Campaign Character Skin