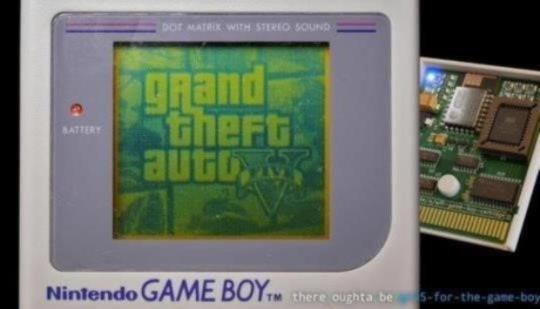 A determined coder and a hardware aficionado managed to make Grand Theft Auto 5 run on an original Nintendo Game Boy.

Adhttps://www.youtube.com/watch?v=EjfojxXOobE&t=463s
- Comments (8)+ Comments (8)
TopNewestOldest
Expand all
The story is too old to be commented.

Before the enhancement !, this is how gta games gradually been hated and thrown away , it has never been a satisfying experience when you done with it.

Made it run, but calling it playable is a laugh.

It's impressive that they've got a streaming option in place, but I'm not a fan of when people say "playable on" or "running on" when it isn't being rendered natively. Yes, the wording technically works, but streaming on something isn't the same as running on something.

When that person modded Doom to run on the pregnancy test, that was running ON it. I could also say GTA5 is now playable on my 10 year old Android because I can stream it there lol. Again, super impressive streaming cartridge, but that's the star here, not the Game Boy or any specific game being streamed.

Just need the Game Gear, Lynx, and Turbo Express ports now. It's an interesting idea I am sure a lot of love and work went into this type of project to do. That's one thing I like about modders is they are very passionate about their work and will take the time to pull off some of these great mods and the fact they are willing to show you their work as well.

That's incredible. There are a lot of talented people out in the world.