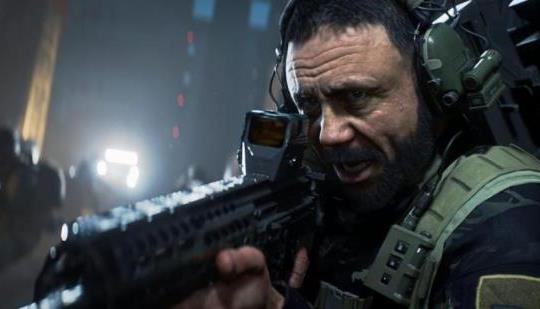 techraptor.net
- Comments (33)+ Comments (33)
TopNewestOldest
Expand all
The story is too old to be commented.

Who had the dumb idea to remove the scoreboard in the first place.

I agree but its still massacred as someone that is not 3 inches away from a screen hunched over i will have a hard time reading it.

This is way better but on a ps3/launch ps4

It's about making it an environment that avoids any negative emotional reactions, why would you feel bad If you didn't see that your overall contribution was pathetic.

"Don’t be sad, this is just how it works out sometimes"

Let's not forget that on the other end there are players who are very competitive and want to see their names up there in the Scoreboard. So Screw the losers and long live the competition !!! I would just put icon of dudu/crap/shit next to the ones who are performing the worse !!

That is such a messed up reason to not have a score board. If that bothers people, maybe they should go read a nice book or take a walk outside.

But players can still be killed, that has a huge negative impact on impressionable minds. Star Wars Battlefront II and fully invincible players on the other hand is a masterpiece. If no one can die, there are no losers either. Such a bliss! Too bad toxic players want that to be fixed...

And obviously the fact that the game was rushed

This has to be one of the most botched video games in my entire life time. I'm not certain if they kept the scoreboard out to appease the snowflake generation, or if they just didn't put it in because of time and effort...because slowly over the years they have changed it to only include kills without deaths. I had such high hopes for this game, now I might never purchase another Ea game again.

I find it hard to believe that they purposely left out the chat and scoreboard due to potential hurt feelings. They probably didn't have time and the scoreboard for all of the additional player count was still under construction. If they did though, I say this "HELLO! WE HAVE A MUTE BUTTON!!!!!!" PUT IT BACK IN!

I have no idea of your life span but just to name couple games that standout and say 'please hold my beer'
Cyberpunk 2077 and Ghost Recon Advanced Warfighter for the OG Xbox. Not the Xbox 360 game which shared the same name but was very different . The OG Xbox game was a disaster both the OG and XB360 versions released the same day but they never bothered to fix the OG Xbox version. I think Microsoft pushed Ubisoft to move on as MS wanted as many gamers to move on to the XB360 and pretty much stopped all support for the OG Xbox the day the XB360 released I can't be the only one that remembers that.

It's insane that this came out literally less than a year after Cyberpunk. Clearly, the industry is not learning.

Consumers need to absolutely punish them by just NOT pre-ordering or buying.

played every single BF game to death, I played the free alpha for this one and after 10 mins I quit and knew it was a complete garbage and waste money, from my understanding EA brought a new game director who has no sense of what is a BF game, she removed all the best feature of BF, made the game more "fortnight" kids friendly and tried to copy features from COD half assed the game to release and call it a day, now they brought some outside advisor to fix the game, but apparently he did not like people complaints to much, with that I can truly say BF is dead . mourn and move on

Gave the open beta a go for an hour or two and came to the same conclusion. Not what I expected out of DICE. They have been slowly losing their way over the years though.

Like most games these days, day one purchases are for the beta testers and the game is brought into shape in the years after release. I've come to point where my time in precious and I'm not going to pay full price to beta test these games anymore.

Not "Som outside advisor" The people working on it are supposedly the original crew.

CantThinkOfAUsername117d ago (Edited 117d ago )

What a load of nonsense. You are mistaking Kate Saxons (the voice director) for the game's creative director, Lars Gustavsson, who was one of the producers of Battlefield V and the creative director of Battlefield 1 and 2142 as well as one of the directors of 4 and Bad Company 2. He was involved in every Battlefield one way or another. He's got quite the resume, which is surprising given the state of 2042. This pretty much indicates that the suits with their amazing non-gamer brain cells are responsible for this hot mess.

This game was doomed from the start. A game with a 128-player mode, tons of vehicles, large maps and a waste-of-money weather system that has to look at least as good as BFV and to run on 2013 machines with tablet-level processors. Suits' eyes seeing nothing but Warzone and its $1 billion a year 'microtransactions.' They even managed to eff up Portal Mode, the only part of the game that had potential, with their weird decisions. And on top of all that, It was rushed out for the holiday season. Then EA comes out to pretend it's very disappointed with the game.

Imagine making a multiplayer shooter game with no scoreboard. Only EA lol

Its really sad how a "Scoreboard", something that has been in every Battlefield game, needs to be implemented in a update.

well, people wanting big Epeens on scoreboards will kill the rest of what was left of the population. I didn't like operators but the scoreboard was a welcome omition

The fact that the main focus seems to be bringing a scoreboard back in a AAA online only multiplayer shooter, two months after release..it's baffling lol. And still we won't be seeing it for at least a month . And the scoreboard draft they showed us, seems to be absolute trash 😄

What a time to be alive. It's unreal.

Do you have a link to that draft. Id love to see just so i can see for myself how bad they may have botched it.

Too little too late. I've already moved on. Should have had traditional scoreboard from the start. As well as many other common BF features. My main issue is really not the bugs, its the DIRECTION EA is taking Battlefield, maps suck (except Manifest and Hourglass to a extent), small amount of guns and they are boring to use except the NTR, no class system and that's not even half it.

Tom Henderson recently tweeted EA is dissapointed with performance of 2042... yeah no shit. We didn't ask for all the crap you put into this game. Why can't you dumbasses just give us a traditional BF game. That's all we ask for! Or hell just give us Portal with all the maps and guns from the previous BF hell I'm all for that.

Now they are thinking about making it F2P. These these peabrains just don't get it.

I still cant believe people bought into the hype of this one. Let me tell you what I saw leading up to this release:

I saw a developer/publisher that broke a “promise” and abandoned support for their entirely botched previous game far ahead of schedule with the transparent excuse “we’ll do better next time”; signaling that their word means absolutely nothing moving forward.

Then I saw a try-hard, trailer for their next game that was meant to make me remember all the good times I used to have playing their games. This trailer also clearly spelled out that the gimmick this time would be a tornado. Wow…

Then they announced that they were adding specialists so they could be just like other games that their target audience likes. Oh and they assured us that classes weren’t gone, wink wink.

Then we got to play the beta. That was something. The list of missing features at this point is astounding, and only a month till release! “Im sure everything will be fixed before release in a month”, said a small but vocal group of ostriches.

Finally there was the second beta or “early access” period that definitively showed the world that this game was not ready and has too many core design issues to possibly ever be what fans want.

For as hard as they tried to show us this one would be different than the last, their efforts were completely transparent if you were paying attention. What we are left with now is a battlefield game that is so bad, their previous effort looks like a masterpiece.

Scoreboard updates are trivial at this point. There are non-binary characters flying around my screen with squirrel suits, complete lack of classes and factions, shocking amount of weaponary and maps, a portal mode that the community would rather ignore because of XP issues and the game runs poorly with higher tick rates being found on games 10yrs older (bad company 2 PC for example)

When will these genius execs realize they probably should try to fortnite everything. If they put the time into this franchise an made it closer a realistic simulation, they would have their own space with tons interest. Also get more creative with the theatres and go black powder instead of rocket packs and santa hats.

All 7 players are going to be ecstatic.

This is what we have to get excited about now? YAAAAYY!!!! They're putting the scoreboard back in!!!! Alright!!!!!
LOL. It's like getting a car with no tires and getting excited about getting the tires three months later.

It say's it all that the scoreboard is the “highlight” of the update.

Battlefield 2042 Drone Flying to Be "Resolved" in Next Patch, Throwables Thrown Trophy Removed