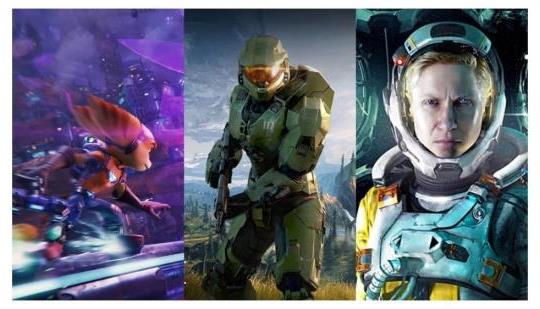 Twinfinite: “It's awards season here at Twinfinite and today we're running down the best console exclusives of 2021. Let's get into it, shall we?”

twinfinite.net
- Comments (42)+ Comments (42)
TopNewestOldest
Expand all
The story is too old to be commented.

Well. A success where? On pc the only place with numbers it avg 31k players in comparison the old destiny 2 got 58k... On consoles we don't know nothing. Just the fact that the game wasn't number one on the charts on December. I don't even know. If any halo wasn't number on the month it was launched.... But yeah it really made the diference...

It was number 2 right behind COD and even sold better than Pokemon. It beat out Battlefield though that game was atrocious mess, so that's a given.

It was only number 2 behind one of the most popular game of all time that's on multiple platforms. So terrible....

In thought Xbox gamers don't buy games anymore. What happen to that?

Yes it's bad. Because halo 5 was number one... This one wasn't after 6 years without a halo game... Xbox gamers don't even buy games on Christmas... Scary stuff.

That was a launch month. How about to see Halo legs in the NPD chart for January next month?

Maybe they're ranking based on how much fun they had with each, old fashioned concept I know.

Don't take me wrong. I think forza and halo are great games. This is just talk about numbers.

I really like this Halo game. And I am glad it is back.

I have played thru most of the campaign, and it is just a lot of fun.

MP also a lot of fun.

But it isn't flawless. In the campaign, you should be able to replay missions and it desperately should've shipped with Co-op. Also, bad things happen with quick resume.

On the MP side they still have to have a full fix for match making.

The both looked next gen and were pure joys to play, i platinum'd ratchet and finished basically every race avaiable on forza 5s map not including any online stuff.

Halo was fun and i enjoyed my time with the campaign but the story wasnt great and the graphics underwhelming. Id put resident evil i ahead of that aswell.

But hey each to there own

Halo Infinite's graphics are great. I don't know what you're talking about. If you don't have a Series X just say that.

It looks like Halo. The graphics are decent but nowhere close to being among the best currently. It's a fun game to play and with a few tweaks (progression and various minor concerns) could be a great multiplayer game. I think the visuals are competent but not a big selling point for me. Games like Resident Evil Village and Metro Exodus blow Halo away visually. Forza Horizon 5 is also a more graphically impressive game than Halo. Ratchet is definitely the most graphically impressive game that has been released on a console so far, some of which is due to Insomniac being way ahead of other developers in the first year of the new generation of consoles. I expected games to start to look like that within a couple of years but not that fast. The use of reconstruction or upscaling to get both a balance of performance, ray tracing, and graphical detail is also where I expected developers to arrive in a couple of years but Insomniac decided to make that within a couple of months instead.

I have a series x thank you very much, and no halos graphics were not great, it wasnt bad either just expected more from xboxs biggest ip

Ratchet was great, but it felt like half of a bigger game. Returnal just didn't do it for me, roguelikes are not my cup of tea. I found it rather annoying honestly. I tried to like it, even came back to it for another go recently but still just could not get into it. Forza Horizon and Halo were told for me. I have GP but still bought copies of both.

Did you beat returnal?

I have a friend who was also annoyed but only because he kept dying. He kept at it and is now playing much better and clearly loves it.

Same. As soon as I beat the 1st boss and got my way through the 2nd biome the game kind of opened up for me. It just took time to get used to how to not die. It was really rewarding being able to overcome the challenge.

Yeah I'm going to give it more chances but I don't like that I have to try so hard to like a game. I have a feeling it will click eventually but I just havent hit that sweet spot yet.

For me returnal was the best. Only because it stuck with me months later. I sold it after I beat it and now I regret it because I'd like to keep playing it. That's never happened to me. 5/5

Halo infinite was probably the worst console exclusive for me since I don't like the open world and I don't like that it released incomplete. Also don't like the monetization scheme at all or the customization. It's got great gunplay but I need my games to have a little more than just good gunplay. Didn't like the story either. Bosses were pretty mediocre...I mean if you've played either doom game you'd know what I mean. 3/5

Ratchet was a great platformer. But it's similar to me as guardians of the Galaxy. Nice pretty games but overall it didn't leave an impact. Great characters and great dialogue though. 4/5

Forza...I'm not a racing fan...I'm a burnout fan so I prefer destruction like car games. But if someone really loves car games..I'm sure this game is great but I can't be the judge of that. The only genre I don't think I could review appropriately.

Halo horizon 5 and back 4 blood were so good

Most fun I had with a game last year.

Ratchet conflicts me, having just played through it. It was charming, so well paced. They juggled between Rivet in a way that made her seem just as important a character, without making it feel like she was an "other", like Arbiter felt in Halo 2 or (god forbid) Locke in Halo 5. I got the platinum trophy after playing it for just over a week, loved every minute and it really is as beautiful as it's been said. That 40fps mode should be standard.

But it just felt like, more Ratchet, with quick load times. All the new PS5-exclusive tricks the entire game has to show are shown in the opening level. The fabric of reality breaking down only conveniently shows you rifts of the worlds you're going to visit.

Even though I still suck at Returnal, it's kept me itching to come back to it. I haven't because.... I suck, and need to focus, but compared to anything I played on PS5 last year it's a refreshingly new kind of experience.

... and that's kind of what I felt about Metroid Dread, compared to its predecessors. It was a quick game, but introduced the EMMI bots and atmosphere-changing elements around them. Samus' traversal feels better than and smoother than any before it, without compromising on the difficulty.

Halo Infinite, I would also put this at the top of my console-exclusive list. It's not the most next-gen, but 120fps multiplayer with Halo's gunplay - it can not be any better, mechanically-speaking. I liked the story and want to see where it goes next, but that was far from the best thing.

The High-Value Targets, their personal weapons and the variety of the sandbox. Being able to fly *anywhere* in the game's world in a Wasp, drop out and lay havoc, is the most fun I've had in any Halo campaign. Second to that is the grappleshot; flying through the trees, soaring across enemies as a quick escape, or just shocking an enemy close by and using the grapple-melee ability. It's the closest any Halo campaign has gotten to actually letting us be the super soldier Chief's made out to be in cutscenes and the books.

There are also 2 other PS platform gaming console exclusives...Deathloop & Kena that were also released in 2021.

Honestly, I actually forgot about those. I played both on PC.
That's not a slight. I have a PS5. I just really have it around for legit hardware exclusives like Ratchet and Clank and whatnot. If I know something is coming to PC, I don't really pay mind to what consoles it may or may not be coming to.

I finally sat down and actually out time into Forza.
I'm not a huge racing guy, but the game is a blast. There's just so much to do.

Playing around buying and selling in the auction house is a game itself.

Agree 0Disagree 1
▼✖-+
SPAMInappropriate
Show all comments (42)
The story is too old to be commented.
20°