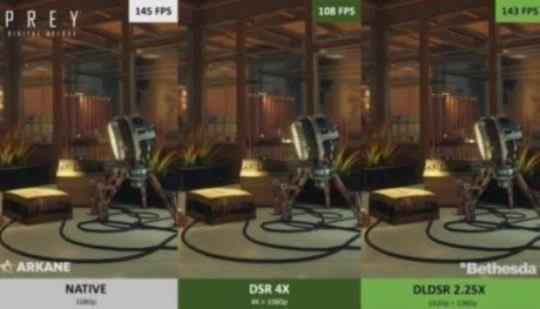 At CES 2022 AMD announced it is releasing a new feature based on FidelityFX Super Resolution called RSR (Radeon Super Resolution). The company confirmed that this technology will arrive with the new drivers somewhere in the first quarter. AMD FSR is a full-screen upscaling technology that does not rely on software implementation by game developers.

Meanwhile, NVIDIA made a surprising announcement today of Deep Learning Dynamic Super Resolution technology (DLDSR), which is an AI-powered Dynamic Super Resolution (DSR) downscaling technology that has been available in GeForce drivers for a while now. The DLDSR is an improvement over DSR that adds an AI layer powered by NVIDIA Tensor cores. This also means that this feature will be exclusive to NVIDIA RTX GPUs.

videocardz.com
- Comments (15)+ Comments (15)
TopNewestOldest
Expand all
The story is too old to be commented.

How many letter will they add...

I know right. As long as the tech is good I'm not fussed how may letters though.

This is what competition does. Can't wait to try it out

They need more excuses to act like machine learning cores are the second coming of Christ.

Not seeing the issue here. They're literally just covering a technology that allows people to get a lot more out of their GPU with little penalty.

If this was happening on a certain console, you definitely would be treating this as the second coming of christ.

Glad they didn't use confusing verbiage such as "dynamic DLSS," which would have been adequate for a lot of people to understand what it was just from the title.

Nice. So based on the picture you can raise quality almost with no penalty in games which doesn't have dlss.

There'll be a penalty, just far less of one. BUT, I'm far more interested in the fact this seems to be using DLSS across the board on any game to upsample before it downsamples. So maybe this indicates a driver-level DLSS option may be coming soonish?

First off, I'm super interested in the fact that this sounds like it is using DLSS on any game to upscale before downscaling. No Nvidia feature currently allows you to use AI to upscale on any game that isn't expressly supported. I wonder if this is the first signs DLSS may end up becoming a driver-level feature at some point soon.

That said, this isn't a response to RSR. RSR is essentially FSR on a driver level that you can use in any game and simply upscales the lower resolution image, much like NIS or DLSS, to give you better performance than you would at native resolution. DLDSR is actually just the DLSS version of supersampling - this is opposite of FSR/RSR, as it is going to cost more performance to do than native since it is over-rendering.

Without DLDSR here, for example, you'd render a native 4k imagine and then downsample to 1080p. However, in this example DLDSR is - hold tight lol - upscaling from 1620p with DLSS up to 4k, and THEN downscaling that to 1080p to get a supersampled image with DLSS like performance.

This means nothings if it's exclusive to RTX GPUs. Fidelity FX is great for what it is because it's available to everyone.

Set your sights with Sniper Elite 5 on Xbox, Game Pass, PlayStation and PC