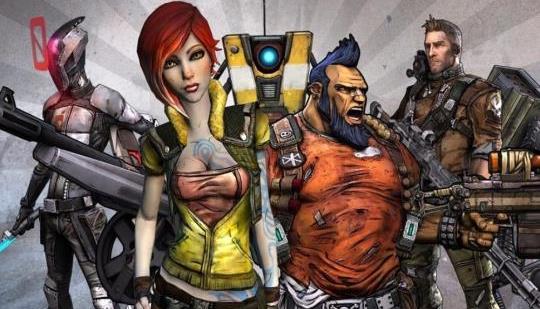 COG: Sometimes, you need to shake things up. Come with COGconnected as we take a look at 5 video game franchises that badly need a reset.

cogconnected.com
- Comments (42)+ Comments (42)
TopNewestOldest
Expand all
The story is too old to be commented.

no way does borderlands need a reset. the only thing wrong with 3 was that annoying spoiled brat ava. everything else was great

I was burnt out after Bordlands 2. The bazillion weapons thing was cool, but it's just an incredibly repetitive series of games. It's the same thing, over and over within a 'new' environment with a new set of annoying side characters.

Tiny Tina's wonderland could be a lot of fun, but we'll have to wait and see how different it really is.

The entire story of 3 was trash.

Borderlands is being reset. Wonderlands. Whether it is better, we must wait to see.

The first game was best to me. Second and third were boring so I never finished them and the Pre-Sequal was good.

Yes the first game was the best imo. Second was solid as well. Third just didn’t have the same feeling anymore.

I thought 3 was decent until I got to what happened with Maya, and then seeing those two obnoxious twerp villains repeatedly play a taunting video of that debacle... Didn't feel connected with it much after that.

I played through the first one several times, then really really enjoyed my play through of the second.

The third one felt like a relic of the past to me. Playing it coop it was hard to see through the on screen carnage to understand exactly what was going on. Constantly looking through menus to work out which new weapon with very slight upgrades over the last was the one worth using. Constant backwards and forwards fetch quests and endless mindless shootouts.

I really didn’t enjoy it

Couldn't have said it better myself

Surely they know Village is RE8?

We need to normalise retiring long running series over resetting and rebooting. Developer creativity is being stifled in favour of selling familiarity over and over again

Have you looked at movies, music or rehashed stories in fiction books? Don't go expecting much if they chuck out what is already here.

I've always found that interesting. I honestly do not get why brand familiarity somehow equates a quality experience over the unknown and inherently "alien" attributes of a new IP.

Proven by sales I guess but it limits a developer being stuck to the same title for so long. Theres only so much they can add or change and still keep properties familiar. At least with new titles they can explore more and go nuts.

Borderlands 3 was the 4th game, not "a third game in the series". The next game they are making while you might call it a reskin is already trying something new with Tiny Tina.

Reading these comments I feel there is some slight confusion over exactly what tiny tinas wonderland is, and more importantly a misunderstanding of the scope of the title.

It’s essentially a stand alone add on, probably larger than the last tiny Tina add on from borderlands 2 (I think that’s what it was).

This game will be 10-15 hours at best, and is just a reskin of borderlands 3 in a fantasy style. More melee weapons and your ranged gun style weapons will all be magical attacks and bows.

But it’s most definitely nothing more than a reskin.

Then they better completely redo their marketing campaign. Even the official site says it's a spinoff.
At no point in anything I have read or seen does it indicate this is a bloated DLC or expansion pack or whatever you want to call it other than a fully fleshed out game.

Did I miss something? LOL I hope not because this is one of the few games I have been looking forward to

Riddick did get a sequel

The Chronicles of Riddick: Assault on Dark Athena. Solid game, but nowhere near as good as Butcher Bay.

Ooh that is a tasty list, wow. Agree with all!

Yeah man. Chronicles of Riddick: Assault on Dark Athena. It was a proper sequel with much better graphics and great storytelling. It also included a remaster of Escape from Butcher Bay in the updated engine.

How the f**k have I never heard of this lol

Yeah no one talks about it. It released on PC, PS3, and 360 ages ago. I really enjoyed it. It had some flaws, but it did a lot of things better than the first. I'm hoping for either another game or a modern update of both games with raytracing.

Vin Diesel mentioned last year that he's working on Riddick 4, and that they could use a new game to add a new chapter to the overall story. So there's hope at least.

Damn it’s not on Xbox store. I want to play it lol.

AC's reset was three games ago so it's a little more valid, but Valhalla has gone on to be the quickest selling of its franchise as well. They've at least quit pushing out annual releases and truly do support it as a platform more than just as a single game.

Borderlands... we need to see what happens with 4 after the Wonderlands spin-off. It's the OG looter shooter and while the humor isn't my style, it knows its identity and was never rushed & shoved out the door.

Far Cry & COD: Give these suckers a rest not a reset. Everything that used to be unique in FC are now fully in AC, and COD has lost all its meaning to me with three main developers pumping out main entries year after year, all in different time periods with different features that disrespect their own history, while Warzone also exists on its own receiving its own full content updates.

How about franchises that need to see the light of day again like Parasite Eve, Wild Arms, Dino Crisis, Grandia. RE Village was a great game I enjoyed it RE 7 was just as good I like the whole first person point and the introduction of new characters. The werewolves alone in RE8 are what made me excited for the game great idea. Borderlands 3 technically isn't even the third game if you count the Pre-Sequel in the mix. Thing I hated about Borderlands 3 was the special chest crap. I am stoked for the new Tiny Tina game. FC 6 honestly only funny thing was seeing Danny Trejo after that I got bored of it.

I know it's subjective, but list is bad, mentioning only very popular franchises.

Resident Evil was just recently got a reboot (or reset if you will) and, IMO, it's much better than Resident Evil 6, in every way.
Same goes for Assassin's Creed and Far Cry, though, Ubisoft turned them into a samey RPG-lite.
Call of Duty just needs to die already. They have 34 games released in 18 years, almost 2 games each year. This is beyond ridiculous.
Personally, i don't care about Borderlands that much, but i don't think Gearbox can muster up anything interesting anymore.

I think, such huge franchises need to rest, you can't improve upon the same formula for this long, unless you drastically change the game.

If you think something is worth rebooting, it's probably older franchises, like Parasite Eve, Interstate, Oni, Shatterhand, Act Raiser, Eternal Darkness, Condemned, Contra. But even then, personally, i think we should move on. Developers should make new games in new series, with new characters, new gameplay systems and so on. There's only so much you can innovate before it becomes stale.

I'm still wanting a sequel to Condemned 2 though.. it left on that damn cliffhanger!

If you're talking about games that release regularly but are stale AF then Far Cry has to be up there. Good gameplay, good budgets but boring from kick off if you've played more than one from the series.

I reckon a whole new creative team could really help the franchise, there's potential there but they're stuck in a rut.

Agree with it all except resident evil

Tenchu
But it would be an uphill battle for that series now after Ghost of Tsushima.

Add Tekken and The King of Fighters to the list..both are the same again and again

Agree 0Disagree 0
▼✖-+
SPAMInappropriate
Show all comments (42)
The story is too old to be commented.
160°Heating Up9

Zelda: Breath of the Wild 2 Would Benefit From Encouraging Unique Builds

Kao The Kangaroo Review - It's a Knockout | COGconnected