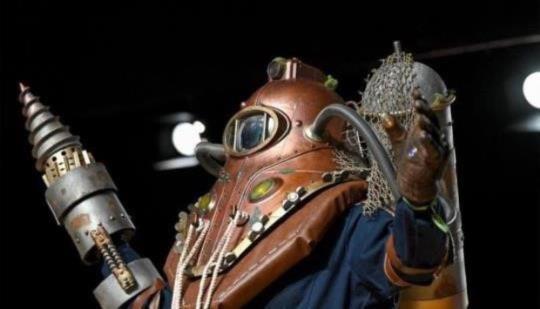 Eight years ago, BioShock creator Ken Levine started Ghost Story Games to create a new, unforgettable experience. Since then, the game has allegedly entered "development hell" and has seen multiple reboots and changes in direction.

Add this guy to the list of game directors who should have learned to be a team player and kept their ego in check along with Warren Spector, Peter Molyneux, Cliffy B, David Jaffe, and Tomonobu Itagaki.

Read "Press Reset" by Jason Schreier. Levine definitely isn't a team player. I don't know how much of that is ego. You cannot deny he's a genius creator so people put up with it. Steve Jobs was kind of jerk but people put up with it because he was a visionary, I believe it's really the same thing here. The question is can a great game be made without having a personality like Levine leading it? I'd assume Ted Price over at Insomniac games or Even Wells at Naughty Dog prove leadership doesn't need to be so abrasive to create great games.

Reading through this currently and the story Warren Spector is equally as interesting and he doesn't come off as egotistical but rather a visionary. Ultimately, it is more often than not that the artistic folks don't jive with the money folks.

Hope they right the ship because I loved the Bioshock series and early accounts of this being a sci-fi shooter in the same vein sounds tantalizing.

@calactyte, Ted and Even are awesome examples of great leadership. It’s an utter shame that Druckman is up there now mucking up Even’s waters and legacy.

Look, I'm not saying Ken is perfect. But he doesn't have an ego. He's actually been very humble whenever I've interacted with him over the years, especially compared to other devs I've spoken with. Not being a team player doesn't mean someone has an ego.

As far as Jason Schreier goes, I don't put much weight into anything he says anymore. I used to really respect him, but over the years he's increasingly become more of a dickhead. He hijacks other people's stories, he takes leaks he finds on places like Reddit and claims he "broke" the story first, and he increasingly blows stories way out of proportion like it's the end of the world. There was a time when he was a great journalist but that was years ago.

Cliffy B went from one of the most celebrated names in the industry to being unable to give away his games in like 10 years.

Tfs goku: I get it

The team that made bioshock infinite should have never been stripped down to began with. Apparently AAA was too demanding at the time, yet Bioshock Infinite didn’t take 8 years to make! Studios get shutdown for not generating revenue.

Irrational Games shouldn't have been closed. Instead Levine could've downsized Irrational itself & kept it running with a smaller team & moved the extra devs & artists to the new Cloud Chamber Studio.

But that's what he did, Irrational Games was downsized and rebranded into Ghost Story Games, Take 2 Interactive is still their parent company. However, Cloud Chamber is a completely different studio (also part of Take2) opened many years later on the west coast of the US (Irrational/Ghost Story Games is east coast).

Basically, no studio has the money to keep 600+ people on a payroll for long when there is no project funded by a parent company or a distributor. Otherwise, if you made a hit game you're prone to produce endless sequels, which he obviously didn't want to do.

A few developers have come out in defence of Ken Levine. They believe Jason Schreiers write up is baseless, unfounded and the result of some feud between Levine and Schreier just to take a swipe at him.
I respect that Schreier has uncovered some shite in the past but he's a try hard too. Doing his best to throw some dirt and see what sticks.

It's tough to tell what's going on here really. Maybe Ken isn't the easiest person to work for but then again maybe he just expects the best output from his developers. That doesn't immediately mean abuse in the workplace. You can see it in many different professions now. Any form of correction has the sensitive puppies up in arms. Maybe he's an Ass, that won't surprise me these days either.

There's two sides to this and we honestly don't know either of them. Schreier should keep his mouth shut until he has something a little more substantial than the trash he threw up on Bloomberg here, with no example or evidence to base it on.

He based it on talking to former employees and with 8 years and nothing to show obviously this guy failed at his job.

There isn't mention of abuse, harassment, or anything legally questionable in the article. Did you even try to skim through it? The worst is a lash-out in front of the team. This article existing is one side of the story, how can you write all that and say we don't know either one?

And Schreier tried to get both sides: "Take-Two didn’t respond to requests for comment. Through a representative, Levine declined requests for an interview." That's not his fault Levine & Take-Two won't defend themselves - it's theirs for letting these dev stories stand unchallenged.

Haven't heard anything for ages so not too surprised

Anyone who was paying attention knew the project would have to be restarted last year. Ken Levine was really impressed by the Nemesis System from Shadow of Mordor. He wanted to build on that concept and find new, innovative ways to tell a compelling story. But Warner Bros. patented the system a year ago, stifling creativity in the process. After 7 years of work and experimenting, Ken can't even use the system he was building a game around.

This is one of the reasons I hate when publishers patent game mechanics/concepts, Sony recently patented the strand concept from Death Stranding for example. The entire industry was built on inspiration and building on other people's ideas. That's how progress is made. Doom and Wolfenstein 3D technically weren't the first FPS games, but they were extremely innovative and are largely considered the first traditional games of the genre. Imagine if id Software had patented the ideas and concepts they used to create both games.

Even Shadow of Mordor itself borrowed very heavily from the Arkham games and Assassin's Creed. If you're taking ideas from everyone else you have no business patenting anything.

I hate TakeTwo, and I’m not at all advocating for crunch but sounds like things would have been better with at least some form of deadline. Hate to see this turn into some perfectionist unfinished magnum opus.

Oh I’m sure the unplanned MS accusation and their wants/needs had nothing to do with it.
Their Cushy Comfort zone was crushed.

Honestly BS3 and especially the crap DLC was a mountain of “we are out ideas”. Slap a 5th grade science constant and variable spin it and go. It was lazy and amazingly enough they can’t figure out what they are doing next. Welcome to Duke Nukem Forever syndrome.

I worked with someone who was working with KEN LEVINE as a level designer 8 years ago . And he told me Ken Levine was a nice guy but....,,.

Well, I was wondering why we haven't heard anything in eight years.

Sad to see some people getting hysterical to the point that they mark as spam a simple opinion. Not surprising though. So go ahead and do it again.👍

"I'm not surprised. His game design has been getting worst and worst since the System Shock 2 days. Ever since the design has become more "story"-centric, the gameplay has suffered and gotten more simplified in order to accommodate the narrative.

Bioshock 3 was the culmination of this mandate. Where the gampley was nothing more than a simple FPS and having to play second fiddle to that cluster fuck of a convoluted story. The world was just window dressing and sterile were there was little input from the player when it came to interacting with the world, events, NPCs, etc. Even the Elizabeth's AI was a joke. Nothing advance about it. Just set her to be ignored by every other NPC in the game and presto. Magic baby!

I get confused as to how some of these people come from such amazing, forward thinking and gameplay-centric game properties, all to end up wanting to be Movie Directors. Chances are that since there is no longer an unlimited budget, these two philosophies are at odds once again and this is what causing this game to be in developmental hell.

And all this without getting into how he treats his employees..."

It not surprising. The foundation of the game sounded incredibly ambitious and complex. His example was a completely dynamic Skyrim world. Every branching story changes depending on your actions using something like the nemesis system. He said he was dreading writing the endless dialogue that would entail. He left to a smaller team so he could experiment and fail without having 200 people wondering what they are supposed to be doing.

So all in all, this is what he left to do. If he’s sitting on a pile of cash failing over and over then just know that’s where he wanted to be lol. When it finally does come out it will be awesome, I’m not worried in the slightest.